The March 2019 Update is COMING SOON! 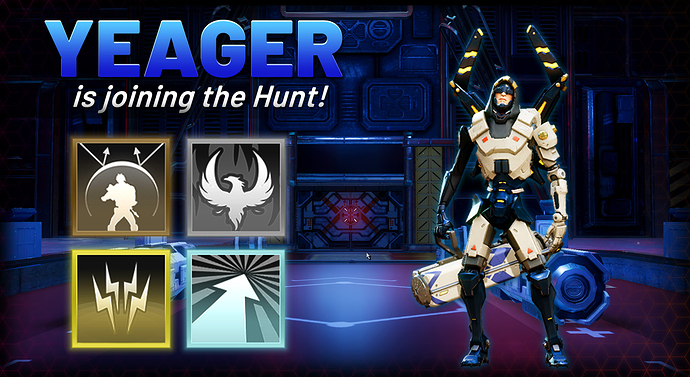 No updates to Role Warfare this month, but keep your eyes peeled for further adjustments in future updates!

Any chance you can give us a preview of what Yeager’s abilities are? Definitely looks like he’s got some sort of flight capability in addition to his shield, which is pretty exciting to get a look at.

Click on Yeager’s name to go to his topic!

ETA: I have it now, thanks! Looks kind of like Steele, in that he creates a personal shield for himself and you need to keep attention off of him (and his shield) in order to get him up to full damage.

My Gauntlet guess was right!!!

And I just made Surge 10 stars…

Though I’ll miss Castellan in the PVP store, I look forward to getting the chance to work on Hivemind.

One thought, no new skins?

Any news about alliance war? The in game message talked about it, but no informations here!

So, did I see Kurtz revealed? The ‘Weak Link’ part of the in-game update announcement had a pic of Kurtz, right? And what’s this taking power from the weak?

Alliance War Open Beta is planned for next week. We’re still getting a lot of last minute changes in before we kick it off. If we don’t break anything you can expect it to begin then.

This recent update just feels like we need to spend more gold for the same stuff we had.

Logging in? Stuff? Touching my phone?

This is the worst update as far as I’m concerned that has been released. Your charging us more gold for everything. 8 frags a day max for Yeager puts it at 7.5 days to get him with 1 free Helios a day starting at level 25+ which is 1 frag…then we have to use gold to reset in order to reach a high enough level raid to get our max of 8 frags for Yeager in the 24 hour period…it would cost me $60 u.s. in order to buy enough gold to purchase Yeager straight out instead of just flat out paying $30 for the new hero you guys doubled the amount of money I would have to spend to get the new hero

Please don’t take this comment down or flag it because I would really like to discuss what’s going on with this game I have played it for over 1 year now and I feel it just went 100% pay to win!

I really hope alliance wars is good because most of us will not have the new hero by the time bounty gets here because of needing to reset…you guys didn’t fix it to where we could have the new hero for the 1st bounty you made it harder! Please lets discuss this

Actually, you don’t have to start at lvl 25, you can play whatever level you’re high enough for right off the bat.

I just got on and noticed the issue relating to Yeager Frag reset is being fixed, came here to see if there was any answers… Only noticed one screen shot displaying the issue.
I like how we are able to go into any level co-op without unlocking them!!

If anyone hears about any info on the issue with fragment capp please let me know!
Thanks
-J