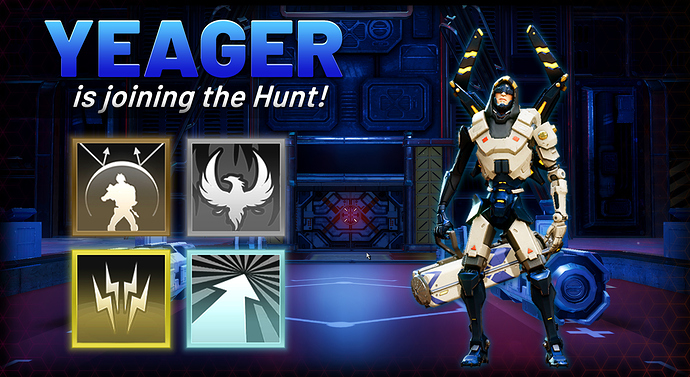 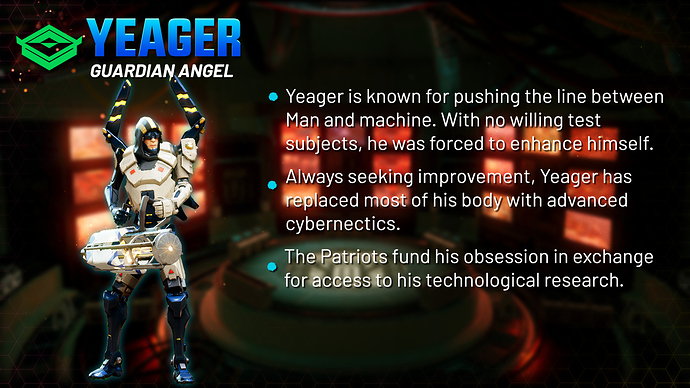 General
“Woods” Yeager, the Guardian Angel, is a cybernetically advanced warrior whose lust for power and perfection consumed him mentally and physically. A capable Mid-Line marksman, Yeagar’s personal shield and transforming gun make him a constant threat on the battlefield.

Yeager equips a powerful beam laser which replaces his primary weapon, boosting his Attack Damage for a time.

Whenever Sound Barrier is destroyed, Yeager deals damage to all enemies on the field with a chance to Stun each target

Whenever Sound Barrier is used while the Shield is already active, Yeager gains charges of Mach Ten, boosting his Weapon Damage. Mach Ten can stack to a maximum of 10 charges.

Where can I get Yeager!?

Yeager will be available from the PvP Crates & Co-op Raid! 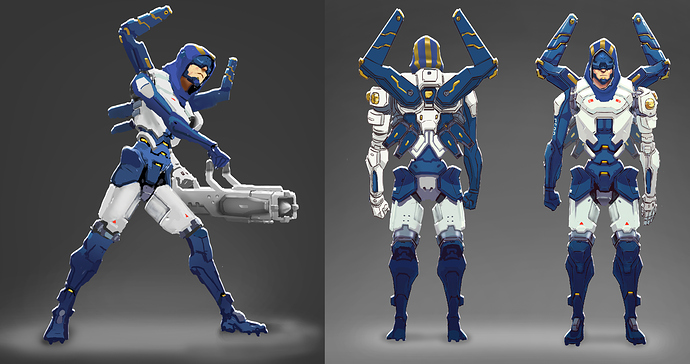 What do you think of Yeager?

Looking forward to giving him a try; cool design and a subdued but interesting kit loadout. Looks like a good addition to the game!

Change his name to Yeeter and I’ll be okay.

Guardian Angel
Doesn’t guard anyone except himself

I think he seems cool.
Being in his own little bubble, gaining speed and skill recharge rate, boosting his DPS. I think he’ll be really fun and good.

If you use Sound Barrier while the shield specifically from Sound Barrier is still active, you trigger the bonus. That specific shield.

My one complaint is that midline basically seems to only get various flavors of DPS, whereas frontline and rear line get a lot more variety. And if we want to, for instance, use a rear line DPS (Dogface, Artemis), or a frontline DPS (Steele, Savage), it means that we need to either roll with a 2 DPS team, or stick a non-midline character in at the midline. I’m excited to unlock Yeager and sonic boom some people, but if the midline could get some love in the variety department, it’d be cool to see.

Ya know, he almost kinda looks like a Forged Fantasy character

Can’t wait to trial him in pvp. Real Question is he just a cash grab

Can’t wait to see how his skills scale.

Bronze - increased movespeed means he might be a lightning speed roller! If he has low health this might prove invaluable.

Silver - the value of this skill all depends on the extent of the attack buff and how long the duration is. Looks like we have to wait for release to find out.

Gold - unavoidable damage to every enemy plus chance to stun? Sign me up! But realistically I don’t think the damage dealt by his Gold is going to be high, because designing it like that would be OP. It seems likely that Yaeger’s Gold damage is going to be in the medium or low range.

Plat - I am slightly doubtful about Yaeger’s plat skill. It is double conditional (shield has to be UP and bronze cast has to be timed while shield is UP). Furthermore, 10 charges to achieve maximum damage output might well be too long and we could see another situation like Cinder’s plat which kicks in too late when the match is already decided. His Bronze has increased cooldown reduction but still, 10 charges is ALOT of time that is needed.

Other things to look out for - it will be interesting to see Yaeger’s base damage and his health pool. He looks so skinny I reckon he’s gonna be squishy.

In terms of his base damage, unless Ronin is nerfed (this does not seem to be the case, since there are no Role Warfare balance adjustments) I see Yaeger as maybe having less value than Ronin, solely for the fact that PVP matches place high value on upfront heavy DPS within the first 30 seconds of a match. In this regard if Yaeger needs his plat charged up and cannot take out a standard Ronin Drake Flatline lineup because his DPS takes too long to hit critical poundage he may see limited use and effectiveness.

A shielder that can actually still recharge his shield gauge while having one already active?

He does not have to actually use it to activate his Plat charges but could hold it till he immediately drops his shield for an endless shield combo. Could be very annoying except he seems a better damage dealer but worse shielder than vanguard.

So we have 3 Razorbacks so far: Ronin, Yeager, and Razorback.

Oh sweet, so if we keep his shield active, every time we trigger the bronze skill will boost damage up to 10x… pretty cool, hopefully it’s possible to stack a few times with the right team comp. Anyway, nice hero! I wonder where he falls on the dps-health spectrum

34.000 DPS (8 star, platinum, level 85).
His Archangel skill adds a lot to his DPS but it’s slow to charge the skill, most matches you will not even have time to use it.

Aside from your input on his gold and his silver, I’ve heard preliminary indications are that Yeager is a poorer than average pvp hero, can anyone else confirm?

Any other preliminary thoughts on Yeager?

If you keep him alive he will show you he’s a good Energy DPS alternative. We needed Energy DPS! I mean Ronin yeayeah I know but we’re all getting sick of him.

His regular gun ain’t bad at 10 shots, 34K DPS, quick reload - and getting archangel going is bonkers - covers and enemies flying all over.
Getting a few stacks of his platinum isn’t impossible either - once he’s in his bubble he’ll charge another bronze up quite quick. And the passive occasional 90K + chance to stun everyone is awesome.