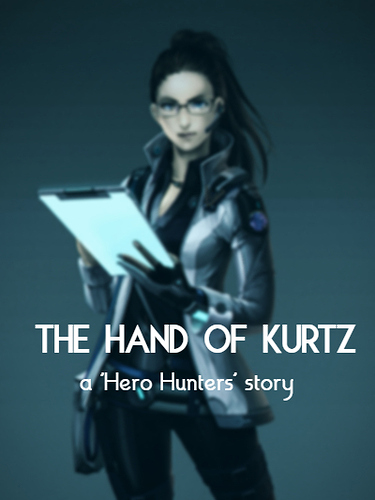 A story I wrote based on a concept hero I made about a month ago, and I also included some other heroes as well. Hopefully you guys enjoy it!

She glanced at her watch, the illuminated face shining brightly in the dark corridor she stood in.

She took a quick, nervous breath as she walked toward his office, her latest mission report in hand.

Danielle Shaw, or Shiloh as she preferred, had plenty of reasons to be anxious. The General was an overbearing, cold, and calculating man. What made this worse was that he was affable and kind-spirited when he spoke in public. It made his private, true demeanor all the more terrifying.

However, she had dealt with him before. In fact, she was a particular favorite of his. You see, being a daughter of a technician lieutenant had its perks. Opportunities to learn abounded for Shiloh growing up, and being the sprightly youngster in the compound, many physicists and technicians eagerly taught her tips and impromptu lessons. An especially strange sight, considering it was the secretive development plant of the KLG.

Fast forward 15 years, and the young prodigy had excelled beyond her predecessors. Shiloh had displayed brilliance in her work, developing some of the best tech the army ever had. She had engineered advanced gunner drones and defense shields, driving the might of the KLG forward. But she was more than ingenuity; her cunning and sense of duty to the KLG impressed the General tremendously.

In a way, she became a sort of daughter to General Kurtz. An emphasis on “sort of”.

“He trusts you, and you trust him. Relax” , Shiloh muttered to herself as she briskly walked to the elevator. The old repurposed base was massive, but she knew her way around well. The guards snapped to attention as she walked into the elevator, standing emotionless behind faceless masks. Shiloh rolled her eyes as she ascended; the honorary rank of Major was a privilege, but she thought it an unnecessary trifle.

The door opened to the lobby, her eyes glancing to the blond-haired receptionist. Her pale, sullen expression was awash with splotches of dull, greyish skin. A shiver ran over Shiloh’s shoulder. She never liked the receptionist, as the old woman seemed burdened with years of corruption and indifference.

“He’s waiting for you” , the lady spoke without a glance.

Shiloh wasted no time walking to the door to his office, being promptly escorted in by two massive shotgun troopers. The dark room was foreboding with the red light coming from the TV screens behind his desk. Those screens were the eyes over the city, and they went right in his own office. Shiloh had reservations about Kurtz’s ethics, but she never questioned him openly. No one did and went “uncorrected.”

“The mission went well, I presume?”

The voice emanated from the desk at the end of the room. Kurtz was seated with a glass of cognac and a digital data-pad on his desk, his face barely visible in the muted light.

“Exactly to plan.” Shiloh responded coolly. She then proceeded to detail the mission report.

The UAF raid on the Shoreman outpost by Sierra Docks had gone flawlessly. Despite some resistance from a garrison of soldiers led by the man known as Cast, the base was captured, and the chemical vials secured. At least secured for Kurtz by Shiloh’s sly, deceptive hand.

“Excellent. Wesson is foolhardy to trust you in his missions. You’ve proven to be quite useful to him…and to me.” Kurtz complimented.

“It’s all a part of my work, sir. The department needed those vials for progress, and we are on the edge of success in our research.” The confidence in her tone rose as she spoke.

“Your research, Shaw. You may be working in the field, but this is still your project. I have been very patient with you so far, and I’m expecting results.”

“I am focused sir, and I will not tolerate failure. The operations against the Shore has brought us results. With what we’ve done, we will succeed.” Shiloh said recomposed.

“…I certainly hope so. Because of your recent successes, I have a special assignment for you.”

Shiloh curiously stepped closer to look at the image Kurtz pulled up on his holograph. The image showed a tanned woman with long brown hair tied in a bun. She wore a blue and white armor chest-plate, with black stripes lining up and down her revealed waistline. White sensors studded her peaceful, compassionate face.

“I’ve seen this person in several recent incidents across the city. She possesses a kind of resurrection tech I’ve never seen before. It’s…quite ingenious.” Kurtz grimly remarked. “I have great use for someone like her.”

“A Patriot”, Shiloh stated. “She works closely with many rebellious factions, very active and dangerous from what I’ve learned.”

For 3 months Shiloh worked with the Patriots on an extended military offensive against the Magistrates. During that time, she grew very close to a man named Surge, and throughout their ‘relationship’ he divulged information about the other members. It’s hard to tell whether she genuinely loved him, but with her work done she ensured their relationship be a purely professional one.

“What would you like me to do sir?” Shiloh asked, engaged and sharp-minded.

“Work with her on some of her key missions. The People’s Guard has been moving against our forces in the Southern District, and she has been reported to assisting in them. Get her soft around you, and then, when you have her off-guard…bring her to me.”

Kurtz’s tone deepened and his speech slowed down. Shiloh could tell he wanted her equipment and her skills. The true connotation of this caused Shiloh’s stomach to turn.

“Of course, sir. I’ll make my services available to the Guard. I have good rep with them.”

“Excellent. I know you won’t let me down. You’re dismissed.”

Shiloh turned around and walked to the door, the image of the woman engrained in her mind. Nearly at the door, she was caught by a last word from Kurtz:

“Oh, there is one more thing, Shaw. I’ve received a few reports that you’ve been operating ‘loosely’ during your missions. I trust your loyalties are…still in the right place?” The General leaned over his desk, expressionless, yet ominously menacing.

“Without question.” She felt her lip quiver, and quickly walked through the door to hide her reaction.

What a horrendous, awful mission.

She knew who her target was, and she knew what Kurtz wanted her to do. It was exceedingly clear that Kurtz had no intention of treating this Patriot with grace. Deep down, she knew she would either eventually betray this woman, or betray Kurtz. One would bring heartache, the other, a painful demise.

For the first time in a long time, Shiloh didn’t know what to do. Her conscience was screaming against her, but she also valued the many years she had with Kurtz. At least she thought she valued them. He had given her more affirmation than she could ever ask for, and she valued it. However, times like these proved that Kurtz was slowly turning into someone she didn’t recognize, someone she truly began to hate.

Shiloh went back to her laboratory, and promptly made the calls regarding the Guard’s operations. Within a few days, she was prepped and ready to go to support the People’s Guard, all to meet the woman she saw. She knew that in the coming months, there would likely be fights against Lawgiver forces.

Sometimes her work meant going into battles against the KLG itself, which she detested. However, Kurtz always made it clear that her role was “more important than any battle of his.” A dark, cynical belief, but one which took the burden off Shiloh’s shoulders.

As she readied to board the Helios taking her to the drop location, she dwelt heavily on her conversation with Kurtz, and on his demands. As she thought, conflicting voices bounced around her mind:

“you’re a slave to Kurtz”
“he’ll always trust you”
“he’s an insane, evil man”
“he fights for good”
“the klg is the truth”
“let his cause go”

In all the noise in her head, the last voice spoke the loudest. In time, it would be the voice that would remain with her for the rest of her life.

However long her life would be, she needed to be free.

.
.
.
That’s about it! Hope you guys liked it, and if you did, please leave a comment about what you enjoyed most about it! (Congrats if you made it this far

Nice story mate. I liked it

@Spyro666
Thanks! I appreciate it!

@Nadeem
Glad you enjoyed it Nadeem, thanks for the feedback!

@Grizzly
Thanks Grizzly! Hopefully the other devs have a chance to see it, as I would really appreciate their feedback as well!

@Mxeno_skorpion
Glad to hear it kept you engaged!

Great story mate!!..keep it up

It’s always so great to see people who get inspired by the Hero Hunters world. This was a great story Vintermyst, excited to read whats next!

Thanks so much for sharing!

Nice, really good and detailed lines that potray what the main character thinks, dosent go into third person and kept me emersed, hope to see more from ya mate