VIP chat tends to be toxic from time to time. The only way ive been able to report some comments is to screenshot em and attach it to the report to support. but tend to get the same auto reply of “thanks for reporting. this is what we look for. it might take a few days to complete” and then you gotta attach the same screenshot cause now you are unsure if it went through or not.

i often see the racist comments in VIP chat. just think there could be an easier way to report the stuff and the player.

Yeah some guys are terrible, I got into a fight once with some idiot, just ranting about my whole family and what he would do to them.

After calmly telling him he should not waste the air other people deserve more he went bezerk, he asked for my phone number, and of course as polite as I am I handed him an international police number which is really expensive to call and severally punished when used for wrong reasons.

Never heard of that guy again.

May I know this police number? It’s for future research… Yeh

Some individuals just have no life and they feed on toxicity.

Easiest thing to do is to shrug them off like water off your back. And go about our own business.

They will meet their match and it will be ugly for them.

3 days ago wqw insane and I decided to stop even looking at the VIP chat. Harsh racism, sexism, homophobia, intolerance towards lots of I stand for, believe in and identify as.
The forum is better.

We had a great discussion 2 days ago about legalisation of some stuff you can smoke, and why it was banned in the USA a long time ago, so you can have an educational chat there sometimes.

I tend to see the repeated requests of city hall or whatever but then some soup in and just troll using racial slurs. Sometimes it diverts into other stuff that may seem harmless but remember there are kids who play the game. So certain subjects can be touchy

Yeah, especially the racial slurs or other discriminating taunts annoy me, a simple report next to somebodys name or profile would be ideal.

I’ve that would be added make it that you can set the time it happened so the server can collect the messages from that player in that time period, jokes aside(I can enjoy a simple troll to), but some really need to be muted for a period of time

You are my favorite unlikely mixed race

Can’t we just get a vip carry chat? 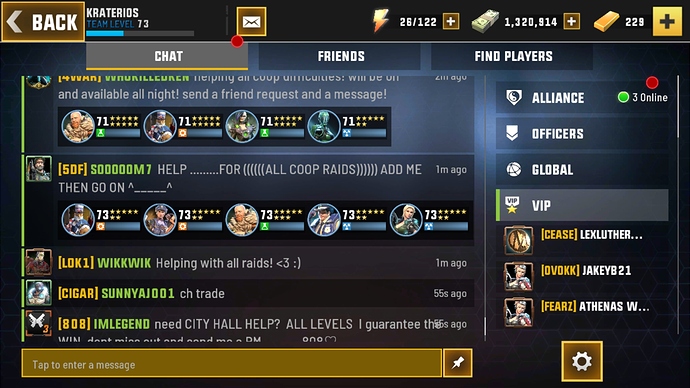 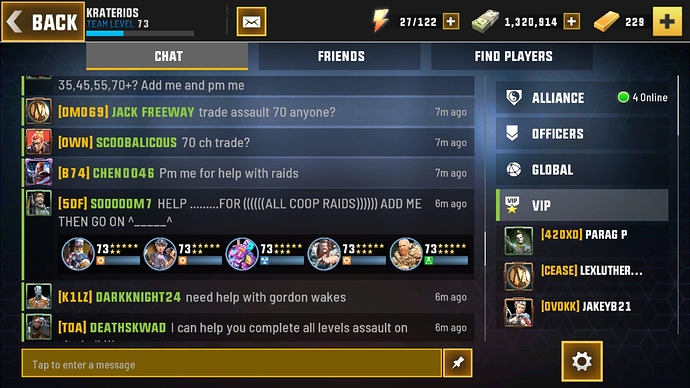 That’s actually not a bad idea. An “LFG” chat tab would be pretty helpful in keeping VIP cleaner 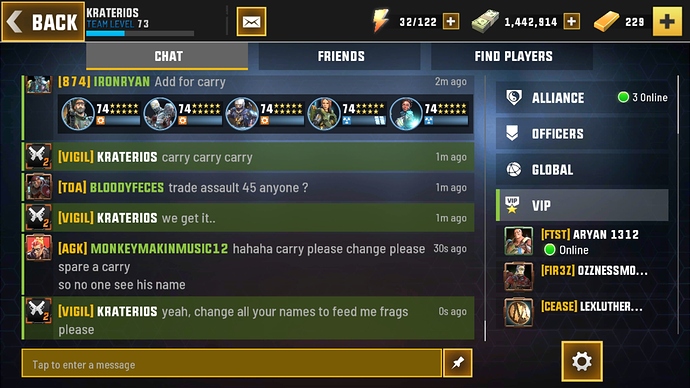 I, for once, am glad to be unable to enter VIP chat lol

But true it’s so toxic. Though some of the more prominent very active, vip noisy players also tend to be the bullies. I once saw a powerful player from a prominent guild bully a relatively new player because he thought sentry is better than prophet. And it escalated so bad almost all of the noisy pvp players started bullying him. Horrendous.

But sentry is better then prophet

I totally agree. Sentry outperforms Prophet once they are upgraded, in my opinion. Let’s bully this bully for not agreeing with us!

I know. Tell that to those “top” players. They’re members of the ranking alliances. One would think top players would be model vips. I will not name names, but that’s really a sour incident to see in the vip chat. Poor guy though. He probably quit after that keyboard bullying craziness.

At the end of the day, I do hope the devs/mods can improve the state of vip chat. Haha probably a tall order though. There’s no intervention for crappy people.

It’s sad that people troll every chat in games I’ve ever played. Life is too short to let some random parent’s basement loser ruin your day. Block them and move on.

yea, I do my best to basically “lead by example” since a lot of what I do gets noticed (plus it’s just not my style to be a troll or a jerk, even onling), and I wish more high profile/ranked people would do the same