Some suggestions to vip chat.

Today we had a really chill VIP for 30+ minutes, no drama, 1 hour later no good player was to be found, people are cursing, spamming and all the chill people I know just avoid vip at that point, this need to change.

I’d like to see some different channels to get vip cleaned and also to have a fun chat with people in-game, which is something I miss a lot lately

I posted ideas, tag on this, correct me, not this

Any suggestions would be appreciated

I know I’m not allowed to bumb up a topic, but right now this is getting buried.

We have spam making the main page while we should talk about this matter.

I don’t mind someone going against what I said, but it’s a better discussion then the last posts, please go against me to add something.

^^^^^^^
having to constantly make new recruitment messages is kinda tiresome, especially since they get buried in other random nonsense. even if the other ideas don’t get implemented, this at least should.

I’m not asking for hearts, just to get this going, I’m open to any feedback.

Let’s get some community feedback going

I wholeheartedly agree, even banning entirely would be profitable. For example, one savory individual said “I’d shoot that piece of **** in his face if he were here.”
This kind of stuff should be addressed, cause the VIP chat is getting filled up with entitled foul-mouthed brats. I really think the chat, in general, needs to be reworked. 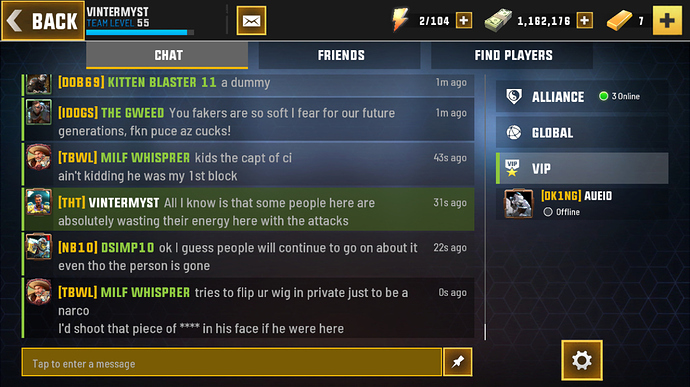 If anyone wants to post recruitments, you can post that in community discord server. The invite link is here. https://discord.gg/bAbFXsR

Remember, it’s highly necessary to read the rules before posting alliance in recruitment.

And it’s getting worse every week.

Sometimes I just start speaking Dutch with the guys I like to ignore the rest of the cursing and attacks.

The problem is that a block function doesn’t work, they still hijack the chat.

Here to support Krat. Not just because he’s a fellow alliance buddy, moreso because he’s echoing some valid concerns.

There’s quite a few amazing personalities from all walks of life and various alliances that have got used to just ignoring VIP altogether. I’m one of those. It’s become a routine to not even take a moment to glance into that chat because the mass majority of the time it’s chalk full of irrelevant nonesense and belittling of others. Or just your typical, “who’s $&! Is bigger.”

It would be certainly nice if the more experienced, friendly gamers, had an option to interact with each other in perhaps a private group chat within the game. Could really go a long ways to building more a community feel.

Anyways I’m just one. Not even sure if this thread will get any traction but I’m with Krat on this one.

I have avoided VIP chat for a long time already, and I am not missing anything.

TBH the chat system itself is pretty dire, it is so low tech and pretty easily the least developed/worst feature of the game. The alliance/friends/social implementation is also quite terrible… I’ve given feedback before but I guess it is a super low priority Suggested List of Improvements

At least they have cleaned up the Free Gold spambots, but in my opinion… that is not good enough.

We hear you! You can always report behaviour you find offensive to us, and that includes what you see in the chat.

In many cases, you can also Block a player who you’re not getting along with by tapping on their portrait in Chat and selecting the Block feature from the chat interface. There are always ways to avoid other players whose actions you don’t agree with, or players in other Alliances who might not be your biggest fans.

All the best,
Mattie
Hothead Games

Problem is blocking doesn’t help in getting a cleaner VIP, even if you don’t respond others do.

Like sing said and I also stated In my op, we need to get carry and recruitment out of VIP, I use it to for recruitment, but in 5 seconds the message is lost because of people just talking or other reasons

Just an ordinary day in VIP 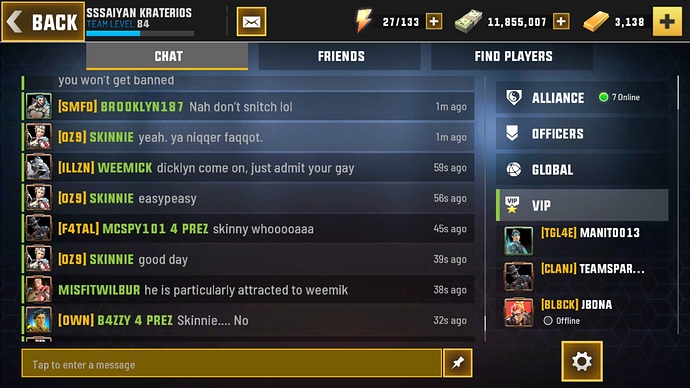 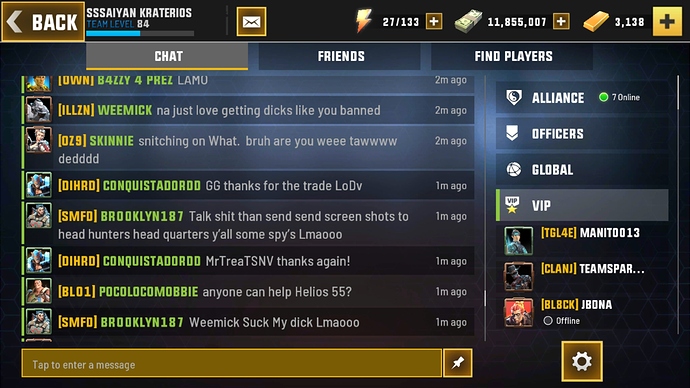 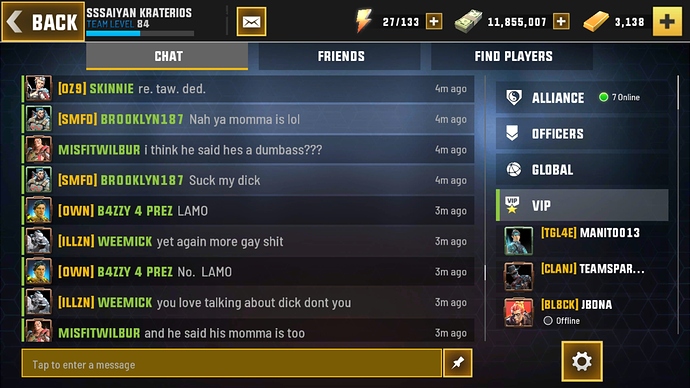 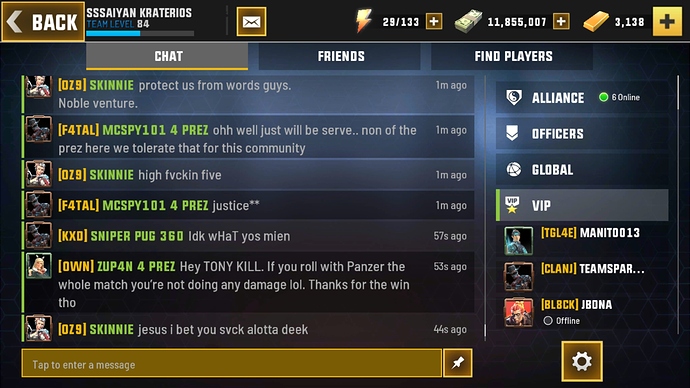 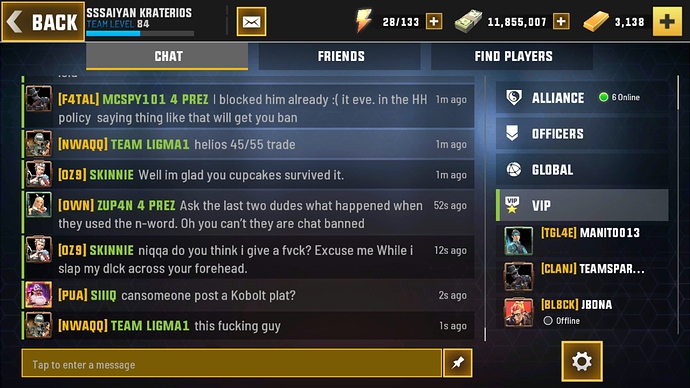 Any mmo/shooter games with pvp modes that has active community ingame ALWAYS have toxic players like these.
Even Forged Fantasy vip chat is like that. That’s the inevitable reality of pvp games.