Welcome to August! This month’s featured faction is UAF Airborne (and UAF)! For complete event details, check out the list down below. 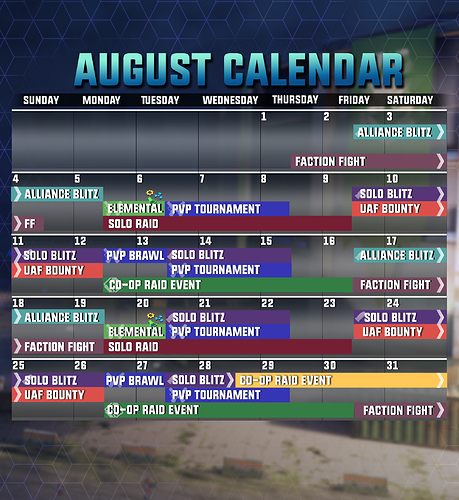 Note from Skathi: Helios Descends and Assault on City Hall are not included on this calendar, but are happening throughout the month. Check out the details down below to see the exact dates

Extended Co-op Raids (not on calendar)

Very nice Skathers! The calendars get more packed every month I love the changes and more events. So the longer PVP tourneys are here to stay then?

This is the Event Schedule, not the Update Notes

Nicely done on this format!

Love it! The many events is amazing! Something to do all the time, pick and choose your poison! Or do everything! Lol

Looks like August is a jam packed month! Everything looks pretty sweet

I’m just sad that the Min Simulation Event isn’t on yet. Gotta wait the upcoming months then.

This is just the events schedule, not update notes. Those are coming soon