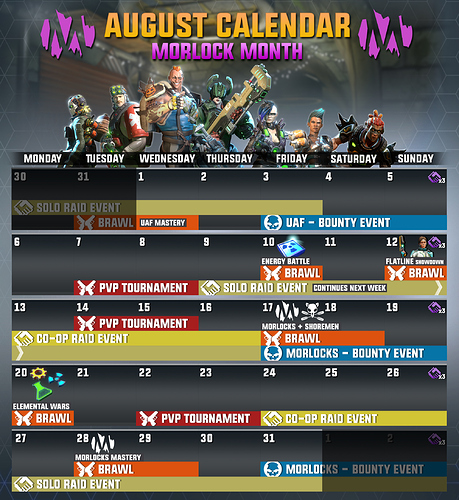 Oooooo is the next Faction Shoreman

Yeah ik but the hint of the next faction was in the last calendar as well. It was between Mags and Mors. And I see one faction Lol

I don’t quite follow, care to elaborate? I don’t remember anything hinting Morlocks in the July Calendar.

I am glad to see a Morlocks month. I have a decent team already and is looking forward to make it grow.

Do you mean the Brawl event? Because that was between Mag’s & UAFA, not Morlocks. Looking back, I don’t see any morlock references on the July calendar at all.

Anyone know about Ghoul? Is he worth investing in? He will propably be featured in a raid anyway, but I always thought his skills look quite nice.

Developer Note: Some Heroes have seen large-scale improvements for their existing roles within the team.

Ghoul is one of those “some heroes”, so it’s hard to know if he will be worth the investment after August.

I personally think he is good enough at the moment, and since the word used was “improvements”, not “changes”, he should be even better next update.

Yeah I forgot about that

He will get a major HP improvment and some more push by some rework. So since I am out of canisters to level up my existing heroes anyway, I think it is a good time to go for him in hard missions.

I always feel distressed trying to loot a character from hard mission. It. Takes. Forever. Once. You. Reach. 5*.

I have to unlock him first and the equpiment you farm at his missions is good use too (Shoulder Pads, Boots and Helmet in gold). After unlocking I have some Frags stored to give him a litte push if it is needed. And if I get to play more PvP again, I will get some more via Pvp/Heronium store.

Callidus pic was at the bottom, and Razorback Solo raid. Sorry it was June Calendar Lol

Yeah but in the August calendar there ain’t no name on the solo raid, all we know is that there’ll be a PvP between Morlocks and Shoremen, just like we in July had a PvP between UAF and Magistrates - which said nothing about the next featured month. I guess we’ll just have to play this month, have fun, expand our Morlocks team power and see at the end of August which faction will be the September focus.

I do hope it’s going to be magistrates, my uaf and Morlock aren’t the best haha

They don´t look that bad. And with Heimlock, Maven and Razor you got a damage dealer, a support and a tank on 8* plus. Combinded with the new Hero, who seems to be support/heal too you got a decent team. iI will easily melt through any PvE team.

No don’t get me wrong, but besides my razor gold 9* and heimlock plat 9*, and a decent maven 8* gold, I have nothing

A few $$ and you’ll have Ifrit, then a MONTH or Dojo or whatever and woilaa - 6* Ifrit to break the game!

Lol @Kraterios it literally says “Morlock Month” in big purple letters, above all the Morlock heroes.
I don’t think it’s gonna be the Magistrates

I think he was talking about September.