Hunters!
Alliance Wars introduces a whole new way for Alliances to compete against each other for epic rewards!

Alliance Wars pits your Alliance against 5 other Alliances to fight for control of the city. Use your heroes to capture and defend territory, on a large hexagonal map. The more territory your Alliance can hold, the more Victory Points you will earn. Coordinate with your alliance to break through enemy defenses, capture strategic choke points, or cut off an enemy’s supply-line to cripple their progress. You only need to commit a short time each day to stay competitive and help your Alliance claim Victory. 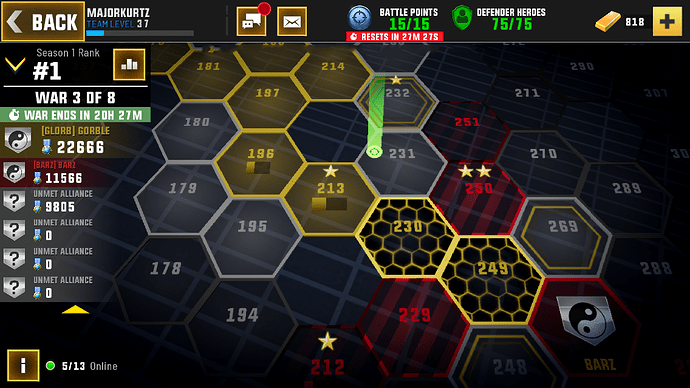 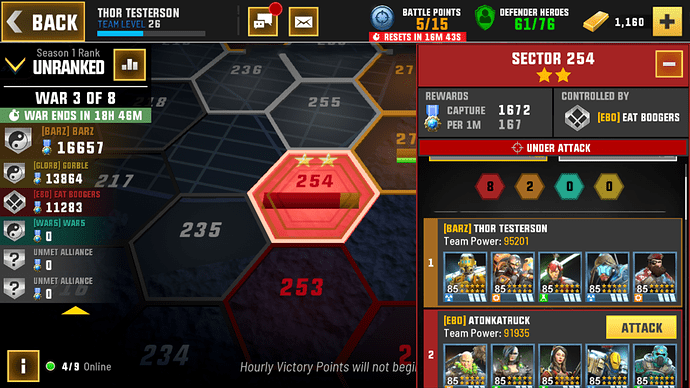 This closed BETA test will take place from Wednesday, February 20th to Tuesday, March 5th so mark your calendars! (Dates are subject to change)
Participating Alliances will be chosen at random to help us test and collect feedback about the mode. There will be no rewards for this test but your feedback is invaluable to us and will help us make Alliance Wars even better! 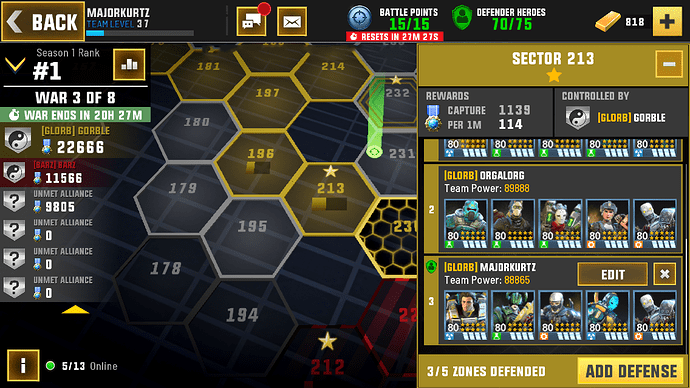 Any top alliances have room for 1 more…?

I found one guys, thanks for all the offers

Will combat be automatic? If so, does anything matter besides the teams total points?

This is probably the most exciting thing that’s happened to HH in a very long time (if not ever).

Well this may bring people back to the game

@Sogui. Currently the combat is automatic. This was an intentional decision and is something we are looking to collect a lot of feedback around. It’s something the team was divided on.

@Papa_Marsh. The team has been working on this for a while and are very happy with what they’ve created. Capturing is based on using a team of 1-5 Heroes to attack a Zone within a Sector. You must capture all Zones in a Sector to “capture” it. While a Sector is under attack the current owner will be able to defend/counter attack the Zones which are besieged. The Beta is necessary for many reasons. We’re looking forward to testing many things and getting everyone’s feedback. A note on this is that players can share what’s happening in the test. I’m kind of hoping for some videos around the new mode.

Also, the only “advantage” anyone will get is familiarity with the UI. No prizes or standing will be carried over.

Following your publication on the forum my team FCX FRENCHCONNEX and I would like to participate in the Beta of
the new event that you would like to put in place. Of course as a result of this event we would
give you our feeling about this event.

I give you my most sincere greeting
Fabaure

Hope RealClutchGamers gets picked. Keep up the good work hotheads.

Please do not PM Hothead staff or create topics/replies asking to be added. The selection process has not been announced yet.

Wow, awsome @Huginn @Muninn this was something I was waiting for a long time, thank you so much for this upcoming event!!!

May the best team win!

Just take the top5 bounty alliances and call it a day​:joy:

Can’t wait to hear the feedback on this semi serious solution. Lol.

Only the top 5 will be happy

And that is why?

The current goal is to get Alliances from multiple “power bands.” We’re interested in seeing how Wars develop at different Total Alliance Power bands. So it wont be only the top performing Alliances for those reasons.

Wow, it’s awesome @Huginn @Muninn
HHG Thanks for the Great job and time you put into this

Im excited for this addition to the game i know its been discused somewhat in the past…but to see how you guys developed it makes me happy for new content! Keep the new content coming…

Also hoping my idea for new content makes it in the game soon that would be awesome and also keep the game dutting edge…new weapons for heros like you guys have introduced new skins and just use the same system for new weapons i.e. common rare legendary