What seemed like an eternity was really just a couple days but I was getting the itch so I’m glad my fix is coming soon.

We just got the message that the next war kicks off tomorrow.

Based off the message, we’re definitely getting 20 points this go around. That should definitely help a bit with strategy and such. Best of all is open Beta will be next month so you all get to participate!

There’s not much for us to see right now. The leaderboard from last go around is visible and we’re still in 5th.

And the war is back in the alliance tab but there’s not much we can do with it other than watch the countdown and check the leaderboards.

What’s new is that we can see what members are allowed to participate in the war. Well, we are supposed to be able to see. When I tap the button, nothing happens.

One thing that hasn’t changed? That annoying patrol crate red dot that makes you think you have something going on in the members button but it just the frame scrolled to the right and the patrol crate dot being pushed into the button. Me love you long time if you fix that devs.

Finally, something I noticed is that it says roster is locked and match makingnis in progress. Makes me think we won’t be paired up with the same alliances we battled last round. Who knows. We’ll find out in 16 hours.

Til then, feel free to post questions, suggestions, comments, etc.

What I am really hoping for are manual, player-controlled matches when attacking.

I feel like the instantaneous, auto-outcome, chance-based matches take away from the whole experience and make it quite dull…

Additionally I feel like Battlepoints could be utilized better if we were able to control the heroes we choose to use in our attacks, since we could actually come up with a battle strategy to use, rather than leaving it to probability.

What I am really hoping for are manual, player-controlled matches when attacking.

Based on the after-war survey questions, I believe they may be thinking about this.

This would be nice!

Day 1 was much crazier and faster paced than the first day of the last war. Seems everyone’s got a hang the game and made a dash for the middle of the board. Smart little buggers.

We’re doing alright so far. Still 5th overall in the season and right now sitting at 3rd but that can soon change either way. 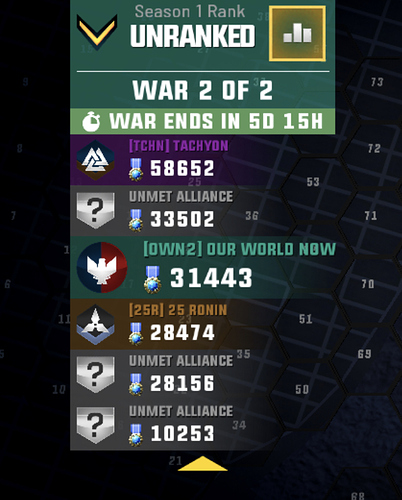 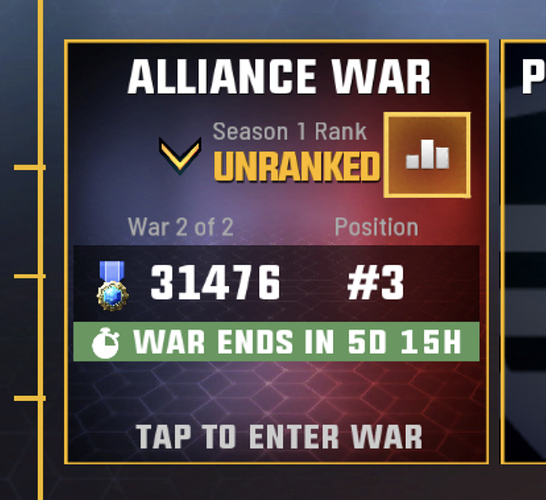 Like I mentioned above, rather than taking tile by tile, it seemed we ran right for the sweet spot of the map to get the most points.

We quickly ran into two other alliances that had the same idea. This time around, no discussions on teaming up yet so we’re fighting on both fronts.

Couple of things about this.

With that said, I’m glad we got a new war going. I was missing it. No new items that I discovered so sorry to disappoint there.

Got some ideas from fellow members and myself that would be nice to see (different from what I’ve mentioned in the other thread).

I’m gonna call it a night. Would love to hear from some of the others playing as to what they think. Also, if anyone who isn’t playing has questions, let me know!

Sorry for the late post on this one folks! I’m sure you were all at the edge of your seats waiting.

Big developments happened on Day 2. We moved up a spot but TCHN still has a very comfortable lead on the whole board. 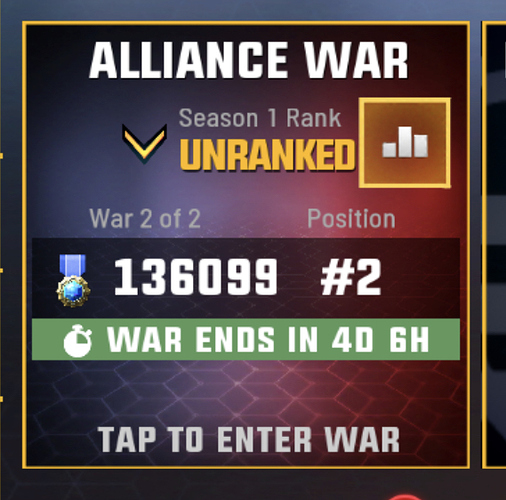 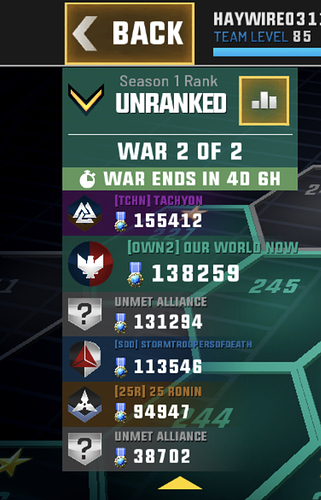 It really looks like everyone’s strategy from the get go was to get to the center and hold it. TCHN got there first so I’m guessing that is why they have such a huge lead. With that said, I’m wondering if that is always the best strategy.

We ended up going in from the side and attacking their HQ area which cut off their supply line for a while until they broke the line again.

You can see that when you cut the supply line, the tiles cut off can’t reinforce themselves which leaves them vulnerable to attack. This is why I’m a bit concerned that the rush to the middle strategy could end up backfiring.

As far as our other opponents on the map, I know we have a sister alliance on the same map. This is a concern I have moving forward just because it means you automatically have a partner in the war. I’d rather you have to communicate and develop treaties amongst alliances rather than just have it handed to you but I don’t know if it’s possible to avoid allowing this to happen.

As far as the other alliances, seems they just wanna knock down TCHN a bit to avoid them running away with the lead. Everyone looks to be attacking the middle of the map to get those points back from them.

But you’ll notice in the alliance screen shot at the beginning of this post, it still says unranked. Not sure why that is happening.

Other than that, don’t have any ideas that I or others haven’t already mentioned. I’ll keep you all posted on how this next day progresses!

EDIT: I remembered one thing I wanted to mention. One of the post-war one surveys asked something about the system being fair and allowing for less powerful alliances to have a shot (at least I think it did). While the lowered powered alliances have a shot on their individual maps, there’s no way they will compete on the overall leaderboard. The top alliances have very powerful players that can take tiles with just two heroes. The lower powered alliances have players that may need all 5. So there’s going to be a huge disparity in scores between the big guys and everyone else. I don’t know if this matters or not. Hopefully there will be map based awards and not just overall leaderboard awards.

Thanks for the great Work Haywire!

A bit late with this post as day 4 is about to kick off but wanted to keep you all updated as to how the war is progressing.

We’ve taken the lead into first place but only by a little. Whenever you’re at the head of the board, you have a target on your back so I’m sure things will change in the coming days. 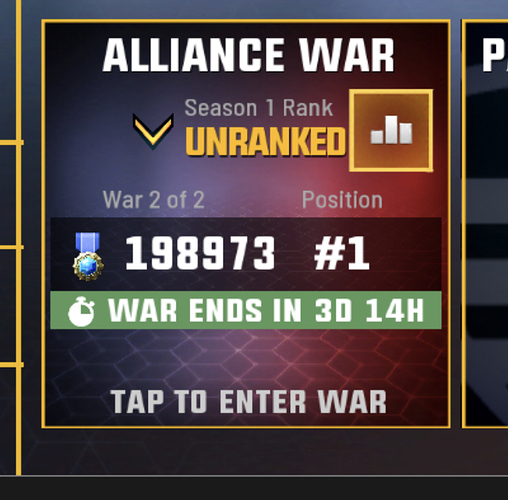 We’ve moved up to 4th overall and have a little bit of a lead over 5th place but like I said, things can change.

With that said, we’ve been closing in on TCHN but they’ve been putting up a good fight. We’ve been going back and forth cutting off each other’s supply chains which stops the opponent for assisting tiles under attack.

We’ve also got 25R taking some shots to our right flank so fighting on two fronts at the moment.

A couple of suggestions for the devs to consider: 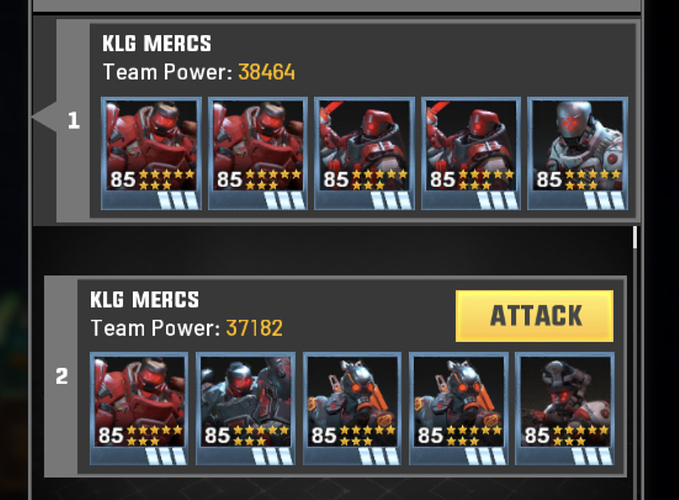 That’s it for now. I’ll update you all tonight.

Whenever you ready. Please say that the best way and strategy to block others is to team up with everyone in there. In the same map there is OWN2 and OWNED. plus you have teamed up with SOD. Basically stop putting lies and say it exactly how come you are there. And don’t take it as good or bad. But actually teach others how you can cut alliances by teaming up as that way obviously they can only do 1/3 of it. 3vs1 mate. Teach that in here how it gets done. And stop making your self you are first as you fought hard and deserve it.

I think cutting supply lines should mean more. Maybe stop hourly point production at least. If you have high enough heroes having your supply line cut to a high point sector doesn’t truly affect you.

Well, the second war is coming to a close and most of the fighting has settled down.

We’ve been lucky to maintain our overall lead to stay in 4th but due to several issues which I’ll discuss in a bit, we’ve dropped to 3rd on the map. 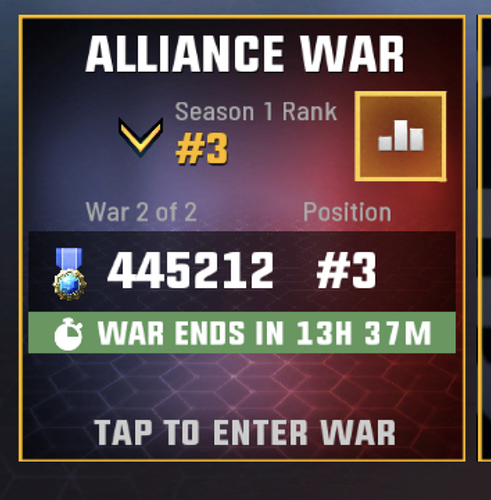 The map ended up shaping differently than what it looked like after day 3.

So a few thoughts in regards to the overall war:

I’m sure there’s some other ideas I missed but that pretty much sums it up. Look forward to hearing how others thought it all played out and what can be fixed or added. Thanks again to HHG for allowing us to participate. Can’t wait for open Beta

2 Questions: 1. If I see that correctly, does it matter who has 1 place at the end of the 3 wars? (in theory, therefore, an alliance that has always made the 2 and there are different 1 places to win at the end?) 2nd and the more important question, what will there be for rewards? (Here’s a little bit of thinking, considering the Bounty, 4 days, what will be the reward for Alliance War, which is much longer?)