It's time to Nerf Mandrake

His team Invisibility should only be effective for 1 hero at a time.

His self invisibility needs a timer on it, been able to hide under invisibility for the entire match is just poor design.

Even when you’re 5-1 up, you can simply hide under cloak and run around, then the match ends in a tie…

This isn’t right, it needs fixing.

A lot of people have invested a lot of time upgrading Mandrake for that team invis ability. If anything should be nerfed, just put a timer on his self invisibility. Devs are better off creating a hero that counters Mandrake, like someone who has a skill that allows all allies to clearly see invisible opponents

Cant you just shot him manually, even if he goes invisible?

He doesn’t need a nerf, if he was nerfed he would be an utterly useless hero.
He is easy to kill right off the bat, just target him early with an Energy hero.

He doesn’t have that much health and armor, nerfing him would be the end of Mandrake, just learn how to shoot invisible enemy’s!

The only problem I see is that he can be permanently invisible if controlled by a player with his silver skill , maybe add a timer to his invisibility skill or after certain amount of damage is dealt to him his invisibility wear off just to avoid the hide and run strategy that make matches end on tie even if you have 5 heroes left and he has only mandrake , other option is to change the PvP win system if the timer ends the player that has more heroes alive win and a tie would only happen if both player has the same amount of heroes alive

Ding ding ding. Invis heroes still take damage when shot. People need to stop leaving auto play on then QQ when they encounter mandrake. Getting sick of the crying

The other heroes are not the problem when invisible maybe a little annoying because the auto aim system disturb your aim when they become invisible ,the problem is his skill gives him 100% movement speed and no way to remove his invisibility , if the player is any good he will stay invisible and won’t stop moving when his other heroes are dead till the match end on a tie because his mandrake was not killed because ai won’t aim him and because of the movement buff make him really hard to target and kill unless you have heckler or prophet in your team to stun / nuke him when he is about to move from cover

Ok, i say it like that ”Learn to Play”… Sorry but realy! I play now like 12 month against Mandrake and all you hafe to doo is focus him or shot the invisibel heros… Everytime i face Mandrake i go on Manual and shot him down! Why nerf an Hero only because some players cant handle a skill after 2month…

It seems this topic has upset a few people

For starters I never play PvP on auto, I honestly think it should be removed from PVP completely (auto)

Of course I know you can target invisible heroes, this is not a valid argument.

The facts stay the same, he negates all your AI completely useless and anyone with half a clue can abuse his silver invisibility and keep switching from cover to cover.

I’m not saying Nerf him till he’s useless, simple tweaks would be enough, even if his silver movement speed was removed and that he could only cloak 2 heroes at a time, this would make him much more balanced.

We would see much more dynamic builds if this dude wasn’t so overpowered. 8)

Sure you can shoot hin manually. But if someone runs from left to right invissible with doubled speed, you cant really hit him. Put him together with 4 healers, he cant be killed. You cant attack him with skills and the rest of the team wont attack the healers, because they get invissible.

Sure you can try and kill him, to evade his silver skill. But some start to run around at the beginnig, just to save him. If your unlucky and none of your other heros attack him, there is no chance to get him down.

A timer at the silver Skill or maybe it stops after he got XX Dmg instead of doing XX Dmg would do it.

If he starts moving around take down his healers, people Mandrake is easy enough to kill… Learn how thoot silhouettes

I’ve stated this on other cries for his nerf, but his invisibility can be his crutch as well. As you stated, AI don’t focus the heros who are invisible. If you are able to burst down one of his heros at the start of a match to the threshold that makes them invisible, you essentially are narrowing down the targets your own AI focus on.

I’ve used the example before, I use my dogface to quickly take out energy heros such as gammond or butter that are common in pvp, I know I can kill them with just one reload from my dogface and can sometimes hit mandrakes gold mark on them in one clip. This immediately turns the fight into a 4v5 in my favor as I know I’ll be able to kill the hero I was focusing on, and now it narrows the targets my AI focus on. Furthmore, my AI May have taken another hero to invisibility, furthering the focus down to 3 heros they chose from.
It’s the same process most matches, take out the main energy heros with my dogface. Once they are dead, I scan to see if another hero is invisible, then switch over to a type that counters it. Pretty simple but effective process.

The problem that most people have, and why they lose against him, is they tend to focus there initial fire onto mandrake to eliminate his gold from occurring. Most teams, he is not the most dangerous hero to deal with and it allows free roam for some of the more effective heros to do the damage they need to kill your team. I can’t count the number of games I’ve won and only lost a heart on mandrake for that some reason, they spend the entire match trying to kill him and end up losing.

I agree with you the other heroes are easy to kill when invisible , his gold skill is not the problem just annoying to face but his silver skill can be abused , did what I been talking about to record it so it is easier to explain

The problem is a combination of his silver skill with no limit and how PvP matches count as tie in the end of the timer even if the other guy has 5 heroes alive and you only have 1, on that video that guy should have won.

Some fix could be:
*The player at the end of the match that has more heroes alive win, a tie will only occur if both player have the same amount of heroes.

Just trying to give feedback, But I do agree the Gold skill is not the problem as it can be easily killed unless he is moving back and forth but without the movement speed is ok just a bit annoying

If a player is running from left to right over and over again while invis, then that is basically a 4 vs 5, right? You would have the upper hand, since that hero is dealing no damage, but instead just running. So focus another hero down (that the opponent is not in control of) and kill them, while he’s using his time to run.

you can sit there trying to aim at the invisible hero while they run back and forth (also wasting time) and their AI shoots you down. It sounds like that’s what you try and do, which might be the reason you’re upset about it. Choose a different strategy maybe?

If a player is running from left to right over and over again while invis, then that is basically a 4 vs 5, right?

To be fair, it doesn’t work like that. Your team won’t shoot invisible heroes, so, once an enemy drops under 30%hp, he will be ignored until he gets back to 30%. This means that, if your team can’t do the last 30% in one attack, they will change target. But enemies can still shot while invisible, so instead of a 4vs5, it can turn into a 4vs1 (since you could be the only one shooting in your team at a given time). And Mandrake apparently (didn’t know) can still use his bronze skill while cloaked, so he can still be somewhat useful by stunning enemies.

Mandrake isn’t very good himself and his healing isn’t that good from his gold so letting Mandrake go invisible, hide and run back and forth is fine. He’ll only stay invisible if the player is controlling mandrake if not he’ll go into it and come out of it in a timely fashion. IMO the only change Mandrake actually needs is if he’s the last one left let the opposing team target him, not because it’s hard to kill him when the opponent is trolling, but because it’s sheer trolling and games shouldn’t really promote such practices. The only time it’s actually annoying is when their is lag issues causing hit detection problems so it really is about just cutting down on the unnecessary trolling. Additionally invisible heroes should be able to be targeted by the player controlled character if the player is manually aiming close to the invisible character. Bottom line though is Mandrake isn’t even good he’s just exploitative of an honestly already questionable AI.

I see a lot of comments here.

One shot kill? So if I use a minigun with 80 bullets I just pray the map and win?

Most people I see complaining here probably have 1-4 gold hero’s and Mandrake isn’t one of them. If you’ll learn how to kill off invisible units you can manage to win 5 to 1, even if the enemy manges to only keep his Mandrake alive it means that you get 80 PvP shards and he lost everything but his Mandrake.

There are plenty of ways how to destroy Mandrake, yes I use him to, but I have enough setups that wreck him, he can’t heal him self, so destroying the rest of his team is enough to finish of the fight. If you can’t kill him, look at your team composition and maybe think about having a decent energy hero on your team.

Sometimes I lose to when I thought I should have won, yes this sucks but shit happens, at the same time I won when I was close to losing, should this be the reason to nerf Mandrake? No!

Play around with team compositions and you’ll learn there are plenty of hero’s to play with, also very good teams not using Mandrake and killing everyone…

I think this tie solution is a great fix, fair and doesn’t require the Nerf to drake.

Still have the problem of 1v1 but it’s a great start. 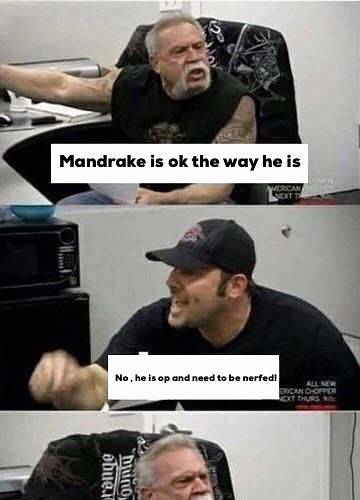 (Disclaimer: the image above is a meme and is not meant to offend anyone and should not be taken serious)