Hello, can somebody recommend a team for Mission 8-10, because I been stuck there for a while. I cant beat the third wave because if i concentrate on Heckler, he gets healed by the Healers and if I concentrate on the Healers, Heckler takes out my whole team. I use 6 Razorback Gold 3, 6Gammond Gold 2, 5* Dogface Gold 3, 5* Heckler Gold 3 and 6* Moss Gold all Level and Skills on 63.

Well, I had a bit of trouble with this one.

Try to focus Heckler and use your skills to interrupt the Operators the moment they cast the heal (not while casting, just as soon as they cast. That way the skill will be go into cooldown, and enemy Heckler will be barely healed)

But you may be weak for this map. I don’t exactly remember, but I think I had a full 6* team with Matador 7* and still took me a few tries.

Ok thanks. Guess I will wait till my Heroes are stronger. But I have another Question an was wondering if you could help, what would you do against a Team like this 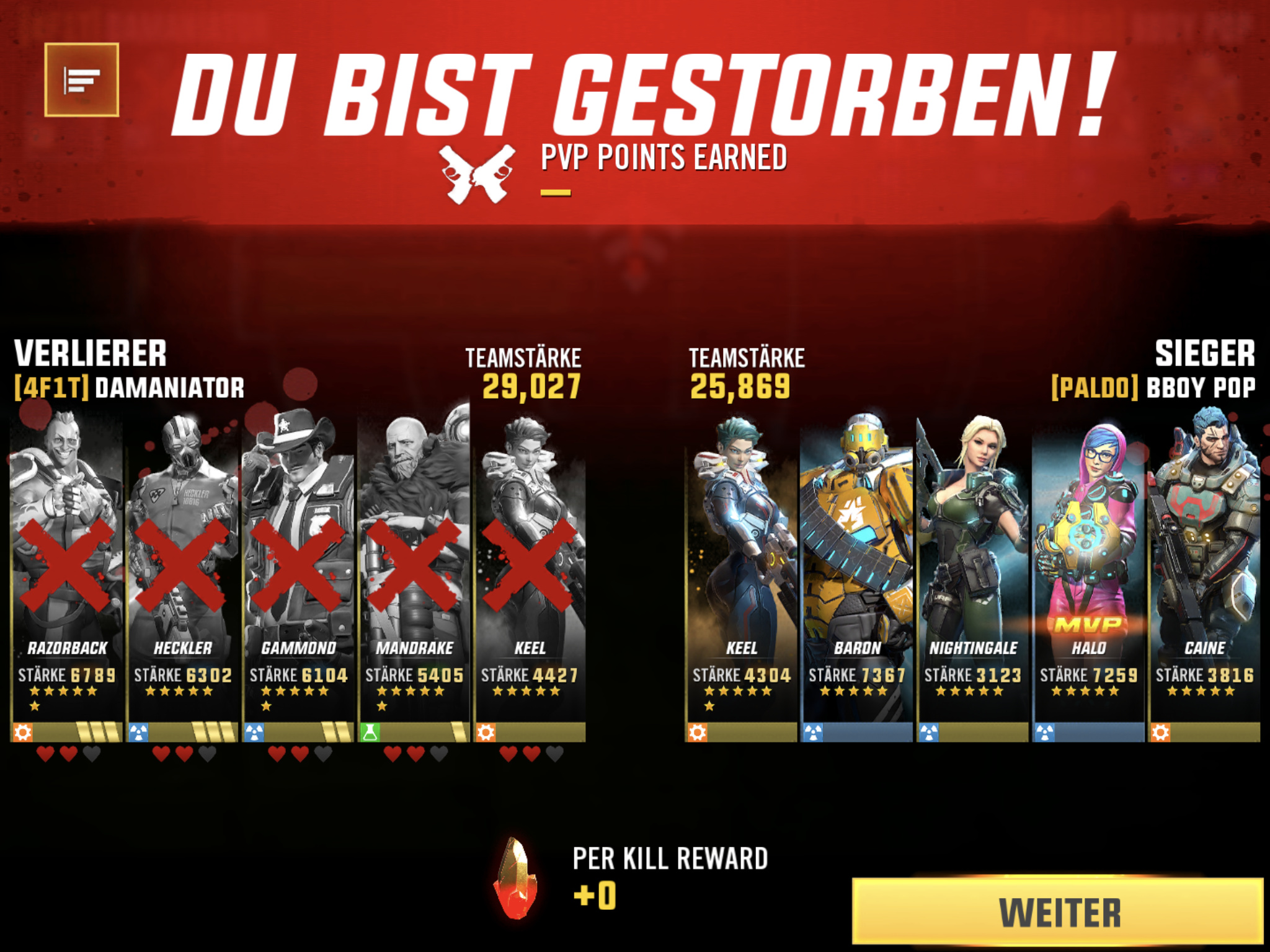 A good dogface would be the key to both.

For the mission, kill operator first and then concentrate your fire on Heckler (may take a Prophet/Nightingale with you to mark him.
In pvp just focus fire on Haloo, if shes down to 50% Baron will provoke, your heros will focus on him, and willl bring him down in no time. Works without dogface, too. Play your damage dealer and bring down a weak element type as fast as you can. If Baron is down, he has no other hero to really make use of Halos Platin.

Is this your main team? Because Keel isnt realy fitting in there. You dont have a hero making good use of her Gold

Thanks for the advice. And yes, this is my main team, ususlly it wirks pretty solid for me, but if you have any improvements i would be thankful for letting me know a good team.

I dont like Heckler in PvP, may change him with Dogface and Keel with Moss.

But if you are good with this, keep it. Everybody plays differently, so there is no best team.

Damn, you against platinum heroes? But how?

The other guy is sandbagging (two high-power plats with relatively low power golds) which is why your overall power is 3k higher than him: he’s being penalized for the power gap between his heroes. The fact that you are still losing speaks more to team comps, both yours and his.

First, his comp is stellar. Platinum Baron with Plat Halo is a well-known PvP beast. But he’s also got Keel to keep healing up as Baron knocks barriers down (which he’s great at), Nightingale for quick solo heals and the occasional stun-lock, and Caine for his really effective shielding. This is a tough match-up for anyone at this power level.

As for your comp, as much as I want to love Heckler, he’s not that great in PvP. His DPS is steady but not overwhelming so it can take a while to take out an opponent with him. And his stagger doesn’t trigger often enough for it to be a serious threat. And as somebody already noted, Keel isn’t really helping this team. Her gold is what makes her shine so you need to surround her with barrier busters to keep spamming health. Tanks are the best for this but your two are Razor and Gammond who don’t knock down them down nearly as well as somebody like Matador, Yang-long, Baron or even Butters (who I personally think is pretty lousy but can be a nuisance in the right circumstances).

In this particular situation, Baron is the linchpin holding your opponent’s team together. He’s the key that is making both Halo and Keel viable. If you take him out quick, he’s not going to be able to deal good damage and won’t be healing at nearly as high a clip. IMO, the best counter to this set-up is Dogface so you should really focus hard on getting him powered up. He’s hands down the best burst-DPS in the game and is pretty much top-tier for any team composition. Here, he’d gain an elemental advantage over Baron so if you focus him down immediately and can land head-shots, you can take Baron out before he can deal too much damage to your heroes and before Nightingale can heal or Caine can shield him. If they get their specials up and cast them on Baron even once, you are very likely toast.

Thank you for the explanation and the advices. Can you recommend a good Pvp Team for me?

My Gold Heroes are Razor,Gammond,Heckler,Maven,Dog,Mandrake,Butters,Keel,Hideo and Moss.

Oh and the reason I use Heckler is to take out the enemys Mandrake as quickly as possible, so who should I instead?

I think what you’ll find, especially at higher levels, is that you can’t take down Mandrake first all the time and win reliably. Often you’ll spend too much time trying to bag him while the other guy’s DPS is shredding your team. In certain situations it’s OK but if you have the ability to burst down his most dangerous threat first, and leave Mandrake for second (or even later), you probably will have a better chance at winning. That requires you to A) have a high burst DPS hero on your team and B) control him from the start so that even after your target goes invisible, you can follow him and finish the job (since your AI teammates will now ignore him, it’s up to you and your thumbskill to get the job done).

For an all-gold team, try Razor, Gammond, Mandrake, Dogface, and Moss. Razor and Gammond in the first two slots so that it pushes Mandrake to the second line where he’s a little safer. Moss and Gammond are a powerful healing combo. Razor provides taunt and shielding. Both Gammond and Razor also do good damage which is a big plus. Dog is your heavy damage dealer though. This set-up also gives you a 2-2-1 elemental configuration so you aren’t too reliant on a specific advantage.

In your example above, control Dog and start hammering away at Baron right from the start. When he goes invisible, make sure you stay on him and finish him off before switching targets. I would personally either go after Nightingale (eliminate those solo heals and take her quick with the elemental advantage) or Caine next (because those shields are a real headache) before thinking about Mandrake.

I tried it out, but unfortunately it didnt worked really good for me.