Hello hunters! Allow me to introduce you to my newest creation; 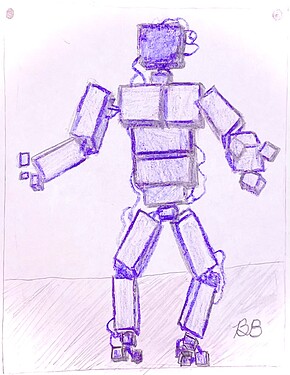 Please keep in mind; this is not an actual hero being added to the game, but rather a concept that I, a fan of the game, have made for fun and for love of the game!

Abyss, as many refer to it as, is a ‘AI’. It is not alive but is sentient in multiple ways. He is from space, most likely extra terrestrials, but it was recently revealed that it might be a failed experiment from long ago, real eases into orbit as a “fail safe”.

Abyss is a form of energy, and matter, but is also matter less. It looks for the highest form of energy it sees as possible, and uses a special skill to replicate it for a one time trick to turn into nothing but the pure version of this energy,

During one of kreiger’s final expeditions, it latched into the hull of his ship and rode back,

After landing on the destroyed earth, it found the element Void, and it saw this is the perfect fit, it used its unique ability to change mass to become what it is today. A pure living Fragment of Hell. However no one knows his goal. He is referred to as a “He” and as a expert soldier, he is mostly rogue, but understands everyone. He speaks in strange sounds and pitches with electronic sounds added in. He might even take a bounty but for parts rather than cash. Is he building something? Who is this mysterious hero?

Obliterate
This hero charges himself for 5 seconds. During this time he gains a 25% faster fire-rate. Additionally all damage this hero does, deals no damage, but when the effect on Abyss ends, the affected enemies lose max health equal to the damage that would have been dealt by him.

Duration increases by 0.5 seconds every 10 levels

Fire-rate increases by 5 every 20 levels

Abyssal Charge
For 2 seconds, this hero charges up using his energy to absorb all incoming damage to him and his Allies and reducing all damage by 40%. This hero is neutralized while this ability is active. When the effect ends this hero deals damage in equal amounts to all enemies equal 20% of the absorbed damage . This damages all enemies who damaged him or his Allies during this.

Duration can be extended by 1 second every 20 levels.

Pure Essence
This hero is made up of nothing but absolutely pure Void Heronium and a conscience. He also possesses a unique ability to gain extra energy. Every 5 seconds of the match this hero gain one “stack” of Pure Essence and whenever Abyssal Charge is used, he depletes all charges and increases the damage against absorbed and used against enemies during Abyssal Charge by 5%

Uncontrolled Experiment
This hero gains [Armor] and [Void Dps] every time he loses a stack of Pure Essence.

Additionally This hero helps his Allies as they recover [Health] and receive [Armor] for every second Abyssal Charge is active.

This hero in immune to damage during Abyssal Charge

Weapon: the cubes around his hand rotate while idle, they reset the animation and launch back every shot,

Reload: he combines his 6 cubes and rotates them all around in a ring for 1 cycle before returning to his hand to complete the reload

More than 100%: Because of this hero’s gold ability, he can make his silver deal more than 100% damage in total return. If this happens when he has enough charges, pray for mercy because nothing different will happen. just 140% as a possible max amount.

Just for anyone confused to the “purple lightning”, it’s just some good old void energy!

all damage this hero does, deals no damage, but when the effect on Abyss ends, they lose max health equal to the damage that would have been dealt by him.

so, during the skill activation, he does no damage?

Thanks for pointing that out! Yes instead of dealing damage, he reduces the max health rather than go for the hero’s current health. I will revise it to indicate his enemy loses max hp, not him!