• Roman “Scrap” Brown was born on a stormy, desolated planet called Lotho Minor. The planet is simply a junkyard. The whole surface is covered with enormous mountains of trash.
• Even though he grew up in a rough environment, Scrap used this mysterious planet to his advantage. Everyday, he would go out looking for parts that he could use to build with.
• After years of teaching himself how to build machines and robots, he made himself a mechanical claw that is attached to his back. He calls it “Gizmo.”

Scrap, the “Scavenger,” is only a boy who follows his dreams. He’s a midline fighter. He can shoot lasers, knock enemies to their feet, start with healing, and even boost his damage!

Gizmo emits a powerful laser beam that deals damage per second and disorients the enemy for 5 seconds.

Scrap can still fire his weapon, but cannot use his silver ability during the duration.

Scrap discharges a shockwave that deals damage and knocks the enemy on their feet, stunning them for 5 seconds.

All allied heroes start the mission with bonus health and improves all healing received by 30% for 20 seconds.

Scrap’s abilities have an additional 36% ability strength and a 20% chance to resist any skills being used on him if he is under half health.

The difference between a good DPS Hero and a great DPS Hero lies in the amount of damage they can dish out. Scrap receives a bonus to her Elemental Attack Damage, as well as a 30% skill charge bonus to her Bronze Skill. 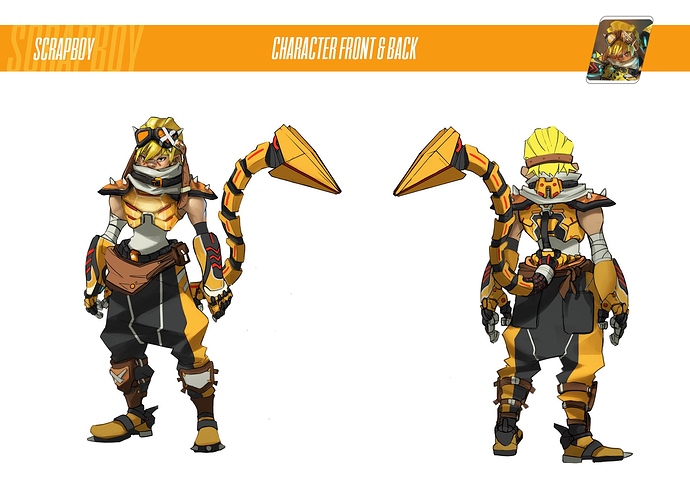 Let me know what you think about this new style I tried, not sure which I like better. It’s a bit different than my normal concept looks, I based this off of the hero spotlights that the devs make.

This has great structure to it, nicely done!