I just ran five different missions with Serial on autoplay, Heronium Skin if that matters, and not a single bullet from his silver did damage to an enemy or cover in the 15 or so times it activated.

And after reading your cover comment about them not being behind cover, I destroyed cover with him then activated the skill - and the only person he could hit while autoplayed was the one behind destroyed cover - hopefully even you can agree that you should be able to hit those behind half-cover like sandbags without having to destroy the cover first

Could not agree more. Take control of him and shoot them in the face.

And if you’re in a scenario where you lose if you do? Do you deserve to be punished by losing a silver ability for using a different character?

Are you saying you don’t want to take control of Serial because you need to control another character? I thought you were playing on auto?

Regardless, I’m not sure what you mean by “losing a silver ability”. EVERY hero in the game, when controlled by the AI, shoots slower and less accurately, and will shoot cover when the target is crouched. Serial is especially affected by this and it stands right out like a sore thumb because his Silver skill is most useful when the target is actually hit by his bullets.

But he is not the only hero who’s most effective damage chance is thwarted by AI. Shivs will shoot the heck out of cover on auto. Panzer, Kaishi, Heckler, …actually not sure why I’m making a list…bottom line is AI will shoot cover, miss, etc.

As far as scenarios where you lose because you take control of Serial vs. some other hero…I can’t think of many. If i’m using Serial and Sapphyr on the same team and I face a Serial on the other side, I would probably use Sapphyr to kill that Serial and then likely switch to Serial because he’s tankier than Sapphyr and his Silver skill does a bucket load of damage when it hits and I want to make sure it hits.

AAAAAAAny way, nuff said. Not getting on this soap box again but I will say this one last thing: A hero performing poorly on auto does not a broken hero make. 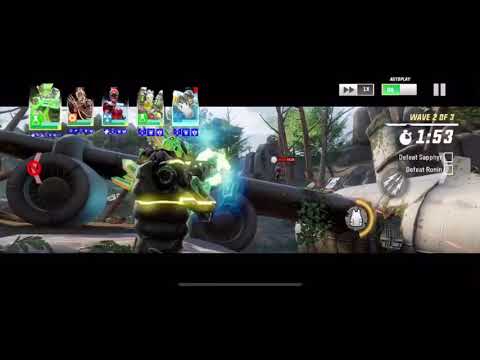 Here is a quick video I uploaded to YouTube regarding the bug that OP is referring to. It’s not because he’s on auto that he’s missing, quite often it appears that his bullets just disappear.

OK, now THAT I can see and have to agree that looked a bit strange. The enemy on the wing was standing and should have been wasted even by an auto-fire serial. I would use this video and report it.

I should’ve sent in a ticket a while ago about it, I just figured it would’ve gotten fixed on its own. I’ll send it in today, thank you!

This is exactly what I was talking about…

Yea I can’t remember a time where this bug didn’t exist, and I know of others too that experience it. I sent in a support ticket so hopefully they can look into this and find the issue

Yeah, I’ve sent a sp ticket too, but they said my best solution now is to play him manually, they said AI can’t always be accurate

I submitted the YouTube link since I couldn’t submit the actual video but hopefully they can see that it’s not an accuracy issue, it’s an issue of his bullets disappearing. Manual is always the way to go but we can’t play manually 100% of the time, especially when switching to different hero’s. This happens a large majority of times and I know I see it every day when I run him in gauntlet

I don’t know if it’s a bug, but when I have a PVP match on auto, Serial’s misses every shot. Like how can he miss 61 times. I think HH wants you to either play manually or lose the round so you can spend gold to reset the lives

There have been times where I’ve seen him shoot a couple feet above enemies, but I think that’s also part of this bug. I can try to get a video on that as well but that’s harder to capture since it doesn’t happen as often, at least for me. I don’t think they are doing it on purpose, they just need to be pointed in the right direction on where to look and see what’s going on. The more support tickets sent in (with proof) the more likely it is to be looked into and fixed