Hello, the ranking pvp was not bad until the last, since tonight I find it a pity that the rank 100 have disappeared, regularly in the top 100, I had 175 frag hero, currently 64 th top 25% I enjoy 125 frag multiplying by 2 heroes I lose 100 frag, I find it a shame, I’m not the criticism, I really appreciate the last change and the new rank war, pvp but a pity that the top 100 have disappeared 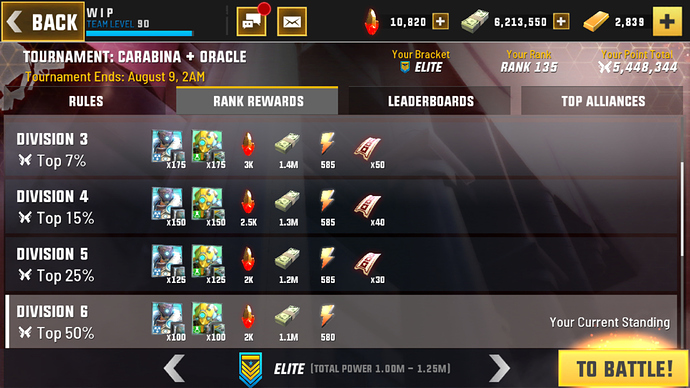 Looks like PVP bracket was tweaked again… bummer. I should be top 100 and collecting sweet x175

I am not sure point of such small brackets and no transparency. No one has any idea as to how much they need to play to get in higher division. This is the most ridiculous thing done to break something that was fine earlier.

Interesting to see that the higher up players are getting lower rewards.

In addition to that, it looks like the lower ranked players are also worse off - in the current version of the percentage scaling system, lower ranked players receive lower rewards than in the pre-August patch when we had Divisions (where you clocked 1,250,000 points and were given the minimum reward for that effort).

I am not sure why they removed the top 100 it seems silly as it works perfect on the last event, maybe they were anticipating more people playing this event but forgot that the two middle brackets 499-750k are where most players are so it’s fine for me but as soon as you go up to 1m+ you are done for as not many players are up in that power. Ther are more mid-range players as of late making these brackets competitive but bigger players will struggle to get top rewards as top 100 has been removed therefore nerfing their reward.

The only reason I can think that this was done is to keep people being competitive and playing as you can get top 100 in Elite or Mythic and be done as you will get the top 100 rewards however that seems ridiculous as it is only hurting those players. I can’t see any other reason to remove top 100 tier other then the stop people being lazy if not enough players are taking part