I have suggested this before, but since I have access to the forums now, I would like to extend on my previous idea. I believe this game has tremendous potential and a lot of depth to it, so I have always wondered: why is every game mode energy based? Do the developers believe that players would lose interest in the game, if we were allowed to play the game for an extended period of time, or do they think that we would be more incentivized to buy gold to exchange for energy? I would argue against the first statement: this game draws in many different players, some simply interested in the character building aspect, but others -like me- are looking for a hardcore game on our mobile devices, where progression is worth my time and energy. We are the ones who are not playing for the sake of upgrading the heroes, but working on upgrading our heroes to perform better and see those upgraded heroes overcome harder and harder challenges. I would assume, that this is what the developers are slightly wrong about: they think, that the center point of the game is character progression and gameplay is just a means to achieve that. This is what I would like to try to argue against. The gameplay is good, with all the heroes, different weapons, unique abilities and a great looking environment, the gameplay shouldn’t just be a secondary aspect under character progression.

The last couple days I had some free time on my hands, so i decided to spend as much time dedicated to the game as I could, so when I am writing this, I do believe I have consumed 100% of the content the game, in its current state, has to offer. I am currently in the top 15 on the PvP leaderboards for the event and I have spent several hours playing PvP every day, for the last week. However, after I run out of lives, my energy is depleted and I have no Coop-raids to offer to my teammates, we are sitting there and our attention slowly shifts. Today, while sitting in my office, having done everything i could in the game, I found myself browsing the app store and news outlets for alternative games to play, not because I was bored of the game, or because I was upset, but because the game was not allowing me to do anything. There are many hardcore players like me, who like to be very invested in what they feel passionate about. We like to focus our attention on a simple activity in our free time (a game in this case) and do our best in it; but when the game is not allowing us to do so, our attention slowly shifts and we start looking for alternatives.

Here is where my suggestion would come in, but first I would like to state a couple things about the current game modes: each game mode feels rewarding to play, the energy/lives/replays we have correlates perfectly with the quality and quantity of loot we get from them. The way I envisioned this game mode would by no means compromise the flow of progression the current game modes allow, it would simply be an addition for hardcore players, to enjoy the game unrestricted.

The name of the game mode: SKIRMISH

Here is how it would look in the main menu: 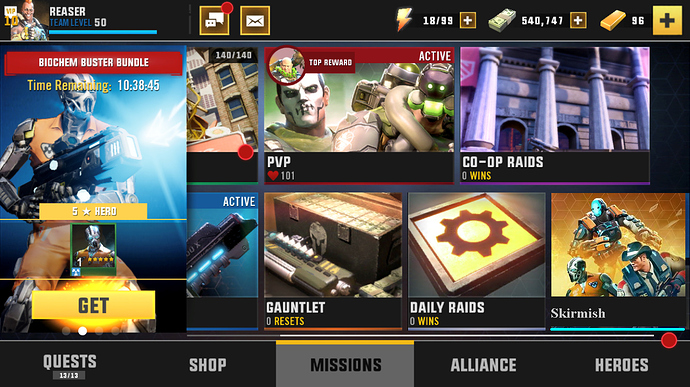 The game mode would allow you to play through the campaign missions with a friend/alliance member the same way raids work. (maybe it would require 3 or more players to team up, if the technology is there?)

You wouldn’t only play one mission, but the whole campaign section. After you select the campaign, you would also be able to select the difficulty, ranging from easy to extreme. (easy would have the same enemy hp and damage values, as easy daily raids, and the hardest difficulty would be equal to HP and Damage values of the enemies in campaign 7-10 hard mode) Each mission you finish would add to the rewards, with each boss defeated adding a small extra loot.

Here is how the Reward System would work: this game mode would primarily be for collecting bucks, silver crates and a chance to get some specific loot. Each mission completed would add a smaller amount of bucks to your “loot bag”. Every boss would drop a single item based on the difficulty you are playing on. (My suggestion would be throwing knives, throwing stars and fuel cells, because these are needed in extreme large quantity) . Only if you complete the full campaign section with the final boss, would you get a single silver crate. If you fail a mission, you receive the bucks, but not the items you collected from bosses. Silver crates and items are only given to you, if you fully complete a campaign.

I believe this would add a lot more to the multiplayer gameplay aspect of the game, while not giving too much away for free, thus catering to the more invested players. 20 000 bucks short of promoting a hero to 7 stars? Need only 2 more silver fuel cells to upgrade your hero to gold? Run a skirmish or two with a member from your alliance!

That would be my suggestion for a simple game mode with modest rewards and without restrictions. I would like to know your thoughts! Have a nice day!

great idea would have liked to see some feedback from devs

That’s cool, I like infinite modes where you can play as long as you want until all your heroes are alive, and if all your heroes die, your score is saved and you can start over to beat your score. And there must me a rating of players to see who could go farther. Of course some players would play this mode 24 hours/7days a week on autoplay, that’s why you should give a reward only if you beat your previous score. If you don’t reach your previous score, you will not get any reward or at least will get a small compensation for your effort.

Moreover, we CRITICALLY need a mode where we can play using only one of our heroes, a 1 VS 1 PVP mode and a compaign mode for each specific character. We need this in order to feel each character. THere are some character that are not so strong and we never use them, or allow AI to control them, and this must be changed. All the heroes are so amazingly designed and have unique skills, thank you devs for that! You have to use this feature if you want to improve the game experience.