Seriously. 4-Cep is almost unplayable now. Same boat happened with Sapphire in past when she got huge nerf of her fire rate speed. And only with late little buffs she was playable again. Make this and with 4-Cep. Or he became in AW cannon fodder hero like Xianiju.

Even with full team of heroes which increases fire rate 4-Cep don’t have atleast half of his previous speed.

I not so often choose him in PVP and run with another heroes like my main DD, but 4-Cep was ideal for any PVE. Current nerf totally destroyed him in this role. And this very sad thing what few of PVP abusers ruin fun game for PVE players.

I will stop you right there. His bronze is still complete murder and he’s still got the firepower to win. Stop complaining. Yes it’s mildly upsetting that he was nerfed, but so were some other viable hero options worth being bothered by.

He fits his Support role better now. He is still strong. Ruby skills will also unlock in the future, the Supported passive skill and its 30% dodge chance for a (damaging) hero makes him more potent and is an unusual combination. Not many heroes are like him.

Main trick is 4-cep is his huuuuuuuge fire rate with heavy damage. His active skill was used very rare and in very special situation. Big amount of battle active skills is absolutely not used during whole fight.

So your remark show what you is completely don’t know this hero and start call whining for nothing. I’m not winning. This is healthy feedback after new update.

I don’t know the hero you say… 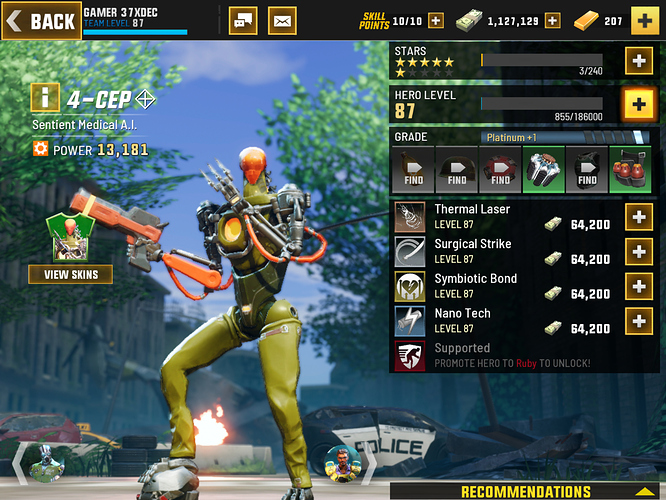 I have maxed 4-Cep (10* /5 bars / maxed equip) and played a lot battles, modes and events whit him. Your baby 4-Cep may still menace in your current tier, but at high levels content his nerf is critical.

Actually the nerf was a good thing.
Now that the fire rate is lower, I can land headshots easier and I don’t need anymore to do burst

Seriously. 4-Cep is almost unplayable now. Same boat happened with Sapphire in past when she got huge nerf of her fire rate speed. And only with late little buffs she was playable again. Make this and with 4-Cep. Or he became in AW cannon fodder hero like Xianiju.

Sorry but this is not what I am seeing at all. I just played a bunch of PVP matches against top tier players and 4-Cep is still decent. He just isn’t ridiculously OP like he was before the patch, to the point he could burst any non-tank hero down in 5 seconds. Now it takes several seconds.

I will say, with the nerf, his bronze could probably stand to be buffed up again so it’s not so worthless. I also like Mandrake’s nerf since it’s not a luck reliant skill anymore. I have had hundreds of matches where I lose because my opponent’s Tomahawk stunned me, or mine did/didn’t stun an opponent. I think Mandrake’s platinum needs a buff to help compensate though.

4-Cep’s nerf has helped make other heroes stronger in comparison. I think Kurtz is going to really rise to the top over the next few weeks, but hopefully he will be addressed next. The rate of fire nerf to 4-Cep was pretty major, but it was much needed and he isn’t as grossly OP anymore.

Exactly, he is at a level of decent now, WHERE EVERYONE belongs

So, now that you nerfed 4-CEP into the ground, do the same to Shivs cause her burst and low projectile spread is equally stupid and game breaking…

They both did get nerfed. Her reload got super slow, as did 4ceps rate of fire. Both mean their DPS has gone down.

PvP games feel a lot slower. Instead of nerfing shiv and 4cep, maybe buff up other bio in the future. I understand that its probably easier to modify 2 characters versus a bunch of others, but the overall experience isn’t the same. I hope this feedback helps for future changes.

Thanks for letting us know that you feel PvP goes slower now! That’s the kind of feeling-based feedback we prefer. Prescriptive solutions don’t really help.