Hey Hunters! I have another concept for you guys to check out!

I present to you; 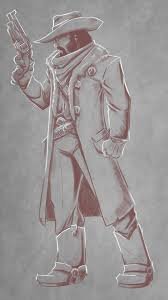 He may look like the picture above, also brandishing a brown weathered and torn cloak around his left shoulder that slightly drapes along his arm to elbow length and slightly across his back, he also has a large pink scar across his face, and all along his “gun arm”. He also has bullet holes in his shirt but no damage underneath, rather a purple shaded color of skin where he regenerated most of his wounds.

During the first months after zero day, this outlaw brandishing a western style and ego named himself zero, feeling as if he was the king of the new world. His ego corrupted him into thinking he was unstoppable since he couldn’t lose a fight. He gained respect from everyone except the magistrates.
When a new gunslinging robot made by the magistrates was told to exist, zero wasted no time in arriving there to show he, and mankind, was better than any robot.
Dogface arranged a showdown between the two to see who was truly better. The winner turned out as Clyde, who was barely hit in his shoulder. Clyde had gotten to the trigger faster than zero allowing him to lethally strike zero in the chest twice and a final shot through the head.
No one thought zero could recover except maybe to save him until he could be saved. He was cryogenically frozen, much like the super soldier serial, until the possibility of saving became a reality. But then he went missing, only to reappear some time later with a new look, and a new feel. Someone had used void heronium to allow him to regenerate his wounds and save him. Although zero only cared about himself, he sees there is more to the world than himself. Doesn’t mean he cares about anyone, just means he will be less egocentric and use his slightly damaged brain more often and think again rather than act on impulse. Zero still searches for his savior to repay him for his recovery and new found powers which might be the only good thing he will ever do, since he still values a dime over mercy.

This hero channels his void energy and lashes out at an enemy hero dealing percent damage each second for 5 seconds (damage increases each second) and healing Zero for 120% of the damage inflicted and allie’s health by 40%
(Heal amount for allie’s improved by 0.5% every level)
This hero will stop channeling his ability is he loses 10% of his max hp while channeling. (Increases by 1% every 10 levels)
Killing the enemy with this ability doubles this hero’s and his allie’s health and armor (does not stack)
(The dmg increases from 5%-10-20-40-80%)

This hero charges himself, healing himself for 20% of all damage he accumulated through the entire battle and 10% for his allies, allowing him to heal more each time after enduring damage over the time in the battle.

This hero gains unlimited ammo for 5 seconds when this ability is used. When this hero hits a target, the next shot will have no recoil and additional (Void Damage)
(Active an extra 0.1 second every level)

This hero has a 10% chance to take zero damage every time he is damaged. Headshots will negate this effect

If Zero misses a shot, he doubles the damage of his next shot. If he misses two shots the dmg does not stack but he recovers 1 ammo every 2 times he misses a shot, as well as recovering (hp)

This hero deals double damage to the first enemy he damages for the rest of the mission, if the enemy dies he can apply the effect again.

The difference between a good DPS hero and a great DPS hero lies in the amount of damage they can dish out. This hero receives a Elemental Attack Damage bonus and a 30% charge for their bronze skill.

What better way to let you know how this hero would be like than to compare him to already existing characters?

Which skin bonus would you prefer?
Skin; Rare Plus skin mentioned before this section,

Thx for reading hunters! Hope you enjoy my ideas!(Expect the lore tomorrow, along with any grammar changes

Updated to include lore and a few minor changes to abilities.

The concept is triple awesome. Plus a big point to the creativity of the platinum skill. I’m quite fond of it!

I won’t find much use for the plat unless I need health, this will mostly be for people who can’t aim hehe, (basically a 2.0 of luciana’s gold in some way)

Edit; I mean the first part of the plat isn’t too useful sometimes; the second part is very, revolving around the style of gunslinging being adapted too.

Small changes via grammar was made;

Also I was asked how long the Ability charge rates are;

Silver charge is completed every 25 seconds.

The bronze, with sustained fire, can charge every 20 seconds, and even less with the ruby charge rate bonus.