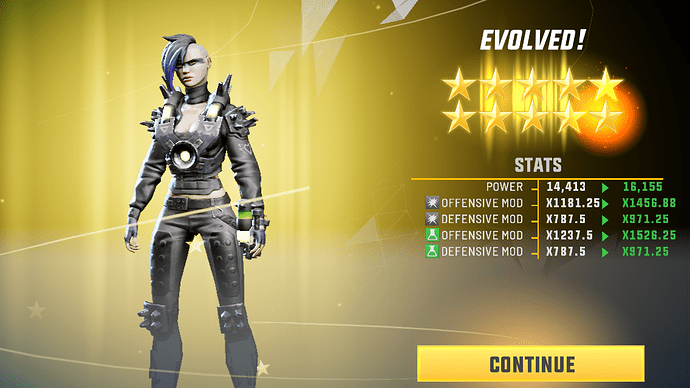 I’m happy. I don’t think a mobile game has kept my attention for nearly a year. Other than Brave Frontier, but that’s in a different genre of games. What’s the best use of the Heronium I can get from her? The only good deals I can see in the Heronium store are the Elemental Fragments and not the Hero Fragments.

Mandrake and Mauler are probably your best options because they are the most farmable heroes in the game.

Disappointed in you, bro. I was expecting Operator.

He’s at 5 stars. It’s gonna take a while. At least I have a definite means of increasing his stars, though.

I’m suspecting the next hero they release gonna be a bio hero so I’m buying bio frags as soon as I have heronium to spare. My goal is to be able to 10 star the new hero day 1 so I need a bit over 2000 frags! I have 500 ATM so it’s not impossible by any means. I don’t know why I’m writing this here. Congratulations on your first 10 star. I would suggest Mandrake next aight.

That’s always my intention too - to 10* a hero right when they come out. I’ve had the frags for it for the past several months, but I can never get over the mental block of “Well what if the next one’s even better??” So I always just end up getting them to 8* for the second-highest bounty multiplier and then leaving them there.