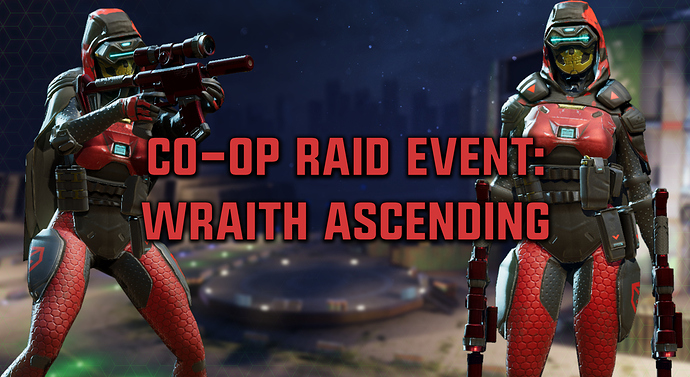 Welcome to Wraith Ascending, your chance to win an exclusive Carabina Skin!

Today is the launch of Wraith Ascending, our very first Co-op Raid Skin Event! Pair up with friends and take down Gorgons to win tons of great rewards, including Carabina’s exclusive Blood Wraith Skin! 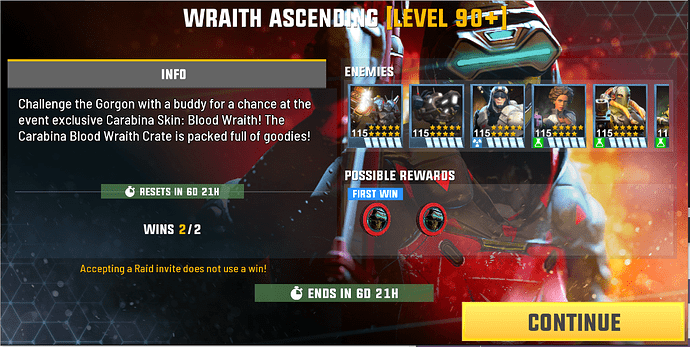 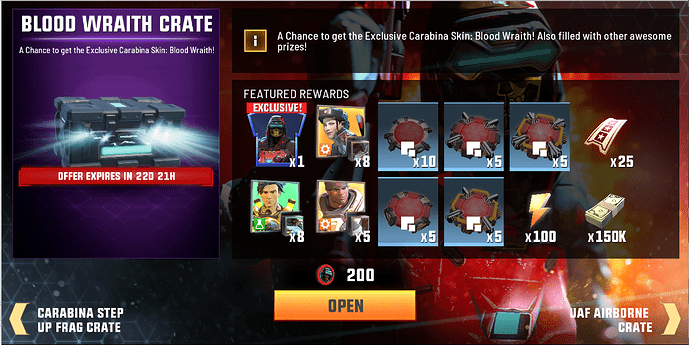 The Blood Wraith Crate is filled with great rewards, including the exclusive Blood Wraith. You can also win Platinum Core Fragments, Hero Fragments for Beck, Kaishi, and Shank, and much more!

You will also have a chance to purchase Blood Wraith Tokens through a special offer.

NOTE: You’ll need to have a Team Level of 40 to unlock the Skins function and equip your Blood Wraith Skin if you win it. If you win the skin from Team Level 35-39, you’ll still own it, but you won’t be able to equip it until Team Level 40. 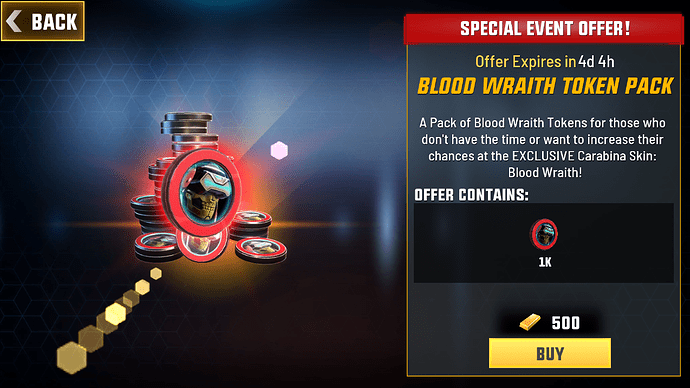 Looks pretty sweet! I don’t have Carabina, but I can always go for more Kaishi fragments.

Sure… the skin looks ‘cooler’ on her. I got it pretty quick…But why throw us a duplicate of GW and call it something else? So that’s 8 GW runs…geez. I like how they did the rewards tho. NOT complaining.

Cool! More of necessary resources in this crate

My only complaint is that it’s more Gorgons. Ten in total, if you trade them all. It would’ve been nice to have Dojo or City Hall return for this.

Can’t get the skin in the event even though I play daily, so I buy the blood pack and waisted my money still didn’t get the skin! I’m getting to a point that I’m thinking of not spending money on this game anymore… I feel like I’m getting ripped off. Buy 2000 gold for nothing, just to blow my money on worthless items.

I got the skin 3 times from the crate. It’s just luck bro. I did not get Commando. I’m sure I’ll get him eventually…

You actually kinda answered your own question without realizing it. Skins are quite a lot of work to create, relative to how much return there is. This makes it difficult to justify making new skins from a developer standpoint, as it would be a lot of effort for not much payoff. By releasing a limited skin alongside an option to improve your odds via money/gold, it makes it much easier to get a return for all that work. It’s simply not sustainable otherwise.

no the problem is that they are making it harder and harder to freely or cheaply earn things in game. as someone who has spent a decent amount on the game cuz i didnt mind small transactions with guaranteed rewards ive seen this go away more and more lately. ive put in effort to earn certain things that are becoming useless. an increase in cash grabs are a sign of a company trying to milk a dying cash cow for all its worth. these practices have and will continue to lose valuable and loyal customers. that is why i have a problem with it. look at the new hero system and see what thats done as well

The game is actually doing quite well. No cows are dying.

was able to get the skin within the first 15 minutes of its release. a few days later got it again. playing several rounds of the +85 one gives you 175 tokens per run. so you can open about 4 of them if you trade with your ally a few times.

I got the skin too and I got terrible luck. Just use some patience. But… MORE SKINS PLEASE. That would be great

I was a bit worried when I saw the 5% drop rate but I got it within the first few days. Can’t complain about that! I’m happy new skins are back in the game, so if this is the way they’re gonna be released I’m happy with that too.

Tbh and polite.
The drop rate is a joke.
I bought 2 times 500 gold, resetted twice for 100 gold and played every night since wraith is released with my ally mates. Nothing.

While ally mates got it several times.

It’s totally nonsense to release a skin on luck and gold!

The drop rate is a joke.

1/20 seems very reasonable to me, considering you’re opening 4 per day.

1/20 seems very reasonable to me, considering you’re opening 4 per day.

You’re using a sample size of 1 player in your example.

On average, 1 out of every 20 crates will yield the skin. Those are the odds. The fact that your personal luck has not ended up in a crate yet has zero bearing on the objective odds for the crate. That’s just the nature of randomness.

Here’s an example using your same logic:
I haven’t spent any gold on resets.
I haven’t bought any extra tokens at all.
I have received the skin four times.
Therefore, the odds are MUCH too high and the skin should be more rare.

See how silly that line of thinking is?

You’re under no obligation to spend gold on the tokens. It’s just a skin, and not even a particularly great one. If you miss out, big deal.

Glad you got it 4 times!