Who should be my 3rd Platinum Hero?

So I have Dogface and Nightingale Plat, what hero should I focus on next? 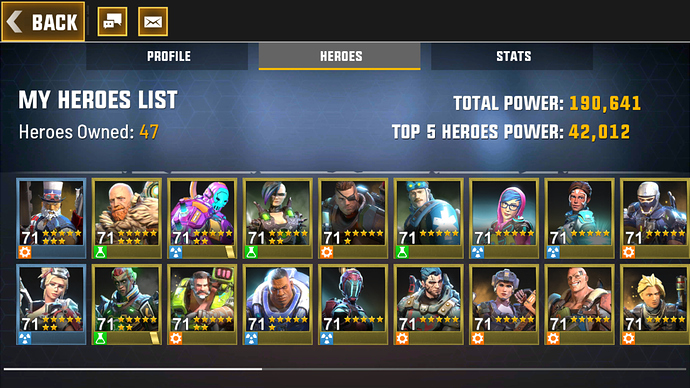 That Mandrake fella, imo. I posted something similar before and I got roasted for leaving my Mandrake as a Lvl 1 Green.

I would also vouch for Heimlock, Ifrit, and Flatline. Heimlock for PvE and PvP, Ifrit to counter PvP Mandrakes, and Flatline for bringing PvP matches to their time limit.

If you’re interested in optimizing your best heroes for PvP, don’t plat mandrake until your entire main team has scaled high enough for plat.

Ifrit is always annoying as hell to play against in plat level PvP, especially when paired with skinned night and flat. Halo also has the best plat in the entire game, so if you could get some extra stars for her that would be amazing. If you wanted to go full blown long term, you could get caine, mauler, and moss all to plat for a nasty pvp team. Moss and Caine at plat boost chance to crit hit, and mauler gold disorients heroes when he crit hits them at gold, and stuns at plat.

…especially when paired with skinned night…

I have a 7* plat ifrit, and I would not recommend him. My encounters with Ifrit as an enemy are about 5% “darn, Ifrit brought them back and I lost”, 10% “their healing was so tight that I never killed anyone” and 85% “so I killed them all twice; so what?”

If you’re a good shot, I’d recommend Hardscope, because there seems to be a month of Magistrates bounties in our immediate future.

Otherwise, you might go for a strong biochem since you already have mech and energy—Mandrake, Heimlock, Mauler, or maybe Phoenix.

You can be fairly certain that you’re going to promote or evolve the wrong hero at least once, so don’t sweat it too much. I have an 8* gold Matador whose frags could have profitably gone to almost any other pvp store hero…if only I had known.

My order of priority:

These are the current high performing heroes. Some heroes other recommended I decided to leave out, since I think they either are too niche or situational.

Panzer plat, amongst the group, is easily the most powerful in terms of helping you win PVP matches. Burst damage faster than heals can kick in wins fights, and Panzer does it the best.

Heimlock plat adds marginally more survivability to a common PVP team, at the cost of adding a non-negligible amount of matchmaking power. Still an ok pick though, as he forms the core of many teams.

Caine plat simply adds raw hitting power to your team. Consider making it your last or second last plat in your main team.

Mandrake plat is the least useful, but the stat boost to Mandrake makes it worth considering.

Now onto those omitted ones.

Ifrit plat is severely overrated post-nerf. As IceKobold points out, most of the time you get to see your heroes die twice, awesome.

Moss plat is good, but Moss dont really fit in the meta. Heroes stay constantly healthy in most fights with a fat 600k bonus health and dies to a single clip of Dog’s rounds. The meta is mostly constant healing until massive burst damage KOs key heroes.

Mauler plat does really sounds good though, I hear lots of experimentation but little success for him in the meta. Wait longer and see if he shines.

I have to work on Biochem hero, probably a healer because I care about Hero’s that can be use everywhere Like Dogface and skinned Gale. 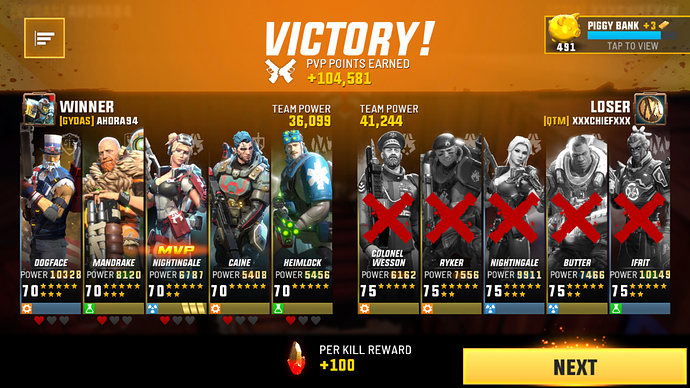 So I have enough uni frags to evolve Heim or Moss to 8*, what you guys suggest? Should I go for it?

Jesus, you have a near unbeatable team. Finish up girl Heimlock, then start upgrading the real Heimlock. You can choose either Caine or Mandrake afterwards.

In all seriousness, your team’s gonna stomp in PvP in the current build of the game, mostly because of Heimlock’s insane group heal-over-time and debuff cleansing, and Combat Medic Nightingale’s equally insane burst healing. Alongside your Mandrake and Caine, their crazy buffs can make your team untouchable.

Your Dogface is just there to clean up the trash. Hell, you could swap Dogface with a meme Hero like Elite Rifleman or Halloway and still win.

Hard pick Heimlock over Moss. Moss has superior raw healing power but Heimlock has the best burst protection, which is all you need in this meta.

I’m with @Cabbagesavager. Heimlock and Moss are both strong picks; choose one and go for it. Heimlock is more defensive, more self-contained, and already part of your pvp gang. Moss gives nice Bio dps in addition to the healing but should probably be paired with a strong single-target healer—Keel or Operator or both. If you’re looking to build a B-team to pick up where your A-team’s hearts leave off, you could do worse than the three of them plus Panzer and a fourth support hero.