Whenever I Min/Max with Ronin

I think it’s fun, playing the current PvP in Hero Hunters Why have 71 heroes in the game, but PVP is confined to less than 10 that are actually viable?

I tried to post a screenshot yesterday of the last 13 of 14 teams I faced to demonstrate a typical session in the game, but the mods took it down because there were too many screenshots and I should have used “better judgement”. I was trying to illustrate just how bad PVP has gotten and use actual data. Of those 13 teams, all but 3 had some form of Ronin, and half of them were the Ronin/Mandrake/Caine/Flatline meta we currently see EVERYWHERE.

This was during an off time so the best teams weren’t even playing. IF they were, I am sure the number of Ronin teams would have been even higher. Even still, over 75% of the teams I faced had Ronin. This is during a tournament that doesn’t even have Ronin as a bonus. Here were a couple of the gems I faced:

My question is, why have the devs let this go on for over 3 months now? Do they intentionally make it so only one teams is viable to give those heroes time in the lime light? First it was Panzar for a long while, then Mauler/Halo, and now it’s Ronin teams. I’m not expecting all or even half of the heroes to be viable at any given time, but it would be nice if we at least had 15-20 heroes that were all very strong at any given time.

Not to invalidate how you guys feel but I don’t understand why everyone is so upset with Ronin. I love when other teams use him because Dog always abuses him within 10 seconds and I control the match from there. Bring Ronin on all you guys want!!! I’ll keep racking up PvP gems on those teams all flippin day!!! 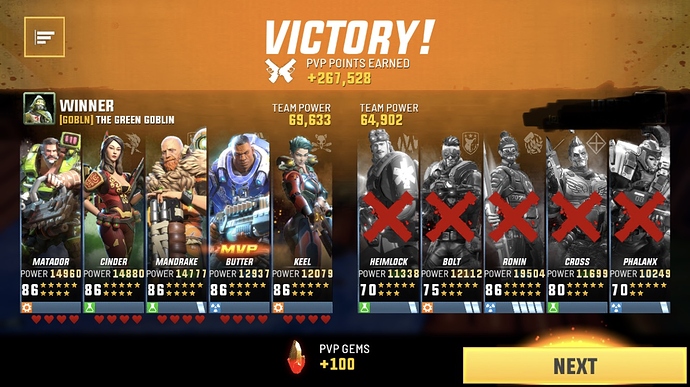 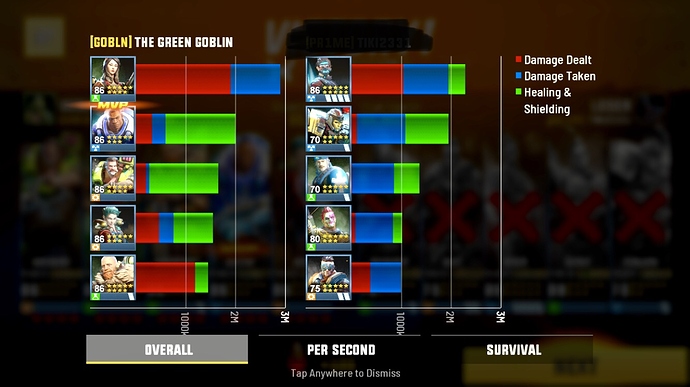 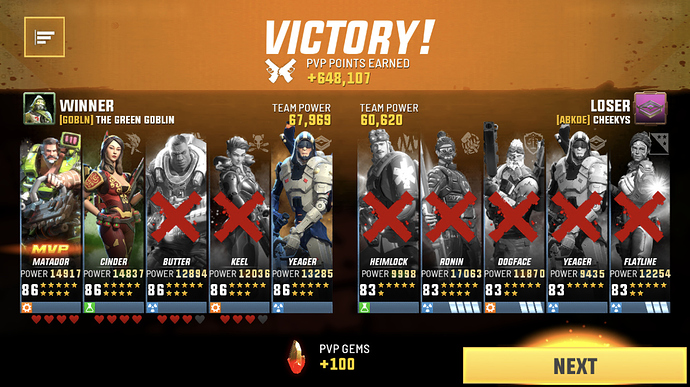 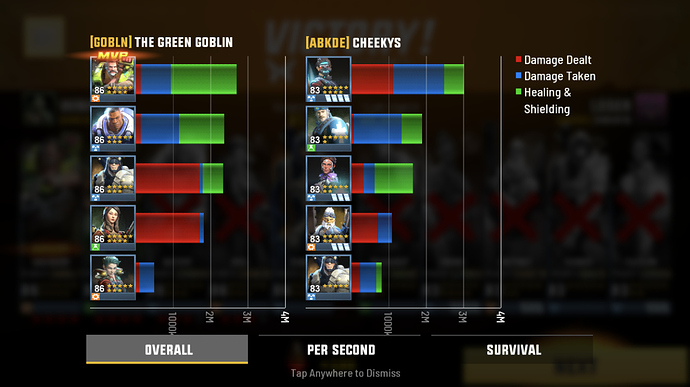 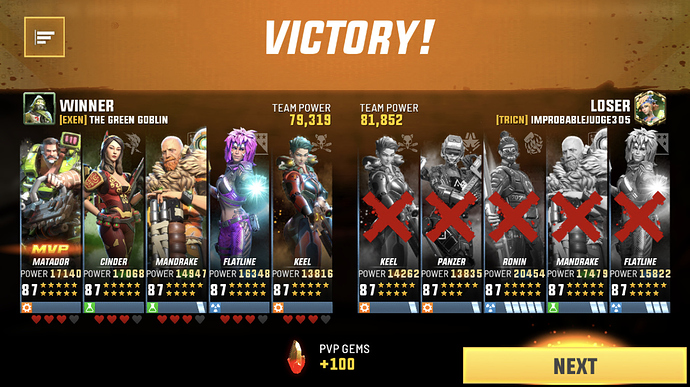 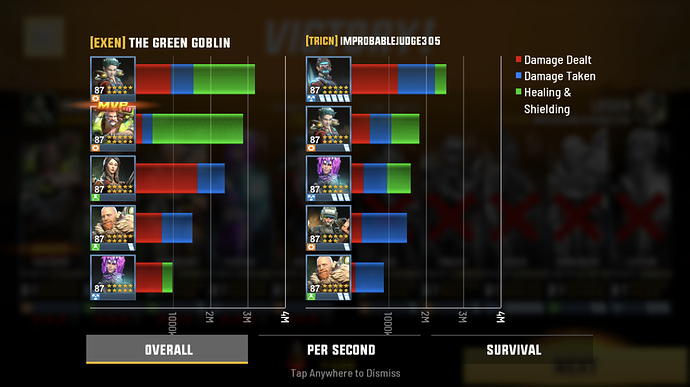 I’ve never did this much damage with Ronin. 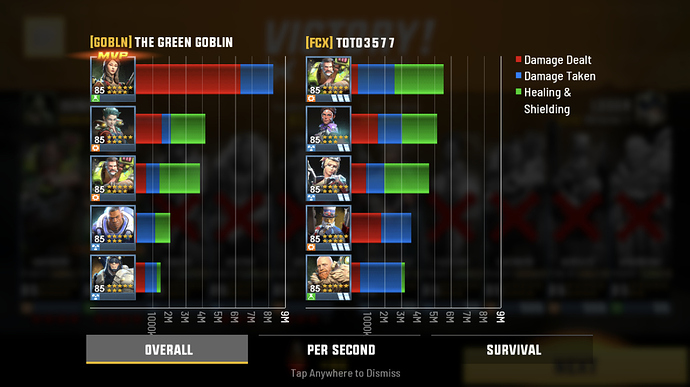 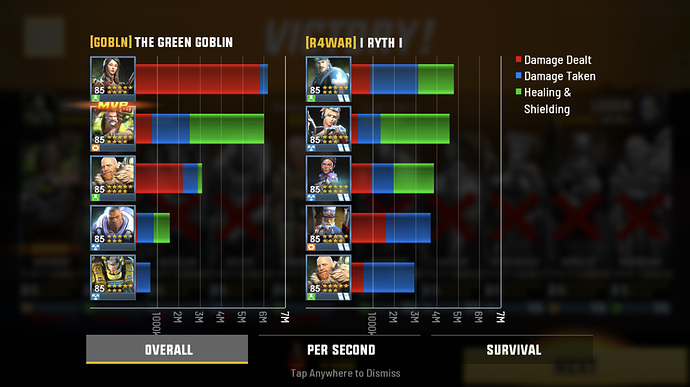 Oh don’t get me wrong, I beat plenty of Ronin teams. My team is actually pretty good vs him and I would say I win well over 50% of my matches vs Ronin teams. Some are even significantly higher than my own team power:

The problem is, he is used EVERYWHERE. The latest PvP tournament had 38 of the top 50 teams using him. This is in a tournament where he gained NO bonus points. People use whatever is the strongest meta, and right now it’s Ronin/Flatline/Caine/Mandrake. A lot of lower skill players jump on the band wagon so you will obviously beat sandbagging Ronin teams every now and then.

In lower brackets I think he’s more of an issue. Giving a team of 6* gold or platinum heroes double he hp, all the while gaining 13k attack power on Ronin is very tough to over come. Especially when you are only gaining a 4 or 5k power advantage for the lopsided Ronin team you are facing (which is negated by his buffs).

Oh don’t get me wrong, I beat plenty of Ronin teams. My team is actually pretty good vs him and I would say I win well over 50% of my matches

So, if this is true it doesn’t exactly live up to the ‘meta’

Anyway, there are a few factors that make this ronin combo okay in my opinion.

But honestly, if you’re still beating teams more than 50% what is your actual problem? I feel like the devs took this down because you’re just wasting your time contradicting yourself.
I think your issue is with people who play more than you.

I VERY clearly outlined my issue with Ronin. Since you seemed to have missed it though:

The problem is, he is used EVERYWHERE. The latest PvP tournament had 38 of the top 50 teams using him. This is in a tournament where he gained NO bonus points.

Just because I can beat a decent number or Ronin teams doesn’t negate the fact that he’s used by roughly 75% of players in tournaments right now. Keep in mind you have the whole gamut of people playing Ronin teams too. I beat a lot of lower skill players who don’t do anything except sit on their Ronin hero blasting away while their Flatline dies. I play people that are lower power level. I beat people who are higher power level. I beat teams who get unlucky, or I get lucky with hero skill usage and AI assistance. Panzer is decent counter to Flatline and Ronin too since she has an elemental advantage.