What's the point of Co-op PvP

What is the point of Co-op PvP if it’s plagued with sandbaggers and/or awful mismatches. The fact you can have not only a balanced team but a balanced Co-op team between both players and go against a 2 man all ruby level 100 team makes no sense. I know this a common gripe but at this point what is the point of these tournaments if the people who abuse the matchmaking get all the rewards.

Between the level 100 ruby sandbagggers and absurd matchmaking it’s hard enough to get rewards let alone climb leaderboards for people who try to play with balanced teams. Cause as we all know if we bring out the ruby Serials to deal with it we go again go up against 4 level 100 rubies with silvers as our teamates.

Take this as motivation & reach lvl 95 asap for revenge

but leaderboard and rewards???
it is necessary right.
I usually use gold +4 and I get matched with plat+1 (usually)
And we face a team wih 2 silver and 2 ruby players
that is not fair

Instead of complaining about it how about don’t play it?

I don’t like co op pvp events so I only play enough to get rewards then avoid it till the event is over. The devs can’t magically fix everything you complain about…only a hand full of devs and thousands of players trying to figure out a way to get easier wins…

People shouldn’t have to avoid a game mode they love just because it is unfair. I love playing Co-op PvP, but I shouldn’t have to worry about unfair matchups. With that being said, I don’t think it’s a good idea to make another topic because plenty of these Co-op PvP complaints already exist. The developers are already aware of the situation.

I usually take it as a challenge to use the most synergetic team possible, and try to work with teams with lesser power than my own. It’s a unique variable to not be able to control all of the heroes on your team.

I thought the same but then I remembered which division I was in. and since I auto match, I had to back down to get ‘better’ matches. One day . . . .

Some fine examples here I think…

Those three screenshots were part of a 2 hour round of getting one fair team then 2-3 like this . Not the other players fault, but how in the hell are lower level players meant to get anywhere with this kinda stuff going on. And anyone that tries the routine ‘’ you need to be balanced on power or you get penalized ‘’ excuse for this - the ruby teams are less balanced than us, yet they’re getting rewarded. Not expecting an instant fix, but those screenshots got deleted from an earlier post. An acknowledgement from Devs that the system is broken would be a start…

I actually used to hate coop for this reason but its fun to play with different ppl who you’ve “known” for years thru vip chat. It’s a challenge but just make sure you find an experienced player who understands kill order, the elements, strategies for different maps, etc. I played like 15 or so rounds with Raz randomly the other day and we lost two or three times but it was fun.

It’s cool to mix up your squads with heroes you really haven’t used much. Me, I’ve always kind of slept on Halloway and I was wrecking shop with him the other day. 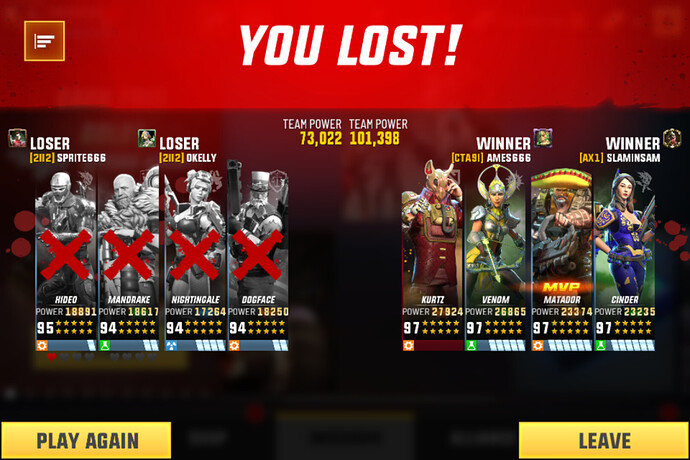 I always get happy when I don’t see my name in these screenshots :). Yea I think the system tries to match everyone with real players as much as possible more then it cares for power differences. With this in mind then you will understand how co-op pvp works.

I at times use completely unbalanced teams all day everyday and I hardly play real players because of the time of day I play. When I play when choy yoyo is online then no matter what teams I use balanced or not I play him so then I have to use a high power team.

Once you get the hang of it then you’ll figure it out. Better to play it and figure it out then complain all day for them to fix something that a lot of other players already enjoy. This is coming from someone that plays at least 500 co-op games per day. Cheers

Ps to the devs, you ever notice people always complain for you to fix something that they feel is too hard? Omg co-op pvp is broken, Mk cores too hard to get, ruby hero’s are unfair lmfao.

We play about 2 - 3 hours a night . Our time of play is limited because of our time zones. When we use unbalanced teams we do good. But when we make balanced teams that’s when we get badly over powered teams.i very much enjoy coop pvp. Just know it can even be better if they would fix the balance issue

I dont think rubie heros are unfair. And I like a challenge. Yes coop pvp is broken. Lol

We’ve both been in game a long time, and more than “have the hang of it” with pvp. We only used plats once rubies had been used up, and the point is that newer players only have plat heroes. Getting matched with rubies is not beatable with that power difference, plain and simple.

Can’t help but think the only players that defend the system are the ones milking it for all it’s worth… and yeah, if it’s broken we’re gonna say something.