How is striker still at full health and shooting at me when he us dead. 3rd time I’ve ran into this 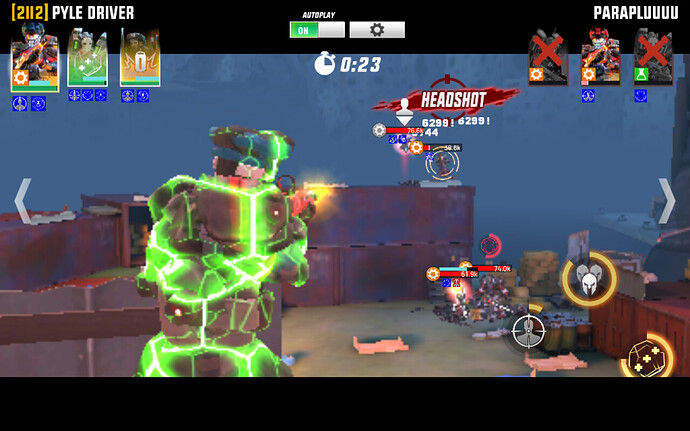 That is not striker. It is the hunter killer drone deployed by striker
You will usually see this when playing against AI
The pilot icon will remain on top of the deployed drone even when the character is dead.
FYI: the other characters on screen are the commander and the shielder and grenadier deployed by him

Striker is dead. What you see is a striker drone controlled by the ai (bug) and a few troops from commander

I am loving these ‘bugs’, seriously. Especially if they are only present when the commander is in the fight. That feeling of KLG backup bringing in any whatever skill is so cool. I’m want to see them buff and ally with dogface skills. I think I’ve seen an ally get buffed with what looked like one of Steele’s skills. Imagine serial, harbinger or sapph with heavy cal on top of their basic stats

I wouldn’t call this a bug. Its more like a lag in the game

This has always been there whenever you are playing against AI in PVP. At least from the time I started playing this game (1205 days Ahem… Ahem…)

You can see it with Min, Halloway, Hivemind, even with castellan at times, the piloting icon will remain on top of the turret for a few moments before moving on.

Thanks everyone. I’ve been playing for a while also but this is the first I’ve really knoticed it. I thought maybe skynet had taken over the AI.

Striker bugged after this update too. Her drones after defeating of Striker must go and selfdestracted with her killer, but now they still in game.

That is Commander. When Commander summons his minions, everyone recovers health depending on the level of his skill. So that drone could have been near death, but because Commander summoned minions, it recovered health back.