We come to you with a simple question. As we are now nearing the end of the transition, the social media aspect has been fully transferred. So before we do anything we want to hear from you first and foremost, what content would you like to see on our channels?

We want to make sure we’re on the same page as you and bring you the type of content you would enjoy, and we would enjoy making, as you are the heart of this project.

I agree with Junaid.

Just a clarification guys, this is purely for social media and player interaction. Believe me, when the time comes we will ask you about in-game improvements and suggestions, but right now this is a purely selfish post from the Community Management team lol 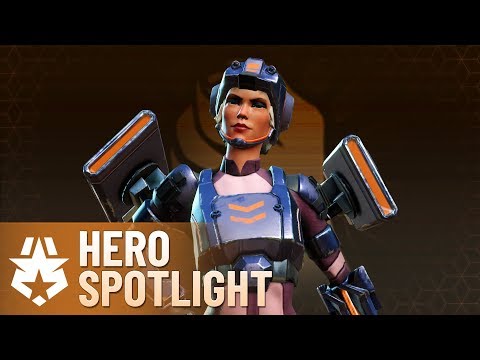 Everything. The game needs healing. It is great to see DECA is willing to get more in touch with the community and that is one great step to take to do so.
To answer the question. Q&A’s are my favorites!
Additionally i want you to know for future posts that there’s the option to build polls! May be usefull for later!
Much love from Mellow!

for everything you gonna do

Hero spotlights were amazing back in the day.

I think a lot of us would like to see why certain decisions are being made and to have that level of candid communication along the way.

Change up the forum a bit to make it look cooler? Low priority, tho.

I want to see more developer/artist depictions of heroes. Like, early sketches of heroes that were just released. Bring on some new wallpapers. On a social aspect, create some official YouTube content, and maybe even get some streamers some spotlights!!! Twitch/YouTube would be a terrific way for many of us to help share our love for the game by helping you guys to increase the player base. Let us get engaged. We want to see the game grow and these new media outlets are so important for gaming nowadays. Use them.

Back in the day, they would be more involved with the community. So it wasn’t just some hero spotlight post. It was a small video showcasing the hero. At times there were contests where they showed the hero silhouette and moves and the player would guess what the moves did. The winner would get the hero for free upon release. Can’t remember the last time it was done, but that was years ago. I remember it happening when Wesson was released.

If a sneak peak were to happen, concept art or a brief video of the hero or something.

Social media wise, it’s pretty much been basic for a while. It’s just posts of “this hero is joining” and “it’s bounty weekend”. Posts that get the community to participate and talk instead of whining on hero posts to fix something is something I’d see.

Just my 2¢. I know in game related stuff will be asked down the line.

For Youtube, if the hero spotlight will follow the same format in Forums like previous devs had then hero spotlight on YouTube will be extra work for least output, maybe this is why hh devs also stopped doing that on YouTube but, might be helpful only if deca spend on advertisement so algorithms pushes those videos & attract more people.

I would like to see a tutorial video on explaining basics of every mode by playing it, like how to attack in war, edit defences, work of boosts in war, explaination about bounty, etc… These are just 1 time videos to help the new comers.
Behind the scenes.

Polls regarding how much the community liked or disliked previous updates so that devs get an overall feedback of the community for the contents devs are giving in hh(if that matters) but still helps to keep the community in a hope that atleast devs can see their feedback & the community too… Gives the feeling that someone may listen…players had lots of hopes with previous devs but anyways.

On a side note, I would like to know, if someone has some in game related suggestions then which place will be best to post them? Support in game or here in forums?
And if someone has to complain about an issue?
Still no way to talk about people who were chat banned?
Cuz saw some people in vip talking about how few were banned for a good reason but then some were banned just because of someone’s ego or people who do not understanding how to use block button.
Anyways, if the answer is still a no then all good. Best of luck for those players & also best of wishes to deca devs for the future of this game.

Can deca devs make a separate section where only deca devs reply to the post and not the players? Can see the previous posts where some people criticized & addressed the issues, some in constructive way & some were not constructive…but the other players who give their response as a disagreement were mostly blantan lies or arrogance or pointless or maybe something which makes the bodyacher more furious or maybe Sometimes it’s good but the person who complai just to show their feelings might won’t stay polite for long enough specially some people who constantly defend even if there is actually a real issue is being addressed.

Anyways, many people are inside their home these days or stay inside home most of the time due to the pandamic, advertisements might help a lot to gain more traction, previous devs did almost nothing in advertisement so all these social media changes will be more worthy if devs decided to do advertisement too:)

A very selfish suggestion, would too see an announcement about Gilded Tokens Event soon in any of hh’s social media platform.

And seems more open on what happened inside…

As for me, I just want to know reasons why some suggestions can’t be applied in this game…
Lets pick 1 example, like people asking when will the next Gilded event occured… No devs have answered… Or the previous havoc bounty when u add milestones but not the rewards… Why?

Maybe if the devs can show some statistics behind the “unpopular” decision, people will be more understand and won’t going rampant…

In my most opinion, Community contests would be a great catch to to all of us hunters, like you know, prizes and stuffs. But what i see that would make the community love is what if you guys make a community contest like,

SKIN CONTEST = all hunters has given a chance to create a skin to their chosen hero they want to have a skin, and all skins will be voted thru community and also you guys as devs. and the winner will be featured and will be created an ingame skin.

HERO CONTEST = all hunters has given a chance to make a hero and backstory of the hero they want, also with skills.

GAMEMODE SUGGESTION = all hunters has given a chance to make a gamemode and the reason of why that mode is necessary or why should be placed in the game.

While as for the 5, what i thought is that, how about you guys include us also about what you are thinking on how you will improve the game. like we can help decide what you guys thought of your upcoming plans and we say what is on our minds. like some surveying on us… that would make the community and dev go even closer.

P.S. i trust you guys can also solve the issues like matchmaking problems and bugs, so yeah.

Honestly what i want to see now are the 3rd, 4th and 5th Collaborators for closing the element circle.

We already have a Frontline

.
Then we miss a Rearline

And release the Heavy Gunner

Ooooh yeah sketches and art!!! I love litteraly everything that goes on behind the scenes. Like concepts, backstories and lore!
Raz, have you seen Cinder’s concept art? It looked waaaaaay better than it is in game. More shadow, details and generally less soft. Current cinder feels so blank

Some YouTube video interviews of the original creator team.
Talks about different aspects of their creation process.

B. Separately i would add another Q&A from that topic that is off topic but still similarly game related. So whatever develops in this thread doesn’t convolute the good content received and replied to that is on topic that everyone can and continue to brainstorm from. We also are able to capture these separate ideas and can in turn make those points in new questions that can stay on topic and other related questions and feedback this inspires doesn’t convolute that thread. And the Integity of that thread also stays on topic to inspire more ideas.

Anyways these are just suggestions i think would improve things to start off before we get into game play improvement discussions and other things l.