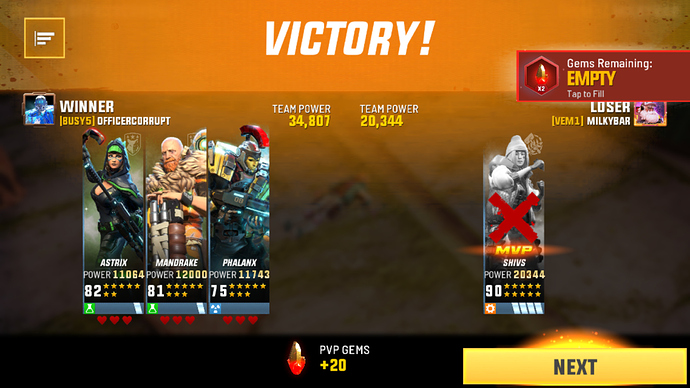 Some folks think they can win by using an OP maxed out hero against the other team. But that won’t always work.

This is one reason I like Jarek so much. He can easily disrupt a sandbagging min-maxer, thus throwing a wrench into their plans. Feels so good when you can pull a win against someone using those tactics.

But yeah, Shivs and Ronin are easily the two heroes I dislike the most, without a doubt. They can go eat sand.

Well you won because you have 2 Greens.

Are you complaining when you won? I would be only if I had lost. Yeager was very good at this though pre-nerf.

no im saying things like this shouldn’t
exist? This is something , that makes me want to say: make the team miniums rise

I’m also saying that it’s a non-issue when the existing penalties prevent him from beating you. If it ever comes to the point where the single guy starts beating full teams then u can trust that they will nerf him. Look at how useless Yeager is now. 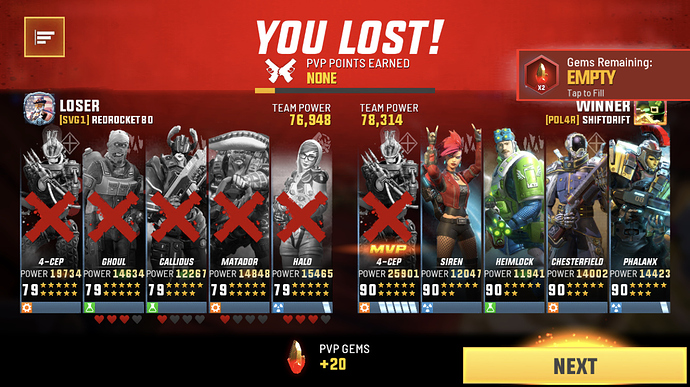 I was just wondering some thoughts on this. I do try to run an even team most of the time and of course always run into sandbaggers. Can’t figure out when I do run into a sandbagger they are alway higher power than I am. Thought it would be the other way around unless I’m the one with the seriously unbalanced team. Granted I know this isn’t the greatest team and I win enough to not care about the loss just thought this was fixed better than this. And I run into it a lot more 76-80 k range. Thoughts?

you see, your team is well…too unbalanced. thats one reason why youre getting beat by sandbagging teams.

they try to match as fast as possible, so

To be honest, it’s hard not to min-max in a PvP tourney where you get unlimited lives with 4-CEP. It’s one thing if he was running a maxed out Shiv and patsy, but in this case, he’s running 4-CEP in a tourney with unlimited lives. Not to mention, shiftdrift is also running 3 additional bonus characters. You can’t really fault him for trying to maximize points in a PvP tourney.

Ok point missed. No worries. Didn’t care that I lost to sandbagging team. I beat them as well it wasn’t my point or question I was getting at.

How is this still going on. This post is almost a month old

Devs have said that the match making basically tries to match you with an even team. This includes sand baggers where your team will have a higher team power advantage to compensate for them min/maxing. If it can’t find anyone, it will then broaden the power level difference and you may get faced against teams who are min/maxing AND higher power. If it still can’t find an opponent it will usually face you vs a computer.

i mean…it looked like you had a chance. just had to constatly target 4 cep

I suck at PVP, so I thought I should find some advises/guides on the forum,
and what I see is, both
“your team is too balanced”
and
“you team is not balanced at all”
are solid reasons of losing PVP matches.

what is going on with this game?!

in the picture posted above, the power difference is what, 1500? That’s negligible, almost no consequence. Team composition was the deciding factor here. You both clearly came out swinging with 4-cep but he was shielded and HP boosted and you were not. And I imagine that Siren song hurt a bit too.

The reason this team was Faced against a team with 5 bar 4cep is because your team does the same thing on a lesser scale. Look at the power difference between your heroes, it makes 4 cep rough to use because of how easy he is to min max.

The 19k 4cep compared with the 12k callidous is the reason you were faced with another min max team, granted you probably didn’t realise that team counts as min maxing as they are all 10* platinum base