What does Balance truly means for HH?

Hey!!! Hope you all are enjoying & safe!

I tried to do every single possible weird things(can say experiments) in this game.But,still 1 thing is not quite clear to me…
& this may or may not be an important thing for everyone.

[1]Can I know what are the criteria to consider a pvp combination/team as balanced?
People say unbalanced team/combos got punished from match making & i know they’re not wrong but, they’re still wrong according to what i experienced in this game & maybe according to system or algorithms of this game.(I’m not asking this question for the reason that if I played with balanced team then, i’ll also get fair match up,I would love to have a fight with tough teams or sandbaggers/min-maxing don’t know what these words actually means but, people use these words against some smart team compositions)

[2] The most important question for me to create this topic is…Can I also know the criteria on which an alliance can be considered
as Balanced alliance with respect to power of each member that ally has or if there’s something more then,I really want to know em all.I never got any clear cut answer from anyone/anywhere so,I am asking these questions here.

The fun fact behind it all is that sandbagger or not, 3 man teams or not, they are thoughtfull teams and smart setups, and especially using that advantage of having lower opponents or using lower allies for a better damage dealer is rather smart than a ‘skilless’ team

Building a team oriented around for example Ronin is not ‘skilless’ in fact it takes resources and thought to get the right combination to not only boost his damage but also keep the allies at a certain level for their max potential on that team, in fact everyone is complaining mostly about people being too smart if you think about it

A balanced team in terms of matchmaking is one where the heroes are +/- 1-300 power from one another, one way I do this on my smaller alt is to have a 5* hero at gold with level 50 skills, this gives around 4500 power, a 7* hero may need to be silver+1 with lower level skills however as their power will also be 4500 at that level but likely jump above 5k at gold level 50. By having your heroes similar in power you are LESS LIKELY to encounter mismatched or sandbagging teams. Now notice I said LESS LIKELY and not impossible, just because you are running a perfect balanced team doesn’t mean you won’t run into those players, chances are if you run into them however they will have less power than you. Now this is where synergies and skill and what heroes are being used come into play as someone min maxing with 1 platinum hero and all bronze may face you at all gold, they may have less total team power than you but because they have a platinum hero they may be able to beat you still. This is just a fact of the game that heroes stats vastly improve with higher stars and higher upgrade levels.

Regarding a balanced alliance, the same concept applies except things are broken down into more brackets that are hidden. If you run an alliance that is mismatched with players at 200k and players 1.8m then you will see a delta of 10m in your wars. This means an alliance at 20m can face others at 30m despite them being in the next bracket up. A balanced alliance means your players are +/- 200k from one another, any more than that and you may start to see you’re paired with larger alliances in war. There are also other concepts war takes from PVP, such as having an incomplete alliance. Just like having under 5 members in a PVP team matches you with others doing the same, war does the same when you have under 25 members. Try to keep 25 members and keep them all around the same power. Brackets are an interesting one for war as nobody knows where the cutoff point is, TSTK is around 17m for example but if we jump to 18m we face much higher and stronger alliances, this could just be a side-effect of facing different alliances than we normally do who are inactive however. This won’t apply to you but I will mention it here anyway, when you reach the top tier in war around 40-50m if you stay below 44m then you are unlikely to run into the top pool of alliances being 49-56m, under 44m alliances tend to face alliances at that power or weaker, not sure why this happens either.

I already said about this but, some extremely smart people can’t Understand what ronin & KURTZ’s plat skill trying to convey them… That’s why we should not try to respond illogical & senseless statements…I rarely use sandbagging team but, always spam them everywhere.

I know why TSTK constantly play around 16-18m power… You guys are using the match making system smartly & that’s a cool thing.

I remember once you warned me to not play wars with 80k level 52 player cuz, it’ll punish us badly in wars… Like you said we’ll get matched up with 30m+ alliances in wars(we had 21m+ power at that moment) & that’s why i sent that guy in another alliance… But, then, i thought… Why don’t take a chance to try something weird? So, we did like…
In this season… We played 1st war with 21 members (total power at 21m around) & we match up with 24m+,27m+,28m+,29m+ & last one i forgot. It was a roughest war for us due to some special reasons(I know they can’t forget us after that war).
In 2nd war… We try to push this uneven match making on another level by thinking let’s try to get a match up with 35m+ alliances… Then, we took our 2 low players back to make our alliance more unbalanced… But, we got unlucky & can’t find any 30m+ alliances… They all were around 28m+ only…

But, we didn’t loose the hope ti get a match with 30m alliances

…Then, we tried again & took a really very low player in our alliance during bounties & let him stay with us for this last war to… 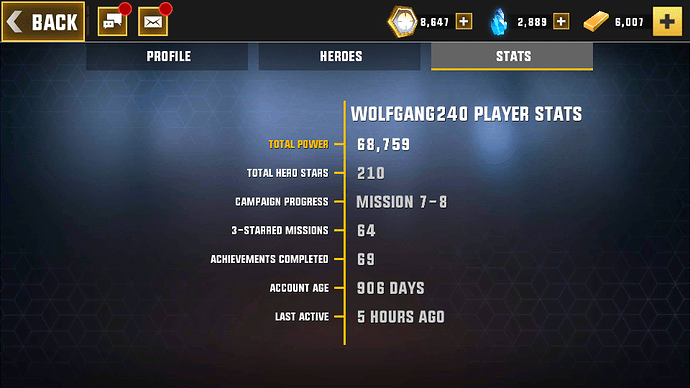 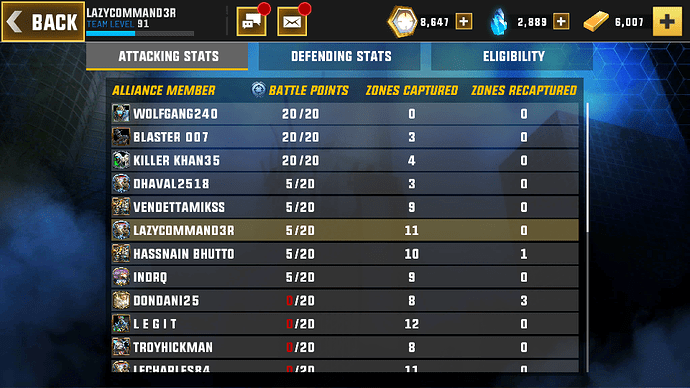 So, match is still confusing for me… The delta was not for 1m+ we tried to created the delta about 1.9m approxly

It is either chance that there were no alliances at 30m+ with bad matchmaking as well to end up with you in war or it links in with my theory surrounding different sub-brackets of power. I suspect you are pushing the boundary of your current bracket and won’t break through until around 26/27m

that’s what i was thinking too… i guess HH is using some kinda brackets with their algorithms for match making(I didn’t know any good technical word but, what i wanted to say is, there must something like bracket with 2-5m difference of brackets for match making)… I guess Muninn can tell us what’s the actual criteria for balance alliance or is there anything like balance in hh?

I have one more interesting thing to post about wars… But, let’s wait… & when i’ll get confirmed then, i’ll surely post that in forums & I believe it’ll change the perspective of many players about wars.

@PredatorJ82 I’m sorry you feel this way and I can say that with meaning because I’ve felt that way many times. I hope you come back from this and I hope this is the first time you’ve blown up in this manner and some leniency is extended to you.

While this game is currently in the stages of transitioning players past the level 95 mark, these types of matchups are going to happen. There are ruby heroes that don’t hit very high on the power scale and there are platinum heroes that smash the power scale. In the level 95 to probably 99 range, rubies and plats will match up and I certainly get my share of matchups where I just laugh at my enemy team as I know death is coming. BUT, I still try and sometimes I surprise the heck out of them.

Anyway, I know where your anger comes from and, well, just keep trying bud.

Just wait when i’ll hit 95…then, i’ll show how to actually sandbag/min-max/whatever it’s called with rubies.