What differs them is that I stopped leveling Salavtores skills up at 55 but Hideo has level 70 skills.
So why does Salavtore still have higher overall power than Hideo? I always thought power was strictly based on stars, level, equipment and skill levels.

So story short:
Hideo who has more base-stars than Salavtore, who has noticably higher skill levels, a tiny bit of better equipment but the same promotion level and star level, how come he’s still the weaker one?

This is not important at all, just wanna understand it better. 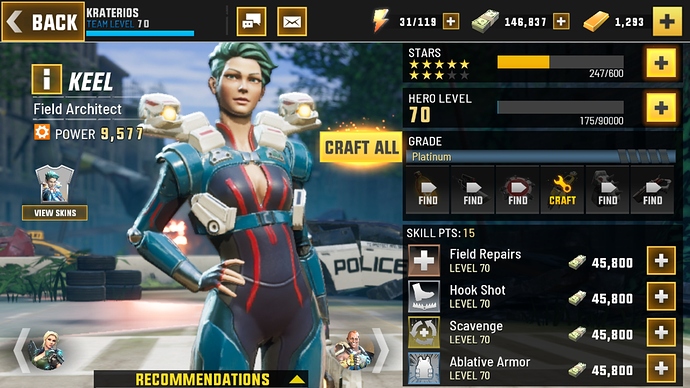 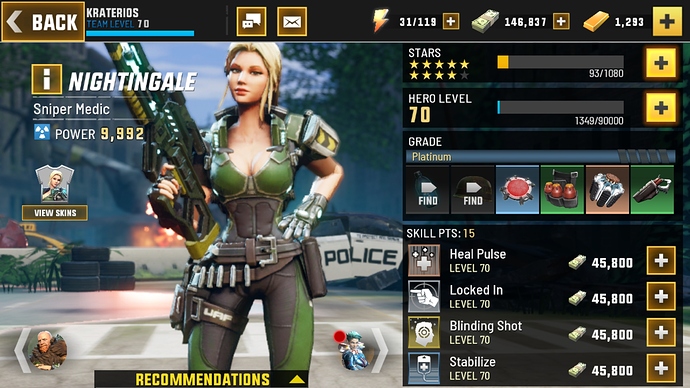 Power is primarily based on their actual statistics.

Then it’s probably better to allocate different point system for skills, instead of the fixed 6/9/12/15. This is probably one of the reasons why PVP is broken. Allocating higher points for plat skills is just wrong when it’s obvious that you just ran out of ideas and just added whatever in the plat skill slot as a placeholder. Some plat skill like additional armor, additional health, etc, can easily translate to base stats and would obviously result in lower power than what you would allocate it you used the fixed increments. Not to mention you give the same weight to some skill with additional HP to one character and to the entire team.

Why don’t you publicize the power calculation, just crowd source and let the players help in determining power calculation? I don’t see why you are afraid that it will be abused, it already is getting abused. Even if it does, at least you’ll know where it is since players will let you know.

Why don’t you publicize the power calculation

No offense, but isn’t that just the same as asking Coca-cola to release their formula so we can all improve it together?

I can understand why they don’t want to publicize their whole system, since it would make it easier to replicate.

But I agree that the skills having a fixed power is not the best way to do it, even more when the exact same skill can have different values (Operator’s plat and Oro’s plat are exactly the same, but Oro’s effect is stronger, yet both skill weight exactly the same for PvP).

The problems comes when valuing these skills. Should they give them a value based on the usefulness of the skill? Because that’s quite subjective, and two people may have totally different opinions of the value of a certain skill.

Should they be totally left out of the PvP matchmaking, making their power value just a number? That would make teams with lower skills be useless in PvP. I have 160 hearts per reset, but more than half have their skills at level 1. It’s not out of malice, to abuse the system. It’s just that I can’t afford them.

I think this is a hard problem to solve. They have tried a few changes, but I believe most of the times it just made it worse. But the fact that they are trying different things to fix this puzzle is good, in my opinion.

Going back to the hero power thing, while I agree that having every single hero with the same stats would be boring, maybe the differences between two heroes with the same gear, stars and level are too big.

A lv 70 10* plat Prophet has 15k power. A lv 70 10* plat Sentry has 11k power. If PvP punishes people for using unbalanced teams, that means I can’t use these two heroes together without fighting teams with more power than me, right?

No offense, but isn’t that just the same as asking Coca-cola to release their formula so we can all improve it together?

Not really. Power calculation is reversible. There are people who have put in the time to reverse it as you can see with how people abuse it. It’s somewhat a secret but not really. You can calculate how power increases based on stats if you just do increments and note the previous value. No harm in publicizing what can be reversed, just make it more available and put the resources to ways to counter abuse instead of making players figure this out on their own. It just gives more incentive to the abusers. At least with information public you negate their work.

The problems comes when valuing these skills. Should they give them a value based on the usefulness of the skill? Because that’s quite subjective, and two people may have totally different opinions of the value of a certain skill.

Subjectivity can be removed by numbers. There are quite a few ways to do it. 1) collecting user data 2) translating skills to dmg/sec, health/sec, buff/sec, debuff/s. Factor in cooldown, weigh in first cast vs average match duration. E.g. stagger is a debuff which can render a character useless for 2 - 3 seconds. Team health buff should be added to the base stats of the team instead of just the the skill holder with the rest of the team receiving less weight since it can be removed by killing the skill holder. Unblockable skills should have more weight than blockable ones. Disorient increases defense. Gammond’s gold skill should only have a weight 1% of flatline since it’s severely restricted, i’m sure they can take a stat of how much gammond’s skill activate versus flatline and make a reasonable weight allocation between the two. and so on. There’s no limit, only creativity and budget. If they have someone who can do ML, it’s an easy task to have a dynamic system that adjusts these values based on how matches go and team composition. I personally would git the hell out of it.