What are your favorite team compositions?

Going off a post by Spyro, I was curious to hear what team compositions you like to use (along with 3 emojis that describe your team, lol XD)

Even in PVP, this team has great synergy. With Kobold manned, she can use her initial shield to protect her team, who will take damage early on. Late game, her silver can be used quickly to dispense lots of damage via her gold passive skill. On top of it all, Kobold’s plat heals if she has a shield, which Castellan continually provides with his Shield Wall.

Overall, it makes for a hard to crack team that grows with strength. Hivemind is very reliant upon his drones/skills, which need to be upgraded. However, The drones and sentry can put incredible heat on a single target with no relief from shelter.

SET EM UP, KNOCK EM DOWN

This is probably my most successful team statistically, and will usually lose 1 hero every 6 games. The ability to take out individual heroes quickly is a strong deterrent against teams that rely too heavily upon one offensive hero. Despite being a dangerous hero, an enemy dogface can be impaired and taken out quickly. In addition, Flatline is elementally weak against Jarek, which means that she can be quickly dispatched if she doesn’t have a support.

Sentry, Mandrake, and Jarek provide a high amount of damage/stuns from all 3 elements (energy, bio, and mech respectively). To support, Butter and Halo offer good synergy with shields and healing. Many times, Halo’s first team heal will happen right after the last enemy is defeated, indicating a quick effectiveness.

Overall, this is a crazy-aggressive team that pulls a powerful punch. I use it most if I need to build up pvp wins. It’s not invulnerable, obviously, and can lose to more balanced teams. However, it’s proven lots of value to me personally.

There’s a lot going on in this team, and it makes for a risky team model. However, why I like this team is because of the ability to put a lot of mech damage onto one place, especially clutch energy heroes. Hardscope, when used patiently, can rack up tons of damage with his gold and plat skills combined. This means a sand-bagging Ronin runs a risk of getting taken out quickly (spelling certain death for a gutted team).

It doesn’t work all of the time, but it’s fun to utilize these characters in-tandem. Definitely worth a try!

While true in the fact that your 3rd team is lacking of supports, you might wanna try adding Caine (if you have him to Plat) since he raises your crit chance, giving a higher chance to activate Lifetap. Dogface has a high crit chance already, so no need. An extra weakness of your 3rd team is Razor himself. If you face a Gold/Plat Razor, do switch to operate Dogface since you wanna steer clear from him.

2nd team, it is a lot better in crowd control and confusion, also a very annoying team to deal with. Since Mandrake has that annoying Gold and Sentry with his staggers, true that you can deal damage to any element heroes. The weakness I see here is when you are dealing with Reviving teams (Ifrit and Flatline) and strong rear line mech heroes (Dogface, Hardscope, etc…). Savage is also a threat, especially if the other team consists of a Plat Halo.

1st team, a very strong team with Butter shielding, Mandrake’s invisibility, Castellan’s defences, Kobold’s healing and Hivemind’s harassing damage and survivability (This team is basically the symbol of teamwork). Though this team has a major flaw. Lack of disruptive abilities. Teams containing Bucket, Sentry, Min, basically heroes that have the ability to disrupt your heroes. Other than that, great team.

So the two teams I did tell you before, but my main is this:
Project: Demolition

Hero to pilot; Start w/ Baron and destroy half of the enemy cover, then switch to Scum. After launching both abilities, return to Baron and full-on barrage the enemy with Baron.

Strengths: Though Keel lost her spot in the meta due to nerfing her gold, she still earns a spot when Baron is in her team. She can keep the team going to a good amount of time until Cinder takes over. Taking advantage of her passives, you can boost her damage output by a ton (Trust me Vint, I fought the alliance leader, he/she still can’t beat this team). People think “Why the hell are we still adding Scum to the team?”. I’ve added him to the team since when paired with Halo, all hell breaks loose when both abilities are launched at the same target.

Weaknesses: The key here is not about the enemy’s team composition, it’s about who to take down first. First, people think “Baron is dangerous, I’ll take him down first.” NO. You do not take Baron down first. Your priority is to take down either Cinder or Keel, though you are better off taking Cinder down first. Don’t mind the fact that it is difficult to take it down, the main idea is that you do not let Cinder be a DPS while having the health of a Vanguard. 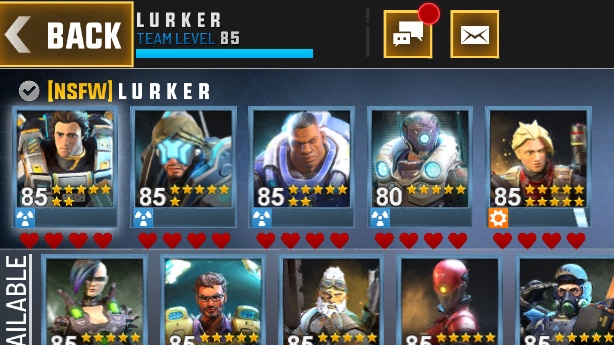 Strengths: drones everywhere. Then Butt shields the drones.
Weaknesses: relies on the A.I. being idiotic and hoping the enemy player is on autoplay. If this wasn’t such a min-max loser team, Hardscope and Halloway would be the main DPS (mostly Hardscope). 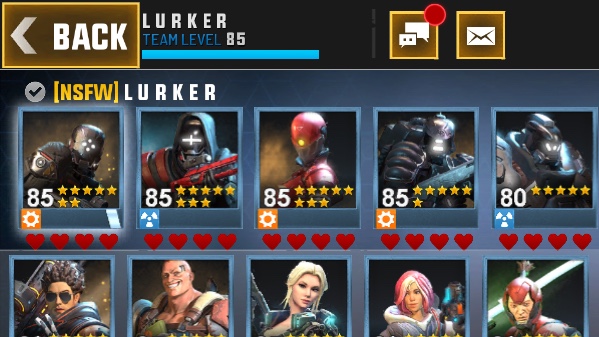 Strengths: being the meme team. Sentry deletes Biochems.
Weaknesses: despite technically being the same Faction storywise, they have little synergy. Kunoichi is squishy, and Operator doesn’t have the immense healing he had half-a-year ago.

@Spyro666 I actually agree with that weakness for Melting Point, and added it in, thx for the suggestion. And in Demolition, my instinct would be to go for Keel, then Halo. With them gone, no support means a weakened punch.

I actually don’t have Caine at all, not a single frag, lol

My main team is Maven, Heckler, Nightingale, Mandrake, Razorback all plat and at least 8*. It’s great for quickly killing enemy maven/dogface but I’ve found Heckler is a usually the first one targeted and gunned down quickly.

Tear down the wall

Strength: the team can take a tremendous amount of damage. Cinder will do 2 mil or higher. I’ve had her hit 5 mil once. Early protection from mandrake and healing from Keel. Matador shields very quickly.

Weakness: it takes a long time for the damage output to really take off. Butter is helpless in the early stage from hero’s like Dogface and Panzer. Most battles go close to time. Sandbagging Ronin teams can be very tough.

I control Madador first. All I do is shoot out the barriers for the first two clips. Then switch to Cinder and let the damage fly. After two clips you have taken out around 10 barriers. Since Cinders platinum is for all barriers you can expect it to be charged by 12 or more. By the end of the match she has over a million hit points.

I have one more composition, but it’s a composition I never want to use again.

I HATE YOU AND YOUR GUTS

Strengths: constant shielding, invisibility, healing, and resurrection.
Weaknesses: no damage, Flatline and Nightingale are incredibly squishy, and you gain +1 to dirtiness. Reliant on the enemy team being idiots and not focusing down the squishies.

Mauler, Ronin, Caine, Moss and either Matador or Gammond

Strengths: with the double crit bonus, Mauler can has a pretty decent shot at stun locking the main DPS on the other team, and if I can keep them from dealing damage or even kill them, the rest of the team has enough sustain and damage to win on their own. Having 2 pilotable DPS also gives me options for when the other team is heavily energy or even bio based, and I can switch over to Ronin.

Weaknesses: the team is largely built around getting Mauler’s stunlock to go, so if it doesn’t happen, it’s all over. I also lose a lot to Ronin teams because I don’t have the elemental matchup in my favor. Full support teams with a Castellan DPS are also a problem since I don’t have the overwhelming damage of a min-maxed Ronin. Two DPS builds also kill some guys since I can only stunlock one DPS at a time, and the rest of the team is low on sustain.

Colonel Wesson, Matador, Mandrake, Butter & Flatline
Pilot Col.Wesson to focus damage on the enemy targets.
Matador & Butter is an amazing support for the team ( Shielding & healing)
Flatline & Mandrake is good for keeping your heroes alive
Weakness points: having only 1 dps hero with 4 support heroes is a disadvantage in the match

You know all but the Rifleman and Vanguard are female, right?

Wait, really?
I never knew, just assumed they were male (not being sexist)

Naw dog, the only one that is female is the technician and Kuno, everyone else is male.

I dont see the DPS anywhere

Boy, what? Kunoichi’s the only female there. Unless, you know, Sentry and Operator are using hella voice mods in their helmets…

Saying keel lost her spot in the meta?? She got one of the highest hps of the healers atm she is still meta for sure

She hasn’t lost it, but she ain’t getting as much love as she used to get

I dont know how to post pictures yet, but heres one i use.

All the heros are built to both support and boost kunos damage output. Might not be practical, but i think its fun. Must pilot kuno to make the most of this, but there are alot of opportunities to use her gold skill. On paper, at least.

For me the only problem is that my bucket is significantly weaker than everyone else so flat cant save kuno when needed. Oh, and people target flatline alot, so the team falls apart since bucket cant carry her own weight.