WAR what is good for 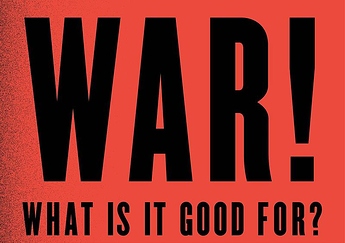 WAR! WHAT IS GOOD FOR?

I love Hero Hunters, but the worst part about it, is War. Why? I believe it’s
because in our busy day to day lives EVERYBODY wants instant gratification.
(except for me… it takes too long)

Just in my own experience, asking friends through HH PMs whether or not
they like War or not, out of the 20-30ish replies, no one said they liked it. In
all honesty Every Single Player said they Hate it, Not Disliked it, but Hate it.

My thoughts: War is not fun when you spend 30 min

trying to figure out
the most efficient way to spend your attack points & where exactly to place
defenders & a;lksdlksdksljf;lk!!!

(getting frustrated just thinking about it)
After all these careful long thought out decisions are made & feel like you
made an amazing difference, come to find out your alliance is no longer in
first place, but last… It’s like playing chess when you’re very good at, but
you only get a turn after everyone else in your alliance gets a turn, then by
the time your turn comes back around the other team has stolen your
Queen

Pawns are scattered all over the floor & on fire

then you find
out you stepped in dog poop

& tracked it all over the house…
(Geez, I didn’t think this would turn into a rant… I guess I dislike war more
than I thought)

QUESTION: War bites, it doesn’t need to be removed, but improved, do you agree?

What do we want the dev to improved it?

Edit: there were already several topic about this AW…
Some just said its no fun…
The other want a new bracket to open…
Some want more reward…
Another wanna fix the chat/ server so there’s no lag when resetting…
And some opinion about rolling the reset time for AW so every timezone turn covered when the AW starts…

@TrialZee I’m sure many things have been said about AW but I know these things for sure…fixing chat and lag has nothing to do with AW’s mechanics. It’s like saying you want your left hand to not be broken so you can write with your right hand better. And the “rolling the reset time”? This has been covered so many times………if you change the start / end time of any event you have to adjust all the others that start / end in conjunction with the event you want to “roll” around…or have overlapping events…which I definitely don’t want.

The polls show otherwise. People not on this forum HATE wars, and that’s an understatement. It’s not interactive at all, and wastes so much time. If there are two equally matched competitive alliances, it’s basically a back and forth.
You don’t have to agree, or you may love wars, but majority of people feel something should be done.
A concerned hunter

I did not at any time dispute the poll results thus far. I was merely pointing out that 1. I think AW is fun but I also think it could use some re-working and therefor I can’t really answer the poll one way or another…so I went with disagree because I disagree with the poll statement more than I agree with it.

Hmm, I never implied that you disputed the poll results. If you feel wars need improvements we are on the same page, if you don’t, well…
Also, from your number 2, you said it is fun, I know it’s your opinion, but how?

Besides, if a majority feels it needs improvements, don’t you feel they have more of a point than you?

It might be fun for you, but it’s boring for majority, and that’s what matters.

What?! Did you seriously just say that the majority opinion invalidates my opinion? Wow…

I do agree that AW needs improvements. But the question said “War bites, it doesn’t need to be removed, but improved, do you agree?”
That wasn’t exactly asking if u hate it or not lol.

Anyway, maybe u need guidance. @GIR said that in ur last post. And I completely agree. I’m also an alliance leader. I made my alliance, Alpha Helix 1, less than a month ago and we’re top 10 in war. Wasn’t any miracle, I put in the effort to get where I am…
Sure, war is no fun if u lose. If u put in the time and effort though, it pays off. Just my opinion.

One of the biggest things id like to see changed is on the social level. You put us 6 on a small map with all independent scores and expect everyone to play nice. Only one can get first and the rest have to settle. This breeds bad gameplay and toxic situations. Alliances lie cheat and down right betray you to get ahead. It takes a long time before you know who to trust and who to fight even the ones you trust you know is in it to win it like you. Was it designed this way? Did you want us to be social and get to know each other or wanted wars to be chaotic and deceitful?
I think making a 3v3 alliance wars would be better. 3 alliances make a team and share the score and prizes. It would be one big war! We would all be working together and be a united front. Split the map in half and make the start points the same. 2 colors. 2 scores. 1 war. 6 alliances. Team only war chats. Etc
In my opinion it would make the social aspect of war more pleasurable and will promote team work amongst alliances. This will stop the betrayals, deceit and general BS we all deal with on a weekly basis. At the very least make wars anonymous. This way we are free for all and can just be chaos. Lol

the only problem I see with a 3v3 is…….man I hope my alliance doesn’t get paired with two inactive alliances.

We would pick our teams. Alliances that work well together love seeing each other in wars. Why not just let us play with who we want to and fight together. There will be no gang ups. There will be no rat race for top 3. There will be no betrayal and dirty tactics. There isnt a doubt in my mind that this wouldnt better the war experience both on the social and gaming level for AW.

I have several doubts and design concerns about allowing official team ups, but I’ll pass your feedback along to the team. Thanks!

Oh, the fact I said I disliked it doesn’t mean I want it removed. It may mean it needs improvements, kind of a very simple statement. Honestly, I feel the same people keep popping up in the comment section to repeat the same thing.
My alliance does an awesome job in wars, ranking as the third for a very new alliance is not shabby imo. Jumping into conclusions is kind of weird, a large portion of the votes clearly show something needs to be done,can you leave it at that? If we needed guidance, I’m pretty sure I’ll know, maybe you should keep that opinion to yourself.
Something needs to be done to improve wars, stop going around with your peeps to say otherwise

It’s hard to speak to what the majority wants when you don’t have all of the data.

Thanks for providing your feedback on what you would like to see from War. I’ll be sure to pass it along to the rest of the team.

Thank! My data was from the poll​:sweat_smile:

The opinion of the majority holds more weight, but does not invalidate his opinion.

I think war should never end. The rewards will come in waves like seasons. New maps. The war maps boundaries touch other cities maps of current alliance wars. You don’t know who is on the borders or who is in your city map. Allegiances with other alliances are necessary, ongoing, as you progress not only to center, but to the borders. When time limits are up, it’s like the current war ends, but you move to the next city map. As time goes on, your global war map expands visibility and you can see previous maps and which alliances are occupying the highest point zones. Then alliances could coordinate across maps with others, to move over weeks time, towards the same goal. With no beginning and end, war strategy would take less time, and less stress.

It doesn’t, but as you said, it holds more weight

War seems good and fun. I am in a alliance where I can’t do much as my power is low. And I am on last bracket. But my top 5 are around 40k and the klg teams are 90-100k. Basically I can’t even take those and I knew that from beginning when I joined this alliance. But I do help. Sometimes with making allies and mostly telling others for event heroes on zones that don’t have one. Basically the office work

. Through my 50 days in this game I’ve seen that when they surprise attack you and they just cut your supply your points reduces because of that. As it may look not a nice feeling an enemy gets your castle without putting the walls down. My idea is to improve or remove surprise attack. My opinion. But in general to me looks pretty dope alliance wars for me as I get top rank rewards thanks to my friendly fire team. And they being patience with my power. Much love