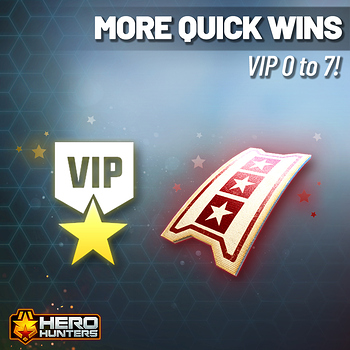 Listed below are the new Daily Quick Win allowances for VIP levels:

Congratulations all who are affected by this! Daily Quick Wins Tickets are AWESOME.

Will thanks for the qiuck wins for vip-0
When i first saw it
i thought there is something wrong and the game will give me “disychronized from our server” and reboot
So after taking it i waited couple of minutes to
auto-reboot the game and you claim back what is not mine. LOL

Does this mean you will be reducing their availability elsewhere

Could you please also increase the stamina

THIS would solve lots of probelms.

Is there a likelihood that we who have many quick victory tickets can at some point be redeemed for something?

That’s why I’ve been getting quick win tickets, I thought it was a glicth I messaged support and everything

Tylerdude, if there was a feature like that it would kind of displace quick win tickets, and a store for something that you don’t work for?

As a VIP 5 I went from always running out of quick-win tix or being on the edge of running out, to having about 1,200 (and growing fast) in surplus since this change went into effect. Don’t get me wrong, I’d much rather have too many and not need them than need them and not have them but man, that pendulum really swung hard the other way. If they are going to make it so that it’s almost impossible for anyone to run out, I’d really like to see them either remove or greatly reduce the probability of getting them from PvP crates.

And NOT just by increasing the likelihood of getting XP. That’d just be straight-trolling by HHG

I totally feel you. Went from hovering at 100 to 1250 in less than a week. More tickets are totally cool and good, but sometimes when you open PVP crates and look at another 20 added to your inventory, you wish there’s something you can do with it considering that energy generates much slower.

Honestly, at this point I doubt you’ll see many players, if any, starving for quick-win tickets. With so many other currencies and materials in the game, they ought to just get rid of quick win tickets entirely. Players are already capped with how much they can farm due to Stamina, why have a pointless quick-win ticket economy on top of it?

We’ve taken a look at Quick Win Tickets in the PvP Crate for the next update. as a whole you should see less of them coming from the Crate.

Is there a way you could increase the stamina limit or let vip players receive extra stamina every day? That would be really helpful.