Since we announced the July 2019 Update, we’ve received a lot of feedback regarding PvP prizes of all kinds. We want to take a few moments to address your concerns and let you know what’s going on.

Some of you noticed that the reward payouts for this week’s PvP Tournament looked a little low. That was due to a few factors:

NOTE: This refers specifically to the PvP Crates you earn for winning five PvP matches, not the similarly-named Tiered Crates.

Many of you pointed out that the payouts for the PvP Crates, in particular the gold payouts, had lowered with the July update.

Good news! That’s a bug. Due to changes in the Bracket calculation method, every player is seeing and being awarded the lowest Bracket prizes. We can fix that, and we intend to.

Bad news! It might take some time, as we’re still investigating what work will be necessary to solve the problem.

More good news! We’ll be sending out a compensation package to all players, to make up for this once the issue has been corrected. Keep your eyes on your inboxes.

Thanks for your feedback and support!

Love the quick communication and you regarded some of the big complaints here. Nice work Muninn!

See, everyone…
It wasn’t the end of the world this time either.

While I appreciate your forthcoming and getting out ahead of the problem, I’m still left wondering “why?”

I, and a whole lot of other people, are getting a drastic lowering of rewards for much more effort in PvP.

For instance, I could place 1st place in my bracket (hours upon hours of grinding) and still get less of a reward than I previously got with three matches. Where is the incentive to put in that time? I would suggest the same rewards for all the brackets, that way no one is getting screwed over and if you want first place for the highest rewards then you can still strive for it.

EDIT: now that they have updated the rewards, it makes more sense, and I can live with the changes.

Thanks for the communication. Again, I may not like things going on, but more often than not you guys make it right. I’ll also mention that I’m not upset about the new setup of brackets. It’s about time players that have put in the time/effort/money be compensated more than those who don’t; and I’m saying this as someone who will earn less rewards as things stand now. All too often it appears those who spend most are expected to spend more than those who don’t; IMO this should be welcomed change. I have a couple questions that I believe are relevant.

Glad they are adjusting the awards hopefully back to the way they should but saying that because brackets changed we would see lower rewards most the brackets have lower rewards the the lowest tier in pvp before.

Really? You normalized the rewards to 1.25M - 1.5M bracket? And those below that bracket will get lesser rewards? Thats too much

really thank you for changing in pvp rewards developers.

Thanks for the fix …

The event rewards have been updated but the pvp crates remains untouched, I still receive 3 frags and so on. Please fix this
Ps. I am on Android

Be patient! Fix is coming, just not right away.

It might take some time, as we’re still investigating what work will be necessary to solve the problem.

Thank you devs for changing it back to what we used to earn. However, i think it might be some kind of error…because right now the reward change back like the photo i attached. In the morning i saw i can get frags 125 drake and 125 caine. Just anfeedback though 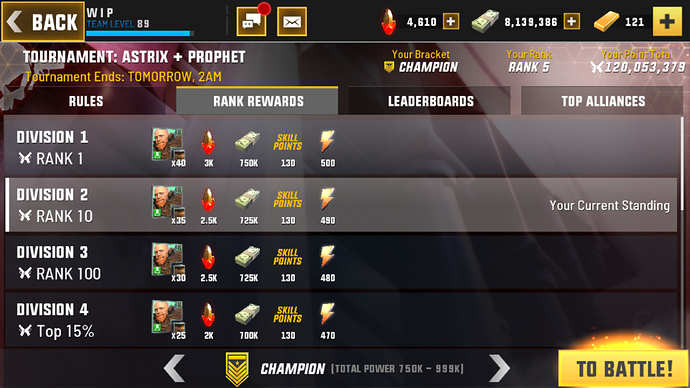 Yes agreed rewards in pvp went back to the way they were when this event started. Yer not the only one seeing this. Hopefully they will get it fixed again.

Thanks for the reports everyone! We’ll look into it.

Should be fixed now! Reboot your devices!