Additional changes are coming to Alliance Wars, based on your feedback! Look for these updates on July 17th, 2019!

Select Platinum Gear items will now be worth more when converting them to War Coins to better reflect their rarity and value.

We’ve heard you! The Defense Bonus players get from being close to their HQ has been reduced across the board.

We’ve resolved an issue that caused Scouts to be removed from adjacent Sectors when you capture a Sector. This means you can still Surprise Attack a connected Sector if you have a Scout there.

Additionally, you can now Scout any Sector that you’re currently not able to attack! This opens up Surprise Attack opportunities for you to explore.

We’ve received your reports about Sectors not updating, or the War map appearing different for different users. We’ve ruled out server-side causes, and are continuing to investigate what may be causing these issues to appear for certain users. We’ll provide updates when we have them.


Look forward to these changes in time for the next War on July 17th, 2019! All details and times are subject to change

Still no better rewards?? Wow this is sad i think im about done now war was the only reason i was gonna stick around

Here is food with ants on it. It’s way better than yesterday’s food with maggots on it.

Thank you for your generous portions sir.

Thank you so much

Thank you for lowering the defense bonus. It was way too high. You can get through them using sheer luck and the fighting chance but the effort was insane. As for the performance investigation please fix this issue asap. As a commander it is hard to call out orders and my guys cant even see who is attacking us. Lol the map needs to be instantly updated with every change to ensure a proper fight. Also on a side note i would like to see maps that are a little bigger. I miss the days when the first day was setting up and making pacts.

Thank you for lowering those HQ bonuses…they completely stalled everything. I’m only 226k total power how was I able to beat a team of 5 that had 246k power…lol

Thanks for the update!

Also on everyone’s minds… can we please have a bigger map, with fewer chokepoints?

These small changes won’t make a big difference unless the rewards are changed.
Update shanks ad well! He is garbage for bounty. No Dps at all.

Also in the chat options, put the ability to turn off chat pips for war channel. It’s very annoying to see if there is is an important messages only to find out someone is talking on the useless channel.

there is and always has been that ability since war room was introduced. its in the game options

Thnx for addressing a few of our complaints. There’s still more the devs need to look at, but I appreciate our voices being heard. I hope the issue with loading screen on AW gets fixed soon, for that’s the most important one IMO.

mikejones there isn’t, it’s in the for toasts and chat previews but not chat pips. You do know what I’m talking about do you? It’s the red dot appears when you have a new message in chat when not in chat.

I don’t think it’s never been there.

so you’re complaining about a red dot?

The devs just take the piss out of you when you complain about a red dot these days haha, last time someone mentioned it I believe there was a threat to turn it into a rainbow rave dot.

Also in the chat options, put the ability to turn off chat pips for war channel.

there is and always has been that ability since war room was introduced. its in the game options … you certainly mean in the chat options, this option does not exist 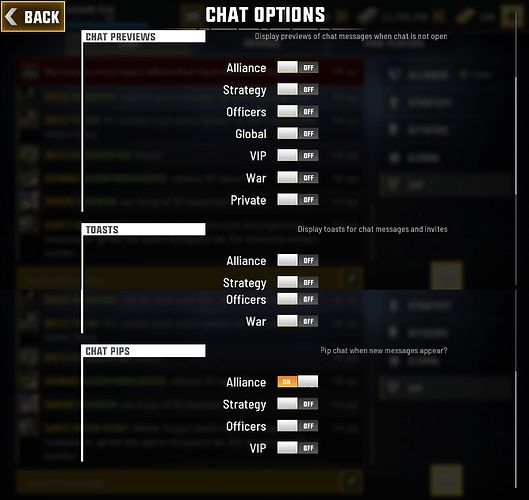 As you can see I am not a friend of chats. So if I see the red dot, I think it’s something in the Alliance … but no, it’s chat during the war.

War channel is very buggy, for example I use 2 accounts on my phone for the game sometimes when I am in my other account it still shows messages coming through from ‘UnknownPlayer’ but when I click on them they aren’t there. This is because they are actually messages in the war channel on my other account. Bugs suck and the the red-dot-o-death can be annoying but idk if there is a way or if there ever will be a way to turn off notifications completely.

At the end of the day it’s an online game involving multiple people and cooperation between people so HHG won’t want you to be isolationist and probably won’t give the option to turn off chats because they want you to take part.

They have the options to turn off other things for the war channel, adding the option forthe chat pip isn’t going to break down all social barriers and create mass anarchy, hell it might even improve it. The war channel is about as useful as a condom stall in a nun convent.

Don’t show any notification of who you are fighting in war. No looking up what top team they have so you can block them. No constant talking with other alliance’s. Let’s just fight. It’s far too time consuming as it is

How about you have skin tokens convertible. I need more skin tokens but i know a lot of people have a bunch they can’t use. Just stopping giving them away was a bit of a drastic m9ve.

As we mentioned, they’re not going away! You’ll have chances to get them soon.