I’m not one for nerfs, the characters in the game are fine some may even need to be buffed but PvP needs to be reworked, I’ve been playing co-op PvP and I keep getting matched up with ruby heroes, I’m level 94, my hero power was 39k plus and my PvP partner was around 41k neither of us had ruby heroes, so why are we getting matched up with teams that have double ruby and over 50k in power. Either a next tier needs to be provided or match making needs to be sorted so similar power levels match up.

I have been matched up many times unfairly specially in co-op pvp, where the opponent team is way powerful than mine like 10k-30k higher power

Lol what!!! That is not balance, balance is same level and same amount of bars or no bars between characters

Pray that system sends u bots & then, u’ll not complain if u just need easy wins & rewards.

You say use balanced teams and some say power levels don’t matter but how can the balance be ok if me a level 94 and the other person I’m playing with are both being pitied against players that have double rubies in their team and the next person they are playing with has higher level heroes plus full 6 bars, added together the total power is 20k or more at times, you might be lucky to take out one ruby hero but most likely you are down 3-4 seconds in th That is not balanced, that will just make people not bother playing the game. 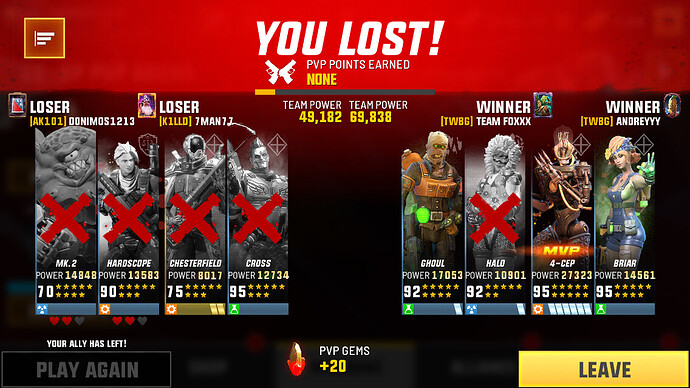 yeah im pretty sure that this aint fair, I got mismatched so badly it hurts

I said?.. I read my comment again…Some key words of that comment are : “What Some players said” & “they meant”!

I had to re-read what you said, didn’t understand you the first time.

PVP is a very unfair game, I am currently lvl 98, and many times they match me with lvl 94 players, it is very easy to win them because my heroes are already ruby, and that is very unfair, the pvp needs some adjustments, since this System is wrong, but the most unfair is 2v2, there are players of lvl 90-, who pair them with players 95+. this is not funny at all, for lvl95- players. and your intention is to improve your way of playing pvp, and they match you with ruby ​​players, where you can’t even put your hands to defend yourself, #PVP NEEDS TO IMPROVE, I SUGGEST IN EACH UPDATE TO MAKE SOME ADJUSTMENTS, MAYBE SO WE WILL HAVE A FAIR GAME FOR ALL.