Here is some feedback I’d like to share and get some other opinions on.
I find it very frustrating that most Factions have an unbalanced distribution of element classes within them.

Based on my experiences these last months, this has brought up two major annoyances for me, and I’m sure I’m not alone:

Having to upgrade 6 Bio-chem heroes is quite tedious without spending Gold when Bio-Chem canisters are limited, and a huge grind. It would be so much nicer to have a more equal distribution of classes to ease the process of upgrading heroes, rather than being dependent on only 1 type of canister. An even distribution of classes for instance, 2 Mech, 3 Bio, 2 Energy, wouldn’t cause any dependency on a single canister type.

Another annoyance for me is the effect this has on the distribution of Bounty elemental classes.
During the Patriots month, 99% of the available bounties were Mech, since nobody wants to hit a bounty with a class disadvantage. 5 bonused Energy heroes made Bio-Chem hero bounties virtually nonexistent since they would get destroyed the second they would appear.

Similarly, UAF & UAFA month, 99% of all bounties were Mech for the same reasons (no Bio Chem bonus hero).

In my opinion, Factions should have a more even distribution of elemental classes in order to balance out upgrading our heroes, as well as Bounty targeting.

Great post and completely agreed. The issue is compounded by the fact that we have faction-specific events in the mix too. When you’re limited to essentially one element for your entire team, it really limits how much strategy can go into a match.

Great point @Papa_Marsh
Having members of a Faction synergize with each other would be great for events, especially PvP, as well as the overall objective of their entire concept, but that’s another thing that can’t really happen to its fullest extent when 1 element type dominates the entire Faction.

Totally agree. Another issue, at least for me, is I can’t really make any progress on other characters I want during all these events. They pretty much force you to focus on the hero of the month, either Panzer last month, or Ifrit this month since they get such huge bonuses during bounties and PVP.

I’m all for focusing on specific, under-used heroes to bring them into the spotlight for a month, but the bonuses for the new characters is too much imo (especially considering they have been OP even without bonuses).

Why not have a faction of the month and have ALL heroes in it receive the same bonuses? That way if I would rather focus on Mavin or Heimlock instead of Ifrit, I am not at a huge disadvantage? Or maybe even allow you to pick one hero yourself that you want to focus on and gets bonuses?

I still think Ifrit is going to be quite bad at bounty hunting so I’ve put love into Maven for the first time since 2 months back. I didn’t get her to Platinum yet but I’ll get there before the next round of Morlocks themed bounty hunting. I send you a pizza if super-boosted Ifrit does more damage than boosted Maven!

Mavens Bronze is doing 25k Bio damage per second at 10* Platinum. Its active for 8 seconds resulting in 200k damage. Multiply it with six because of the bonus and then with two, because of the elemantel advatage it adds up to 5 million damage done by her bronze alone. There is no way irfit gets near to it, if you add Mavens much higher Dps to it

That is true, but it is only part of it. Ifrit is worth 15x points in PVP while Maven is only worth 5x. Ifrit is also significantly better in PVP than squishy Maven.

I kept talking about Bounties here but the topic changed to PVP so I now edit my post into oblivion.

But agreed, I don’t think ifrit will hit that hard, his silver can give a nice damage boost with the multiplier, and his gun will give decent damage, kinda like flatline, was better then a normal hero but not a game changer in the bounty

I’m with you on maven for the bounty choice

No, it is 6x and 8x. The new character is 2x higher across the board 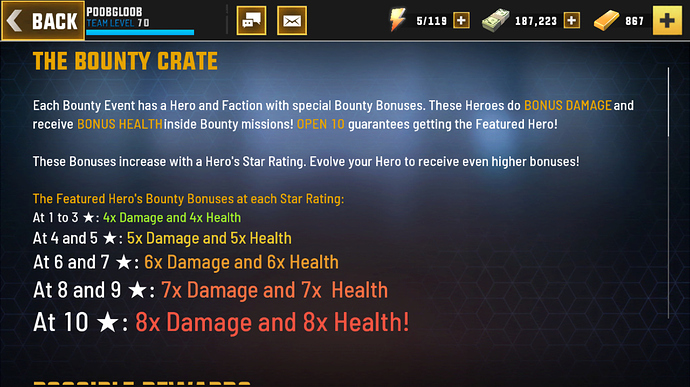 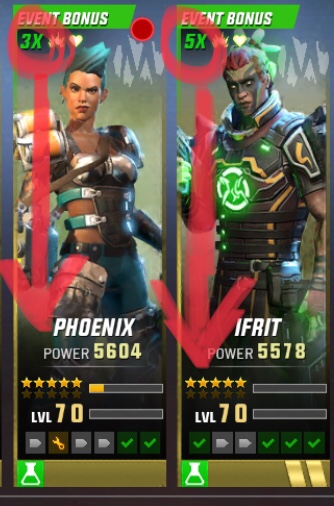 Yeah, non-featured heroes of the Faction will have 2x less than featured hero (Ifrit) according to stars.
So 10* Ifrit will be 8x Damage, and 10* Maven will be 6x Damage.

Ya, Ifrit will have 2x more multiplier for bounties, but I am sure he will still do less damage than Maven (since she is DPS and he a healer after all…).

However, Ifrit is great in PVP while Maven is mediocre at best. I think that gives Ifrit the leg up and makes him the clear choice here?

I agree with you Death,
I feel, however, we all are getting somewhat off-topic.

With 6 Bio-chem Bonused heroes (and 1 mech) I am predicting a huge imbalance in the available bounty elemental classes to choose from. I will be posting screenshots of this during Bounty event.

With 6 Bio-chem Bonused heroes (and 1 mech) I am predicting a huge imbalance in the available bounty elemental classes to choose from. I will be posting screenshots of this during Bounty event.

Yup, already seeing this after only a few hours. the only mech that last in my Alliance are the really high level ones. The rest get smoked almost immediately after showing up. Right now we have 3 mech, 6 bio, and 11 energy bounties going.