I was taking a gander through our entire hero roster, and realized we have exactly zero Biochem characters that utilize drones/turrets/machines. Due to my dream to create a team based off filling the level with said drones, I drafted up two concept characters to fill those slots in our roster.

Provided anyone can actually stomach the disgustingly apparent lack of artistic skills I have and Hothead would consider fully fleshing out these concepts, I am 100% okay with them using my ideas for the game. I’m not stupid enough to think that these half-arsed drawings are worth any sort of repayment, and simply seeing something based on my concepts enter the game would be far better than any sort of payment. 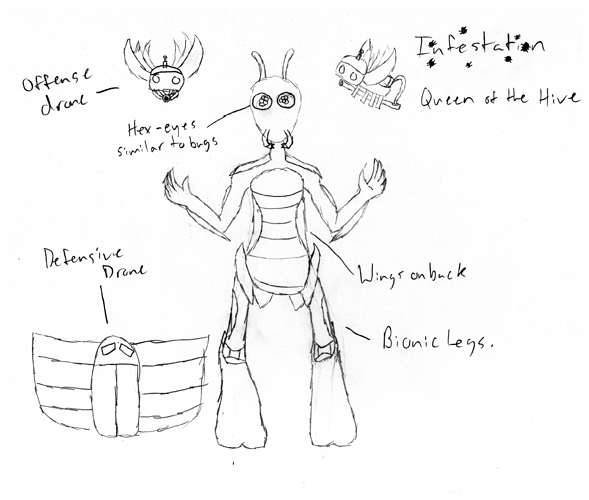 Bronze: [INSECT DRONE] Infestation builds an insect drone. Each insect drone fires darts that deal XXXX Biochem damage at enemy targets. Infestation may have XX drones on the field at a time.
Silver: [DEFEND THE HIVE] For the next XX amount of seconds, each unit on the field dealing damage will generate a shield equal to the damage they are dealing. The shield persists until destroyed, or this ability is activated again.
Gold: [EXOSKELETON] Whenever cover is destroyed, Infestation’s nearest drone will move to replace it, landing on the ground and transforming into protective cover. (POTENTIAL BALANCING OPTION: This drone can either still count towards Infestation’s maximum amount of drones, which will stop her from continually producing offense drones who turn into defensive cover and then drop off of her total. Or, she may have a total of XX defensive drones separately counted from offense drones. Either way, I would not suggest giving her more than 3 defensive drones at a time, and I would certainly not make the offense to defense transformation instantaneous.)
Platinum: [PROTECTIVE CARAPACE] Tiny bugs will shield allies and herself when they move between cover for XXXX damage. This shield cannot trigger on the same target within XX seconds after being applied. This will persist until destroyed, and will stack with [DEFEND THE HIVE].

While designing Infestation, my primary goal was to make a drone utilizing Biochem, and my secondary goal was to look for other places the Biochem line needed expansion in. Modifying cover and shielding allies are two lesser utilized skill sets in the Biochem lineup, so I worked on those for her skills. Midway through drawing the character I realized I was not going to be able to draw human legs the way I wanted, and switched to bionic legs. This isn’t a necessity, but gives the opportunity to diversify the cast into including an amputee character, or an actual robot character for the biochem lineup, and was more of just an afterthought. 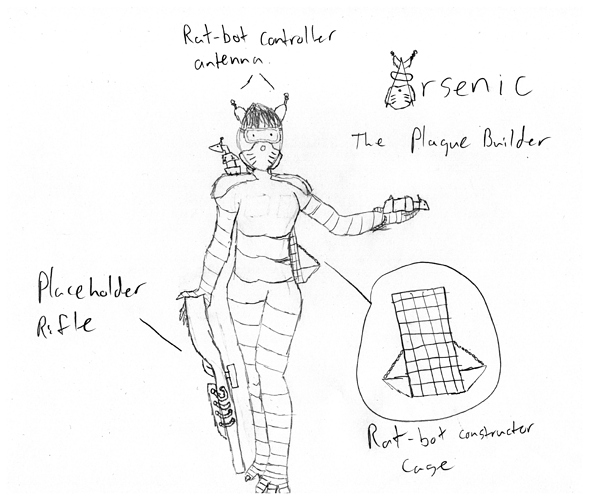 Bronze: [BIOCHEM BOOSTERS] Constructs a rat bot with XXXX hp that will run along the top of cover. Rat bots will stand close to heroes and provide additional protective cover to allies. While a rat bot is on the piece of cover a hero is using, the hero will have XXXX Biochem damage added to their attacks. XX bots may be active at one time.
Silver: [ANTIBIOTIC ASSISTANTS] Rat bots release a healing pulse that heal allies for XXXX in the vicinity of each rat. For each rat bot on the field, the healing power is increased.
Gold: [PERSISTANT PESTS] When a rat bot is destroyed, Arsenic’s [BIOCHEM BOOSTERS] skill will be filled by XX%. If this would cause the skill to go over 100%, a new rat is immediately generated.
Platinum: [RAT RACE] Rat bots will move to repair cover when it is damaged.

My goal while designing Arsenic changed midway through conceptualization. I was originally working on the angle of a Plague Doctor, which would be cool but I felt didn’t mesh as well with modernizing the character and would clash with the overall design that Hero Hunters follows. Using actual rats instead of rat bots could have made the Plague Doctor a more viable fit, but then we have to worry about PETA complaining about such an addition. Instead I moved to a more exterminator type of design, along with armor designed to look more like the rodent her bots are modeled after. I then conceptualized her with twin pigtails, but noticed recently released Artemis had already grabbed that look. Although it’s not noted in the image, I was considering a long ponytail (like a rat’s tail) or perhaps short hair, while putting an robotic rat tail or something connected to her armor.

Anyway, these are my two concepts to try and fill out our roster. I have no idea if this post will look terrible or not, I don’t seem to have a “Preview Topic” button. Please leave feedback and questions, I will keep an eye on this thread and do my best to reply quickly. Thanks!

these guys are awesome

GASP A reply! and a positive one!

My existence has been validated, I was so sure this post was just going to get BURIED without a single reply.

Thanks Gruff, but you’re the one who is actually awesome.

Some really good stuff in here. It is clear to me that you’ve spent a long time on both of these Heroes.

The creativity is pretty outstanding. I really like your adheration to establish mechanics in-game. As well as listing balancing concerns, along with potential solutions. Great job with both of these concepts.

Thank you for visiting my thread and showering praise upon a lowly peasant such as myself. Truly a kind and generous (Omnipotent) god.

I’ve always looked at character designs in games and tried to conceive characters to better round out the rosters, but they usually get buried on other game forums without anyone seeing them.

Thanks again for the reply! Hopefully I’ll be able to improve my art skills and post more concepts in the future, I’ve been thoroughly enjoying Hero Hunters as it is. It seems to be fairly well balanced and designed, and despite not opening my own wallet, I make sure to watch every advertisement I can to help support the game. That was a fantastic idea and a wonderful solution to F2P games usually needing Pay2Win mechanics.

Anyway thanks again, again. You guys keep up the good work!

I also love the rat bot controller antenna, and your reply.

I’m not sure if the bots themselves should only have one antenna, or if they should have two like ears. I think one would really make them look more like bots, two would look more like rats… So I drew them at an angle that leaves it up to interpretation