To developers. Please make somehow alliance wars not teaming up

I have one request for developers. Please make sure you try and fix teaming up in alliance wars. Is not enjoyable when 3 alliances team up against you. And we only hold our base but somehow we made it possible to be first on our map. Without even having the center. Now half way of the war 3 alliances teaming up and specially when all those 3 are higher power then us and actually we are lower then then all the other 5 but still we are first. Now after teaming up probably we will lose. And I am not worried about being first in our map but on leaderboard. And alliances are teaming up to be first in the map even though they will split points which on the leaderboard won’t be as great as having all on your own. 3 teaming up against us is not on. And this is happening all the time. So please developers are you doing something so every alliance does it on their own as far as now I am hating alliance wars and when this will happen to many alliances I am sure they will feel the same.

Maybe your crying on other thread painted a target on you

How can they possibly force alliances to not agree to work together? Make it so they can only attack somebody so many times? It is completely beyond the developers control whom people attack and whom they don’t.

Sounds like those alliances are definitely cheaters too. Hopefully you called them all out for cheating in chat so they realize they are bad people and stop taking advantage of the concept of alliances and diplomacy. If they are anything like me, they will bow down to you and realize that diplomacy is for the weak and realize the sins of their ways and give you back the spot you deserve at the top of your throne.

I am sure the developers can make something that you won’t see which alliances you have on your map. Let’s say make like blank names or anything like that. Being the lowest alliance power in the map and having them teaming up and we only was on our base is not cool. 3vs1. And that’s fine what they doing. Only showing true colours. But what I am saying is for the developers to try and sort this out in some how. Is the third war we are having this and is frustrating and not playable. I am sure once it will happen often to some alliances they will not play. We had for the second time in the row 2 exact alliances. And I know one of them has gave up in that game mode. Is horrible

No, they absolutely should not do anything about Alliances teaming up because that would make no sense. What is the point of restricting what Alliances do in the Alliance War? If winning means teaming up to eat a weaker Alliance alive, then so be it.

Why would the dev’s “try and sort this out some how?” This is the point of the War: devour other Alliances until your Alliance is at the top. If the mode is unplayable, then sh-t you’re outta luck. Better luck next time, I suppose.

Look, I might sound elitist, but what you’re proposing does not make sense in the slightest.

An Alliance Vs. Alliance mode but like you can’t team up or target weaker Alliances first. 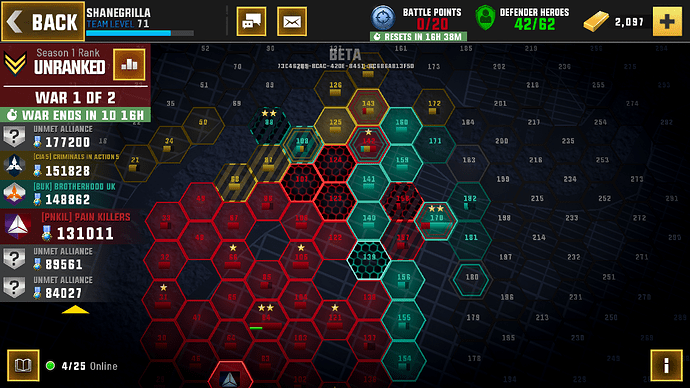 Dude - don’t disrespect my brilliant friend like that. Let’s take a historical perspective on this matter so you guys understand where he’s coming from and why the developers need to fix this.

Napoleon - dude was decimating Europe and making his way into Asia. His army and tactics were far superior and then those cheating brits came in and started chatting it up with the other Europeans and Russia and turned against the great Napoleon and beat him back. Those pricks cheated and Napoleon shoulda have won if they didn’t talk to each other.

WW2 - Hitler would have had his own merry way with the world if those cheating bastards in the US, UK, and Russia didn’t cheat and start talking to each other to beat back the dominant Nazi forces. Mind you, Hitler cheated a bit by working with the Italians and Japanese but that’s just semantics. We don’t like when the dominated team up against the dominators. They are flat out cheaters. Hitler shoulda been like “Hey sweet baby Jesus - please tell the brits and yankees that they are cheating and they should only fight us one on one. This whole working together is for the birds”.

I already see an alliance that has gave up on alliance wars. Because on both occasions others have teamed up and I see they not even trying with the power they have. Is impossible if 3 alliances goes against one. You don’t have enough battle points to keep up. And then if I am honest if it will happen to us often I am sure I will not play alliance wars for much longer. But then where does it leaves the game. And like my alliance it will happen to many others. And what will be left happening to them and then you will have none to even try playing. It does requires a lot of time as it is let alone when they team up. Needs a lot of time in that. And I am not saying that once in a while you will get attacked from both sides but a cordination from 3 and not attacking each other that’s horrible. Anyway I am sure this way many will not even play at all later on if this keeps going on. We did not had the center where the points are. We were only on our base but we were going strong for the first spot. And they didn’t attacked us for points but to weaken us. We were far out from them. Is just not on. But anyway that’s your thoughts

How did I disrespect your friend. If you don’t like it leave the chat and let the developers to see and answer this. Is none of your business unless you are a b of HH

I get it. So then, if I don’t know how Alliance Wars work, how then does it work?

Edit: no disrespect, of course.

Cool, awesome. ‘Cause I just checked and I’m in a war where one Alliance is going absolutely nuts across the map. 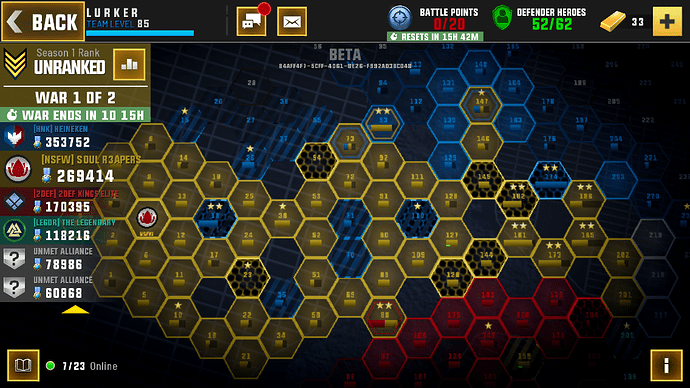 And that’s why I have wrote to HH feedback and the support why they have not put any information how alliance works. Out of the 3 wars they made so many changes and never told what they were gonna be. You know the answer to that. We have so many people in forums and we can learn from each other. Usually it should be a guide from HH explaining what to do and how to recapture. What teams and heroes matter. But they don’t. And that’s why I am seeking answers to questions I have.

Sorry mate. I misunderstood you in that one. I read your text carefully now.

Orange boys is back to devs looking sad, lol. Your leader have the offer to team-up from reds after second day. But he answered with stupid joke. And now you complain what other alliances is bad and unfriendly.

Yes, I also want war without team-ups, but now is only way to win. And if you don’t play together is only your choice.