So I get the chance to test Kurtz on PvP today.

I faced almost all the meta team’s, from Dogface، Kuno, Panzer to Ronin teams, sandbaggers and min/maxers, only team that I didn’t face was mauler cambo.

I didn’t take screenshot of those matches because they were… Hmmm, what’s the word? So easy, yeah.
Only match that I struggled it’s this one, I don’t know exactly why, maybe 6K more power? Idk 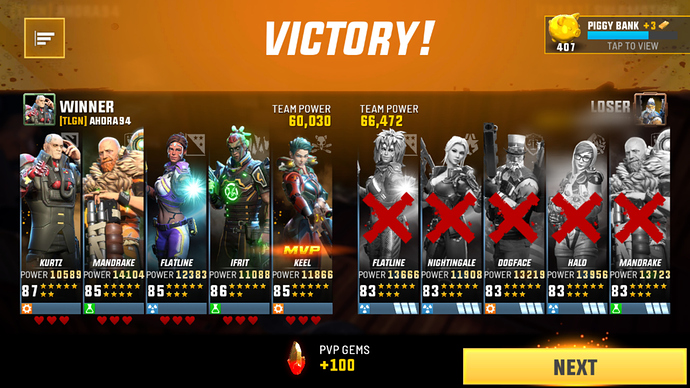 I have to point out that I didn’t use any of Kurtz skills beside his Bronze, keep this in mind, just his bronze and I beat every single team that I faced.
The trick is to stun DPS hero and go after support team, cuz if you attack stunned hero; the effect will be lost.
and my Kurtz skills are not levelled up, only his bronze which is at level 87. 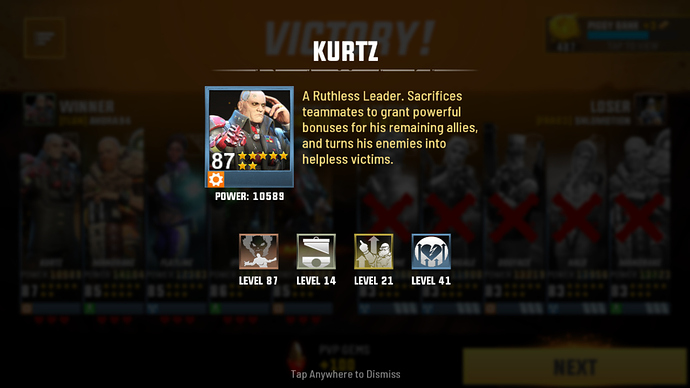 I can’t say anything about his other skills because I haven’t test them yet.
He doesn’t have very high damage output tho, so it will take a little time to defeat your opponent if you’re using him as DPS hero.

It’s okay to say he is OP and a direct threat to all meta team’s in the game. And he is so rare, if you want to get him (atm) you must be super lucky to get him from Kurtz crate, like I get him. or drop some cash on gold and buy Kurtz crate multiple times.

What’s your thoughts on him?

It was obvious in advance he has a long way to be balanced hero. The fact that he is initially 7* hero exacerbates the situation and make a huge gap between Paying and none VIP players.
If his skills are not going anywhere near nerfing, then the first target should be his health atleast. I think he should be squishy and fragile like kunoichi, otherwise he will conquer almost every PVP.

Even with gold, I’ve spent close to 60k gold and still didn’t get him. To make him 7 Stars and op is ridiculous. There is a reason the best heroes are all 3 star heroes… Keeps game balanced. This was a huge mistake on the devs part.

Yeah…I remember that (Wesson, flat, ifrit. …etc) were 3* heroes, so why Kurtz is 7*?? I think they’re better than him

All the 7* heroes are mediocre.

I don’t think that 7* heroes are powerful, I have prophet on 8* and he’s just normal

All the 7* heroes are mediocre

Kurtz is not. he is overpowered.

I don’t see how that’s needed.

Kurtz is way overpowered worse then Panzer ever was… If u hated Ronin, get ready to quit the game with Kurtz.

So few people have him. It won’t be a big problem yet. If he’s OP they’ve have time to fix him before he gets in everyone’s roster.

At 90k pvp range ud be surprised… Alot have him.

1 in 5 matches against Kurtz team.

In my power bracket I know at least a dozen players I face regularly that have him. And that’s only in 4 alliances.

The tourney started two hours ago… And that list is going to show the team that got them most points in a win not the team they used the most.

We’re about same power I reckon. I haven’t met any kurtZ at all yet . I don’t mistrust your experience but i must only talk from my experience.
True that this tournament isnt kurtz main arena

Oh my goodness, idk why they deleted my reply, it’s not my fault that you released a broken hero. LMAO

I’m afraid they would delete this reply as well if I put the same content on it.

I wil make it so simple: You are not going to lose any matches when you have Kurtz (at the moment with the bug’s that he have and if you take advantage of those bug’s)

This is a very cruel character, it is hard to win. I am sure that it needs to be fixed. I play 200+ fights a day, but now I’ve lost all desire to play, because I don’t have a Kurd …

A good player with Kurtz can be defeated 5:0 only by chance.

a good player with Kurtz who know his bug’s and take advantage of it, you can’t defeat him/her until they fix the bug.

Kurtz is far away from being a balanced hero.