This is why I’m losing interest in this game 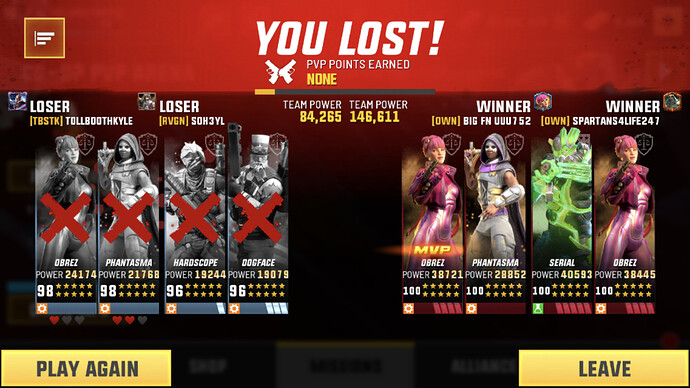 Maybe 3K is too much already

Our world now! is the alliance called- OWN. Always top of every event in almost every teir.

It’s not always the difference it depends on how many real players are online playing. When there is a lot it’s less likely you will play people in your range or computer players because it will always try to match you with human players first.

I think as much as people wanted it over the years and it was asked for so much, coop PVP really is not as popular as normal solo PVP. This creates a mismatch in the amount of people playing so you are matched with anyone who is playing that is as close to your power. This means if your total team power is 60k and there is nobody playing anywhere between 60-100k but there is a 110k total team playing then you are likely to get matched with the 110k. Bots are just not as common in COOP PVP and I think this is what is causing the problem, the devs don’t want people to farm bots but by reducing the chance of facing a bot you increase the chance of facing a team which you should not be matched with.

Bare in mind this is just speculation however, I have no evidence of this and it is just based on what I have seen and understand in the matchmaking.

Not to mention that his team difference is 12k compared to your 3k. I’m not going to lie, this just sucks, and that’s why I generally don’t play co-op pvp as much.

Finding 3 players who are similar to you just doesn’t work on some days, which is why I generally believe the game should never match you up against a pair of players with a greater power difference than 5-10k than you and your ally.

Do you really think, that only 4 players worldwide want to play coop-pvp at the same time. I’m sure, not. People of my ally played at the same time and got also this crazy pairing

I think you misunderstood what I said. I am not saying only 4 people are ever playing at once. I am saying there are no players within that power bracket playing at that time. Think about it like this, there are 3 pools of team power.

When there are not enough high end teams playing then the average teams seem to get mixed in with the high end ones and you end up with one large pool of teams from 41-120k. So when you should be facing bots (which is what happens more often in solo pvp) you end up facing larger opponents because that is all that’s available at that moment you are trying to matchmake. Remember you can’t matchmaking with another coop team if they are already in a match, you can only wait in que for whatever is free while you are. So while your only 4 players woldwide playing comment is not entirely true, it may be that your 4 were the only ones in the que at the moment.

Once again disclaimer this could entirely be false and references to pools may confuse people. I have tried explaining this as simple as I can. This is also highly simplified and does not represent the in game systems

On the bright side, I m helping someone to succeed. 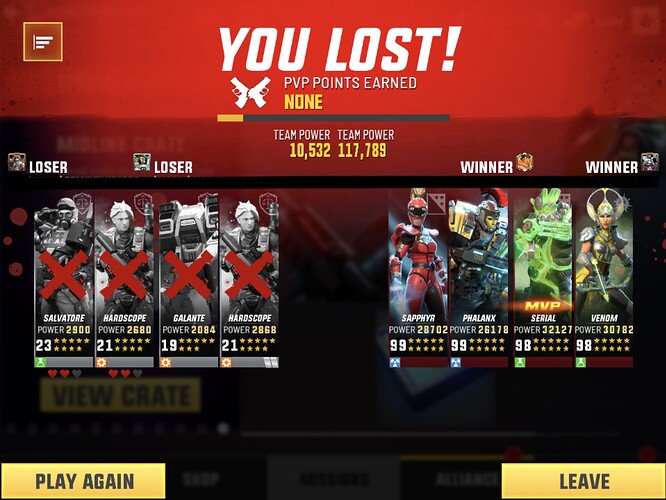 What I think irritates most people is that the matchmaking system is seriously flawed. It has been this way since co-op pvp came out and yet there has been no fix at all. All we get is the usual “don’t like it don’t play” responses. Rather than not playing a party of the game why not fix the major issues with the matchmaking. If it were a once in a while thing it wouldn’t be that bad but when a vast majority of the matches we play are severely unbalanced, it’s time to address the issue.

We’re logging all feedback regarding Co-Op PvP matchmaking, as we log all feedback about any and all topics. As stated before, we can’t reply to every request for comment on the forum. Thanks for your understanding.

Anyone else notice that in co-op it takes dogface about a week to reload? It seems like his reload speed has been slowed down by 50% at least

There is no understanding from me. This issue has been brushed under the carpet for to long. Now when I post up my nightly redicukas matches I get marked as spam. Enough .just fix it

Yeah, I gotta agree with Okelly. Co op would be one of the best parts of the game if it wasn’t for this…

They’ll continue to be moderated as long as you continue to post without following the forum rules. Frustration doesn’t entitle you to a different set of rules than everyone else on the forum.

I never play coop pvp because of these match ups even though it is something I want to play.
I would also love coop campaigns. That would be so cool!

I have said it in other posts and will say it again here: I recommend locking coop pvp to either platinum or gold (players choose between either option). Players then have access to all their heroes but they are each locked to a similar power level at either gold or platinum. Surely that’s a simple fix?

If it seems simple, easy, or obvious, there’s a good reason a particular thing hasn’t been done. Thanks.

What would that reason be?

While we try to be as transparent as possible with our players, we’re not able to provide justification or reasoning behind every decision we make internally as a development team. That doesn’t mean we’re trying to hide anything from our players. It just means that we’re not able to provide answers for every question our players might have, just as we wouldn’t ask you certain questions about your habits and behavior. Thanks.