Things that I'd love to see in future updates

Thanks for reading, and remember all these are the things I personally would love to see, so feel free to comment anything you disagree with or any other thing you would like to change.

Great post @GTSaiko I agree with all the above (I absolutely don’t agree with the cover dmg nerf of Panzer).

From my view I would add in addition:

PS: We STRONGLY need to know where this is heading, we spend a LOT of time and money to build up our strategy and Heros to what is working well, then suddenly all changes and we have wasted our time an money. This bullshit (pardon my Frensh) started with the nerf of Gammon 3-4 months ago, now Gammon is hiding in the closet to afraid to come out to meet other LvL70 10 star platinum Heros.

This game should be about “Shoot to kill”, not “outsurvive the opponent until time runs out” or killing him of boredom. Make sure you test any changes on both a low lvl 10-20k matches, mid level 30-40k matches and high max lvl 50-75k matches as the game and matches are really different between these levels

I agree! There are some that i worked on and they’re nerfed now, feels useless to invest in a player, now. Smh

Great posts, as always guys. I wanted to reinforce what GT said about Bounty being lackluster with weak rewards. As mentioned, Bounty is the big PVE event, it only happens once every 2 weeks. It seems the rewards should be more substantial. I can pvp for three hours in a blitz twice a week and come back in 2 days and still win 300 gold and some extras for each pvp event or I can dump hours over 4 days into Bounty for a few frags and some low level tier rewards. I’ve been asking all along to make rewards for pve more lucrative. Not everyone enjoys pvp as much, but must endure it to get frags, gold, heronium and skin tokens; the last 2 can only be obtained in pvp.

Not to make this pure bounty, @GTSaiko, I agree with 95%~(always keep something up to argue

) but I’ve been saying this for a few months now, bounty needs better rewards, m4rc a top 3 alliance dropped down to top 25 because they noticed it’s not worth logging in.

We’re top 50, but I wouldn’t care if we reduced 8 hours a person to hit top 100, maybe even top 200, bounty isn’t fun, it’s just an endless task to force everyone to hate this game.

These numbers don’t lie, 1 day left and 30k milestone is the last one, next bounty will be even more, we need rewards to make bounty useful again, instead of a anoying chore 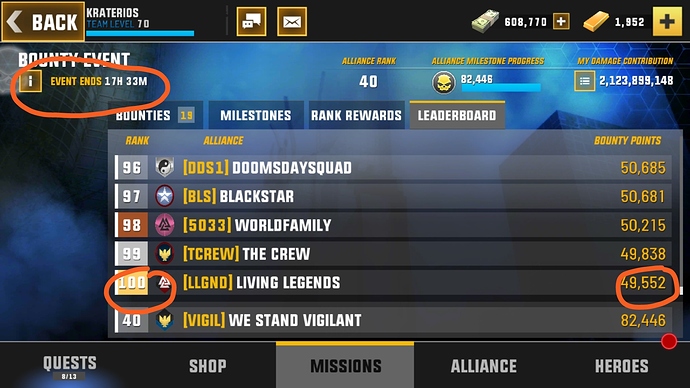 So I made this post in another thread about things that needs fixing. It’s about how most of the black marked pricing is totally wacko and should be fixed.

So I agree on most things. I do like the length of pvp matches as now you at least got a change to turn over a game not just getting killed the first seconds of the match.I agree with Benched on heronium, you really don’t get out so much more use out of it as you can get skin tokens in tournaments. What I’ll be focusing on in this reply is the Black Market and why it needs to change. So the black market is the oldest shop and it haven’t really been update with all the new changes that have hap…

Not much to say after @GTSaiko and @Nailfox posts. I just want to share my own Point of view.

Bounty: This pops up every time around the bounty event and the community has given many ideas how to improve the raid, but nothing happened. I know they read it all, but there should really be a comment by a dev on this issue. They could test two or three different reward systems and afterwards let us decide what we liked most. The only fun thing at this weekend is to see how Maven destroys mech bountys. But this gets boring quite fast too. Most of the raids I just auto to make some damage and reach the ally goal.

PvP: I like the longer matches. A match without Irfit take about one or one and a half minutes, which is a good length. May give a winning Bonus, so that the winner gets 50% extra gems, making it 30 per kill, while the loser still gets his 20. Or a Bonus if you play many matches. 100 Bonus gems for 10 played or won matches. 300 for 20, 1000 if you played 50 (the numbers are just examples).
More usefull heroes would be great. It would help if there wouldn´t be one OP hero very month, which makes one out of three or four team builds necassary. But buffs are needed badly. Many skills don´t even need a Change, just lower the cooldowns. Hecklers energy rockets for example do good damage and always hitting the weakest enemy is interesting. But it has a 40(?) second charge. You can only use it once in a match. Lower the cooldown belo 30 seconds so you can use it twice or three times. Same with Ghouls or Bolts skills.

End game Content: We need that. With the update PvE got even more easy. District 10 on hardmode was a challenge for me before. Afterwards I autot through it with 3* wins at first try. The only challenging raids are the Faction raids, because you may need to use some underdeveloped heroes.

Just wanted to say thanks for all the suggestions here!

We all really appreciate all of them!

1-As always my ultimate demand give us new maps.Lol

4- add more acheivments that is related to the game play
And to increase the diversity in the game especially in pvp add set of achievments related to each hero for example :
head shot kill with bolt
10 headshots by bolt in a single game
100 critical hit with bolt in total

I read it somewhere before, but I forgot in which thread this was.

It would be great if you get a bonus for playing with heroes of the same Faction. For example if you play with two Patriots they both get a 3% stat bonus. If you play with three ist would be 4% and with 5 10%.
That would make more heroes usefull instantly. Hideo is a B-class damage dealer. But if he is inclluded in a team with two other KLG Irregularsand get a stat bonus, he would be A class.
I am aware that it needs to be really thought through and balanced, because Morlocks would be OP if you play Irfit, Maven; Razor, Heimlock and Ghoul/Callidus and get a big bonus to their stats. But this or something simmilar would make team buliding more interesting and would give you more possibilities.

I think that was me, in the “Wesson” thread. Definitely love to see more faction synergy. It could shake the meta up I think.

I don’t know that your all Morlock team would be OP. You get two top notch healers that would get an even bigger boost and while Maven and Razor are good PvP options, they aren’t amazing. You’d lack the games two best DPS heroes (Panzer and Dog) or shielding in that team.

It’d be interesting to see what that squad would do against a UAF team (assuming you would have to put UAF and UAF Airborne together to get enough heroes to fill a squad). Panzer, Nightingale, Hivemind, Butters, and Oracle would give a little bit of everything: top notch DPS, healing, shielding, and support. My guess is that Panzer bursts down Maven right off the jump leaving very little DPS on that Morlock team. And killing Panzer would be tough until you cleared out Gale which would be it’s own challenge with element advantages in place.

It would, dare I say, be fun? Heck, a brawl event that requires that your team be made up of all the same faction would be awesome even with no bonuses. It just means that once you put a hero into your loadout, all other options for the remaining four slots wouldn’t be selectable except for faction mates. Maybe one particular faction would end up being OP but I doubt it would anywhere near as oppressive as the current meta. HHG, MAKE IT HAPPEN!

Some faction synergy would be great, to be honest. Out of these events where we have restricted teams, factions serve no purpose at all. Reworking some of the useless skills to add faction based bonuses could shake the teambuilding.

One thing I’d like to see is the drop rates for equipment in quick wins changed a bit. 600 stamina to get 11 things I need and about a thousand exp that I don’t need since all my hero’s are level 70. The drop rates are out of control. You’ll get the equip you need at about a whopping 7-8%. That’s just ridiculous

Loved every point
Great feedback and fully support it