The problem i have with the pvp

When ever i play pvp im often matched with some one who has a higher team power than memy team power is around 8,500 but i often get placed against people with 10k power or more

I referenced this here, try this out and see if it helps! The more heroes you get and the longer you play the game the easier it will be to find matches with close power.

Yeah but he’s at a lower power then most posted there, so let’s help him here.

Can you please post a screenshot of the team you use while in the PvP screen?

The Problem in low level is that its hard to make even matches, without getting 80% bots. At 8,5k power 1,5k are much. At 50k, its no problem. The matchmaking system doesnt seem to be dynamic enough to take this into account.

Level up your skills. Don’t leave them at 1. I suggest you don’t level up a hero unless you can level up the skills to a decent level, doesn’t need to be maxed, my rule is about 60-70% so the match maker doesn’t penalize me. e.g. If your hero lvl is lvl30, have the skills at around lvl 20 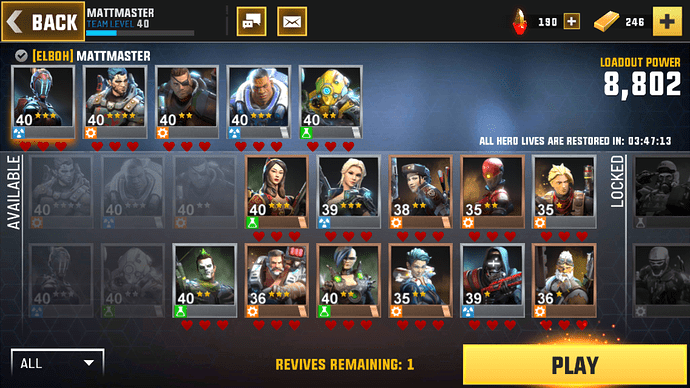 I would try to get dogface to silver, and a few stars up, he’s pretty easy for you to collect right now.

He doesn’t die that fast, and you will be using him for the campaign on the long run.

Can you show us a screenshot of the matches you have in PvP? 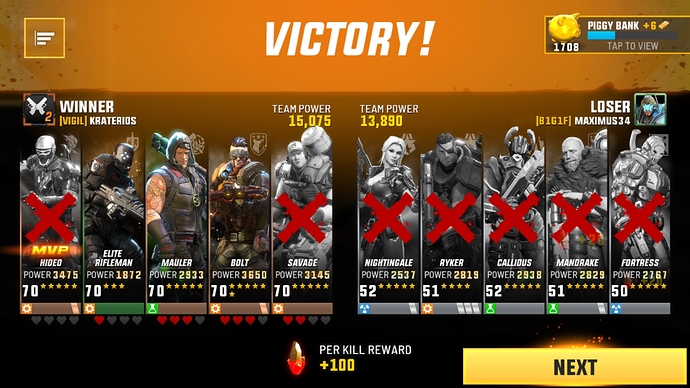 Try playing against the 1%. PvP is pretty hopeless in this game anyway since 80% of what happens is the AI fighting itself and the rest is fighting an uphill battle against the “improved” matchmaking and the same meta teams over and over. 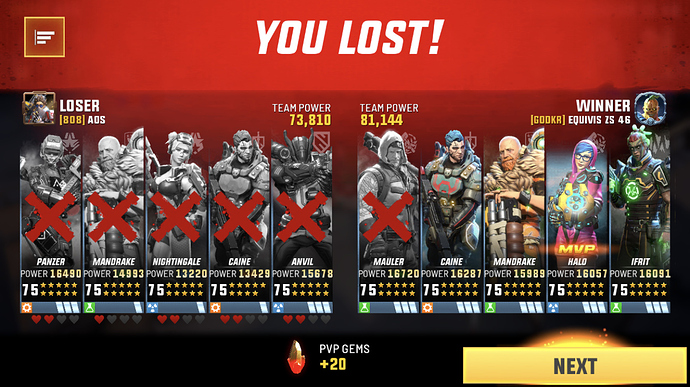 I don’t understand why the game punishes you for having uneven plat bars. It’s not like you can level all your pvp heroes to triple plat as and when you want. Stuff like this pisses me off.

You are right to be mad; it’s silly

Drop rates for plat items is just ridiculous so tell me exactly how it is fair for you to be matched with someone who has 8K more power and 6 more plat bars than you? And for your 9-star plat Caine, I honestly wonder why you are being penalised for that? Is it that the game thinks, ah hah, AOS is being sneaky, doesn’t want to evolve up his Caine… I mean, do they think 1080 mech frags come around every other day?

Matchups like this are just a cheap forfeit for you. I feel for you bud!

Well, this is refreshing; someone who empathizes. Thank you, kind internet stranger. We are of like minds!

I wouldn’t be so quick to jump to that conclusion! I agree with you on one point - that you had an unfair and unjustified matchup, I wouldnt’ say we have the same thoughts on everything

I wouldn’t assume so. Nor is that what I said. Did another game while I waited for your reply though: 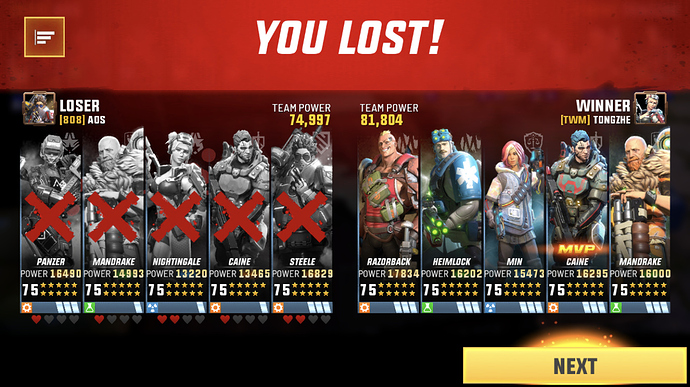 Well… it looks like the game hates you, lol!

Maybe it’s cos you’re using Steele… everyone who uses Steele in pvp gets triple penalties.

Ive been seeing more posts about this since they changed their algorithms to try to penalize people more for min/maxing. I think they still have tweaking to do since that isnt the case here (just poor match making)

It also makes me wonder how much the match making system changes the longer you stay in the que. I know it expands its reach, but by how much? I’d rather play more bots and a few players closer to 3-5k near my ranks then 10k over me and up of real players who I know will win. Maybe thats just me though.

7k difference? from what i’ve seen, it is gale power problem

even though the match-up is ok in my opinion

It’s not just you. Also bots are the obvious answer anyway since even against players 80% of what is going on is the AI fighting itself.