The matching system recently works greater than ever 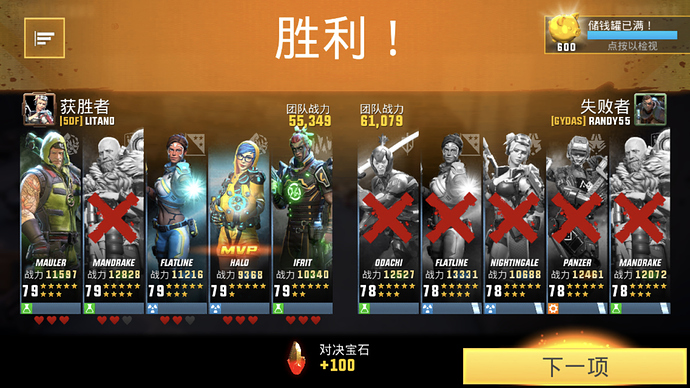 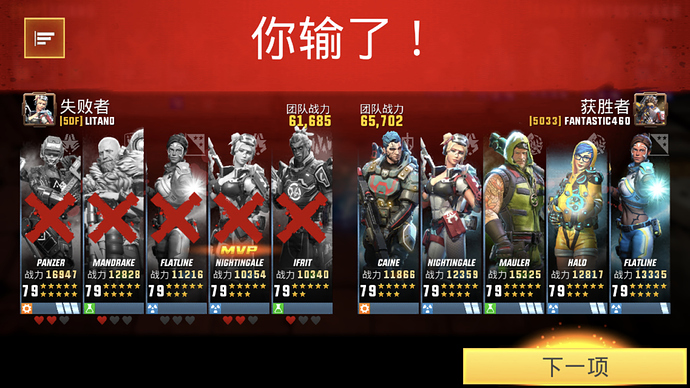 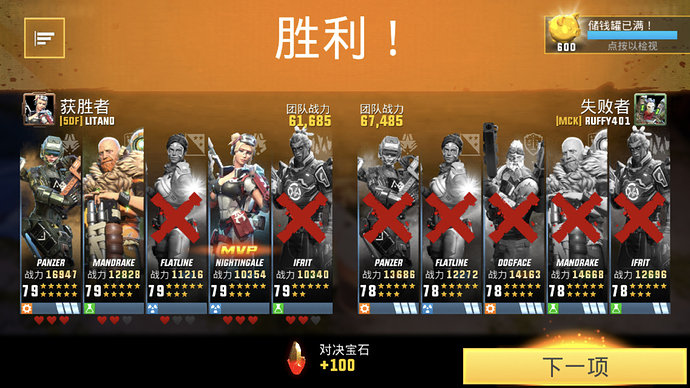 I think the pvp matching systems was updated for so many times for providing a fair experience to users. But the matching system is just like punishing me with so many matching as the pictures above. I can always meet players with team power with more than 4K higher than me. I’d say only 30% matching is in equal power (~ 1k).

Ironically the reply of inquiry or complaint of pvp matching system is always the same. Why the matching with this difference in power is never get explained.

Same for me. I’m finding I’m getting 1k< differences. As long as the power is roughly equal, people shouldn’t complain when they lose.

You’re getting punished for running a 3-bar 10* Panzer alongside no-bar 8*s. The system is doing its job very well here; of course you’re going to get poor matchups when your team is intentionally imbalanced to take advantage of the system. There’s a 60% power disparity on your panzer team for goodness’ sake.

I don’t necessarily agree with OP’s examples but I’ve had plenty of run-ins that demonstrate that something is still wrong.

No penalty for running 4 heroes:

@Sogui - I’m not trying to argue that there isn’t a problem with the system, but these aren’t very good examples.

No penalty for running 4 heroes:

It’s been shown plenty of times that power itself isn’t weighted as heavily as rank/stars in mathmaking. You’re getting punished for have a 2-star difference and 5-rank difference which is the exact same disparity your opponent has. You’re trying to “game” the system by having high stars on your low-rank hero - that isn’t working and you’re being appropriately punished for it.

This one’s pretty bad too but they’re getting a 10% hit on matchmaking so it’s something at least. Keep in mind that there’s only so many people out there that you can match with at any given time so there’s going to be natural variation in matchups. This one looks like it’s a result of low availability to me.

First screenshot his highest is 3354 over his lowest while mine is 3733. Only a 400 point difference in power level yet his team has a 4,200~ power advantage over mine. Ok, maybe his Mauler and Ifrit aren’t that different in star power so I got punished more (way too much imo for the team comps, but whatever…), but what about the next?

Here his highest hero is 3,828 over his lower power hero. Mine is only 3,818. Yet for some reason he has a whopping 5,388 power advantage over me. Not only that, So you are saying the 1*, +2 plat difference vs my 2*, +1 plat difference is reason enough to give him a 5.4k power advantage? Even though the power difference between my highest and lowest is 10 less than his? And not only that, his team is better suited to face mine from an elemental standpoint

I’m no expert here, so excuse me if I’m wrong.

I’m not sure how these affect matchmaking too keenly, but I’m sure those are some of the reasons that you are being penalized.

These ones are just bad luck, but in a normal range you get you opponents from. It is below 10% difference in power. 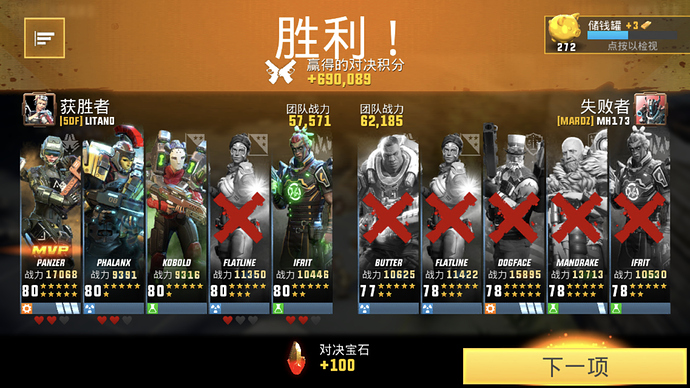 Tano, you are getting punished because your top hero is a 10*, +3 plat Panzer who is 17,100 power, almost 8k higher than your lowest Koblod/Phalanx. Meanwhile your opponent’s top hero is only 15,900 and only has a power gap of roughly 5,400. That’s almost 3k less gap than you have, but his team power is only 4,500 higher. Honestly, you should be getting punished MORE.

Now if you want to look at some real issues, here you go:

In all three of these, I have less of a power gap between my highest and lowest heroes compared to my opponent, yet they have nearly a 5k point advantage on me in each. My power gap is around 4k, while they are around 5k. Yet they get a 5k advantage? How in the world does this make sense or keep happening?

The worst example is the last screen where the guy has a 6500 difference between his Odachi and Flatline vs my 3900 point difference between Mandrake and Ifrit. The only saving grace for me was my opponents were all using crappy Kobold in these matches.

The penalty for running 4 heroes has always been getting a power hit equal to the team average, so if you run a 40k 4-man team, the game matches you at 50k.

The penalty for the spread on my team is nowhere near 10k. It doesn’t matter if the other 4 heroes are close in power, the 5th hero is literally 0, the maximum spread possible.

I will also say that it’s always been my experience that matchmaking has a tolerance of around ~8% of your total team power even without penalties, so at 70k it seems totally possible to hit someone 5k above you for no reason other than bad luck.

If you stop thinking of matchmaking nearly exclusively in terms of power, things will make much more sense. When talking about balance disparity punishment, power has nearly zero bearing.

I know match making isn’t perfect, but please look at * and bars before complaining.

I had crazy stuff happen to me, but right now we see posts where people try to Max stars and bars on 1 hero, not every case but please evaluate your strategy.

I get that, but then look at the second screenshot in my last post. His team has 2 heroes that are both 10*, +3 plat bars as the highest while his lowest is 8*. My highest is 10*, +1 plat or 9* +3 plat while my lowest is 8*. That’s a difference of 2* and +3 plat bars for him while my difference between highest and lowest is either 1* and +3 plat or 2* and +1 plat. Neither of these come anywhere near the difference in stars and bars that he has between his highest and lowest heroes.

One could possibly argue the difference between my highest and lowest isn’t as big, but the power/star/bar ranking of the rest of my team is bigger. Look at the last screenshot I posted though. His lowest two are both 8* and one of them has +1 plat. My two lowest are also 8* with no bars. His highest three are 10*, +3 plat while mine are 9-10* and +1-3 bars. His team overall has a bigger power gap between his lowest and highest.

The only explanation I can think of is there is still a hidden match making algorithm used behind the scenes. If you lose a lot of matches in a row it lowers your rank and you will start facing teams that are increasingly lower in power than your own. If you are winning a lot it does the opposite.

You are not accounting for the natural variation in matchmaking that happens even with a perfect system. There will never be a perfect matchup simply because there are not an infinite number of people playing at any time.

Think about how quickly a match happens. How many people realistically do you think are in the “pool” of available people. Now how many of those are even within 10% of your power? There needs to be a line drawn somewhere between balance and speed. If you don’t want to sit waiting 1-2 minutes for a match, then you need to accept some natural statistical variation.

A 7% difference at that level is not all that much. That’s equivalent to a 10k power player matching someone with 10.7k. I agree that the screenshot you’re talking about is not a great matchup, but you need to understand that the alternative is a sluggish and boring system that increases search time dramatically.

Well the game does face you against bots periodically. I have had a few matches in a row vs them. I could understand it happening during off times, but I usually play during peak hours so it seems weird.

Obviously there will be times when there aren’t better matches and the game just has to put you against teams higher in power. In these cases, it would be nice if your team at least had the elemental advantage. When you are facing a 5k higher team who also has an elemental advantage though, the odds are really starting to stack against you.

As I said before, the only reason I won in the above matches was because Kobold was being used by my opponent and she is pretty lackluster. When I face Mauler teams like this I get absolutely destroyed. When I face Mauler teams actually around my power it’s more of a 50/50. If the game really can’t find more even power matches, it should at least give the player with a lower team an elemental advantage. If that also isn’t possible, make the AI for the team at a disadvantage play better?

Obviously there will be times when there aren’t better matches and the game just has to put you against teams higher in power. In these cases, it would be nice if your team at least had the elemental advantage.

And where is it going to magically come up with a similar team at an element disadvantage? If it’s already struggling to find a match, then you can bet there isn’t someone just queued up ready to go like that.

And introducing gameplay variation as a result of matchmaking is a horrible slippery slope to venture down. You open up the game to a tremendous amount of potential abuse that way.

My recommendation is just to accept that there will be some variation - sometimes good and sometimes bad. If the difference is less than 10% or so, then there’s really not enough disparity to cause a problem, especially if the rank/stars are in a similar range.