The end of Hero Hunters PVP unless they Sort out Yeager’s OP. Solo players keep beating teams of 5 with double the power

I can’t tell you how annoyed I am.
I’ve been considering writing this since yesterday but no doubt, it’ll bring more attention and will be abused even more.

The hero is approx 11k-13k strength but because of his powerful shield and special weapon for destroying the shield, you’re just wasting your time.

The shield has overpowered cool down process, so literally the moment you destroy the shield, Bruce Lee (Yeager) fires off an overpowered passive special for destroying the shield and within a second, he has reinititated his shield, therefore going through the entire process again and again until the end of the match.

You’re literally fighting against yourself because the more you fight, the more your team drop like flies!

In what world is it fair for a solo hero of 11k-13k to beat 5 heroes near 30k strength?
Why are these teams even being paired together?

Please change his cool down speed on his shield. It’s ruined the entire game!

Theres no kill order. You play against 10* 5 bar plat yeagers and hes able to kill your entire team of all 7-9* plats. It is super annoying.

Use heroes with stun abilities and those who ignore shields, lol. Or just don’t shoot and wait. Yeager shield have a timer. This is no Castellian.

Yeager is one of those hero’s that you have to take out early. Leave him alone for too long and he powers up.

Hello Hunters… please give your comment… I must remind you, this is not surprise… This is SUPER SURPRISE !! 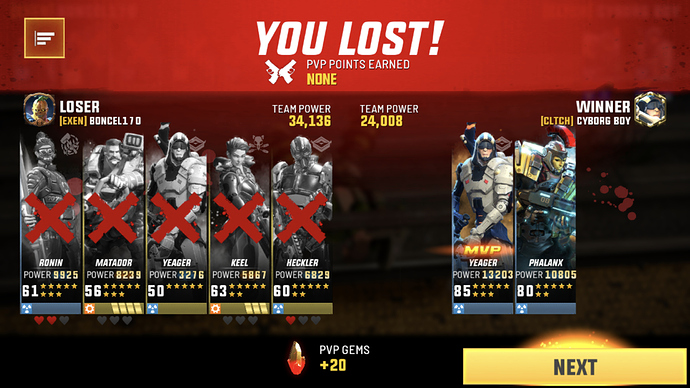 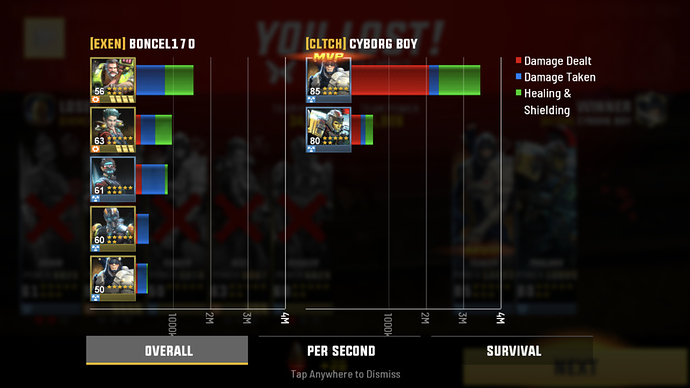 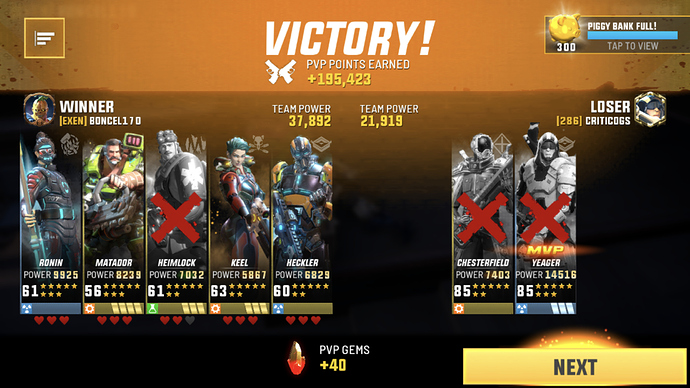 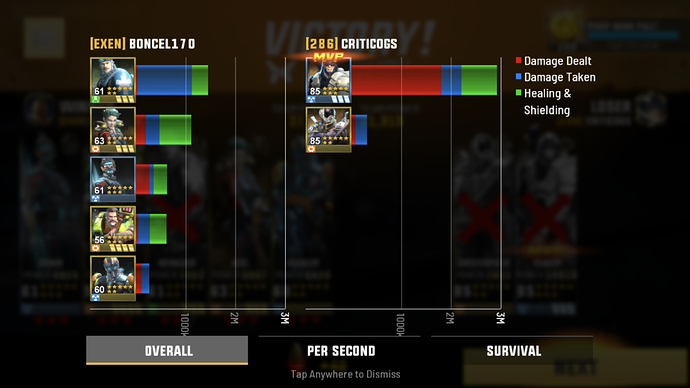 Look at Yeager damage dealt. That is 2M. What is M mean? Millions?? Or MamaMia!? Compare my Ronin and Yeager damage. Even the Expendables Team or The Avengers are afraid to see Yeager!!
And this will make players to play Yeager + 1hero. So PvP is not 5 vs 5, but 2 vs 2

Minmaxers & abusers with Ronin and gold team is cry and complain. This is priceless, lol.

@Murat35 I agree with you, you’re right. This is completely unfair competition. How to prevent a PvP with a hero is prevented in the same way that it should be blocked.

I agree with you completely and that’s my exact point.
How can 1 hero cause 2 million damage in such a short space of time, while everyone else is causing approx 5% of that.

There’s a simple solution, which is to slow down his shield cool down process and then he’s fine.

Exactly that. I told the devs the pvp event will contain 1v5 hero matches, as Bruce Lee has unlimited lives and can take on a whole team on his own, so there’s nothing to lose.

If this isn’t resolved, the game will be full of people fighting fire with fire, so they’ll play 1-2 vs 5 and scare off anyone who isn’t able to earn plenty of heronium to level up but those who can will abuse it as well.

This is a great! I will try using just Yeager in PvP.

Yeager’ bronze and gold is worth minmaxing. Yeager can evaporate everyone if his bronze is lvl 1 and gold at 85.

Due to his fast charging system, he can quickly generate bronze skill.

Yes, I was being sarcastic. The devs can easily fix this by making a Team Minimum requirements of 3 or 4 during these type of PVP events. 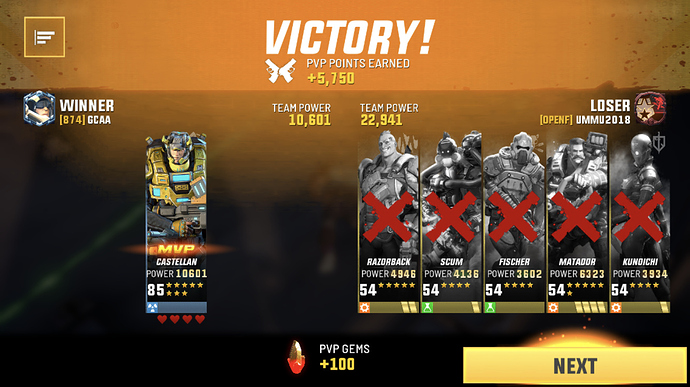 I’m super surprised no ones complained about him yet.

I was going to say Yeager is a problem? Really?! When you are playing in the 80k+ Yeager still is pretty weak. He has extremely low hp and dies very quick (much like Kunoichi). I see this is yet another instance of min/max abuse though. Back to back shields with damage and a chance to stun is definitely a problem when min/maxing with him.

I honestly don’t understand why HH allows min/maxing to still continue. Almost no one is for it, even most people who do it themselves. Not only that, I can only imagine how much it ruins the gaming experience for new players who have no choice but to play with a roster full of sub par heroes AND face min/maxers.

Min/Maxing? Sandbagging? Terrible matchmaking?
I’m not surprised and it’s not a new thing.

Like I always said, I don’t feel it that much now because I don’t play at this power range anymore, but whenever I play with my gold hero’s (between 28K-40K power) I get these things 3/5 matches and it is so unfortunate for a game like this.

With that being said, I don’t think Yageer is OP, I feel he is a balanced hero, if you leave him alone he will broke your team, Just like Dogface but Yageer have shield and the thing that makes him balanced it’s his low health. One point that I am agree is his shield cooldown time, it’s not supposed to be that fast.

Overall, I don’t use him a lot cuz at my power range he is not going to beat any of current meta team’s.

The problem is Sandbagging.

Yup, I faced plenty of teams with 10*, 4 plat Yeager’s without any issues at all. When played normally, he pumps out great damage, but dies VERY fast. He is pretty balanced. IF nothing else he is still a little on the weaker side.

I also tried to use my own Yaeger with a bunch of 3-5 star, silver heroes. He was 7* plat. I got slaughtered. The issue only seems to be with people sandbagging and min/maxing HARD. Like a 10*, 1-5 plat bar Yaeger on a team of all golds or silvers. Any other time he isn’t that great.

Apparently this will only happen if you play with 30-40k power. Because Yeager + 1 hero will be about 20k+ power.

Take a look at Yeager damage dealt, that’s up to 2 millions+ and thats huge.
When you finish playing PvP, please check the stats. See how much damage of your every single hero made. Then compare to the picture i posted.

And now my question is very clear and simple. If you play with 30-40k power, what you feel if you face Yeager, and he deal damage up to 2 millions+ ??

If this keep happening, many players will play this way… And yes now I want to play exactly like that…