@FourFingers, i completely agree with all you said.

This is how I managed to score top 500, and collect some PvP shards.

To bad i made her silver, it would have been easier if I kept her bronze 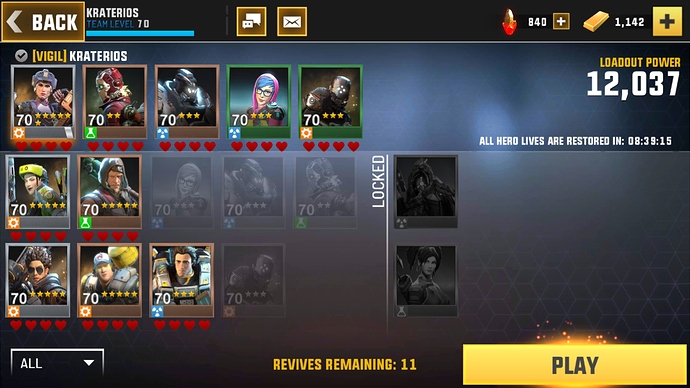 It’s easier to follow discussions and find interesting people in conversations when everyone has a unique profile picture!

And U know what? Dev has never answered, disappointed.
They now care about how many Panzer pack will be sold

Yep, I missed out on the Top 100 by 11 spots (not enough refreshes at VIP5 to keep up with the big dogs this time) but all I ran into were other 9*+ Panzers and it’s basically a duel to see who gets Breach off first.

It’s been a weird month. I’ll miss all the PvP wins a little bit but also looking forward to a nerf - I’m hopeful that maybe they’ll see how such a broken hero can affect things that they’ll work a little harder at balancing. People will cry if you suggest a small nerf to Top-Tier PvP Heroes like Dog but it would be a much, much, much more interesting game if they brought all heroes closer to the median. How much more fun would it be if you could level up Ronin or Fischer to Plat and still have a good shot to win if play well. I don’t think I’ve ever seen either of those guys out in the wild as player controlled Platinum heroes…

The developer’s have been uncharacteristically silent about this. Usually we get an acknowledgement and a we’re working on it post.

This is the biggest gripe. You can see devs everywhere but none in these panzer posts. Makes a bad issue look a lot worster.

If you don’t have a 7* Plat Panzer or higher at this point, I don’t even know how you can stand to play PvP right now…

You do realize that it takes a while to fix something, the problem is you guys aren’t patient. And then u do realize that every month they make changes to any character that has been complained about. This shouldn’t be an excellent and no I’m not opposing the nerf. Just saying how about just be patient instead of rushing a progress or an answer to the nerf outcries. It always happens not just for Panzer (Savage, Halo, Drake, Dog) It takes time, but rushing the devs isn’t the answer. They heard you guys, now it’s time to chill like for real

People should start doing panzer hunting parties. Set your team up yo nuke panzer, even if you fail the round. Get the satisfaction that their panzer has one less life. If enough do it, less people will have her to play with.

Doesnt work. Meta Panzer parties often have Panzer as the only mech hero. Panzer hunting parties get annihilated before they do anything.

Smartasses who say Odachi/Maven counter Panzer should be ashamed of themselves. Odachi/Maven can land every hit on Panzer and the game will still end before Panzer dies, provided the other team is semi-competent.

There’s a hero pretty good at hunting Panzer though, I believe it is called Panzer.

I completely agree with this post. I’ve never cried nerf, nor do I whine about every flaw about this game. However, this may be the last straw for me. This last month has caused me to look at this game differently. panzer being overpowered 8s one thing. A quick fix could solve it, but nothing… Not even a peep from devs about this. The fact they won’t even address it, is not sitting right with me.

My biggest issue with this is how devs are allowing players to basically cheat… For instance, (m4rc) jeffmykelldotcom has a 10* bronze panzer. he plugs in her with all the other event bonus heros at silver levels. Each one of them is set up for min-maxing with how the skills are leveled. Min-maxers are annoying but this is beyond an annoyance. His panzer completely runs through my whole gold, properly leveled team, in one clips. She pretty much one shots each hero, even my 7 star golds in drake and phalanx. You know what, I’ll take a lose. No big deal, but he runs that same team all the way to top 10 in both the uaf PvP events we’ve had so far. Everyone else in top 100 has a mix of plats and golds. That is is blatant abuse of the system. I have yet to see the devs address this at all. Instead they reward him with top rankings rewards. This is probably going to be the last thing that will cause me to delete this game.
I’m VIP 12 and have spent close to $1000 on this game, but I refuse to continue supporting a complany that allows people to take advantage of the system. I’m curious to see how they will handle this, will they continue to allow scum bags to take advantage of THEIR system or will theymake this game more balanced and enjoyable again???

Maybe the health rebalance plus the new hero will counter panzer a bit and balance her out? But even if that is so, I fully agree that Panzer needed an immediate hotfix such as bronze skill loses 20% damage, and her health is reduced by 10%.

A different issue is that pvp matching needs to take into account stacking an 8-10k power hero with a bunch a 3-4k power heroes. Admittedly I also do it now, but it’s just to beat jeffmykell … 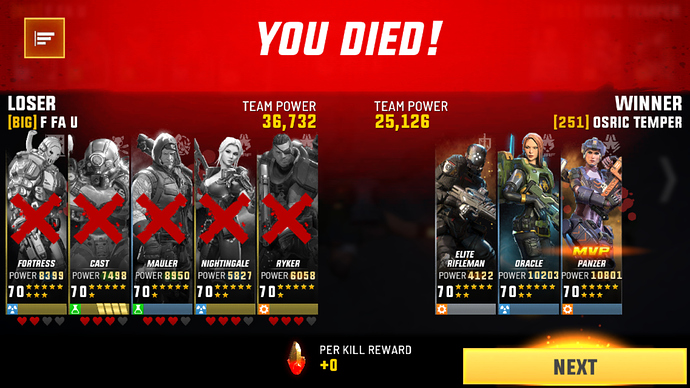 A93A5E9C-4724-4865-BCCB-495ACE7110D6.jpg2208×1242 652 KB
Here’s the new one three of my heroes die instantly at the beginning of the match as you can see there’s two platinum and they both have instant weaponry at the start of the match
Took advantage of Panzer out numbered platinum ability which everybody says is useless
All were talking about is the breach
just automatically load in with the lesser team so you get that Advantage at the start
Panzer power continues to grow
1 Like
FDParan July 31, 2018, 8:29pm 35

Oh my I didn’t see this coming. This is horrible. How do those people come up with such kind of ideas to take advantage of other players??

She is still OP after the nerf…

You think? I think they made a fairly good job on her rebalance.
The extra damage from the Breach & Clear will only set in if you’re LUCKY enough to target an enemy who’s not yet received any damage.

She still seems good but not nearly as strong. Getting rid of breach duels to kick off every match by making it start at 85% is helping a lot. And she definitely isn’t melting blues as fast as she used to. Gotta give it a while to get a really good feel for it but seems like they definitely brought her back to the pack a bit.

Gold skill only works if an ally is dead, starting with fewer Heroes does not trigger the effect.