I don’t know what happened with PvP, but every single match I play is against a min/maxer. Every. Single. One. It used to be against bots most of the time, which was fun and challenging enough. Now the matchmaking system is garbage.

If it’s gonna stay this way, the power increase from stars needs to be nerfed way the hell down, because it just doesn’t make sense, numbers-wise.

Maybe it’s because they punish min maxing so loosely that everyone is min maxing.

Understandable. I don’t know if “punishment” is the right word though. The power system is just wildly unbalanced. Good for the people that take advantage of it, I guess. As a F2P, min/maxing is hard without the constant supply of frags, so it’s not really a viable option for me.

Yeah, there’s min-maxing issues. We all know. It’s certainly very frustrating and makes team comps and testing team comps basically useless. I would say that if you should to avoid min-maxing; the less people that do it the better. If you want a solution, don’t be part of the problem.

Yup. I find myself matched with 17k heros on the opposing team when my highest on my team is 14k. Instant death.

Just a few hours ago… 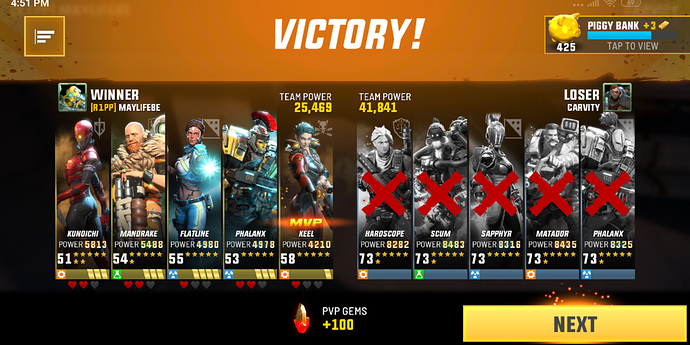 Why are you whining about it? You won.

And that makes it a fair matchup…? That’s the worst I’ve seen in awhile and a great example of a complete matchmaking failure.

Just pointing out that being matched with a bot team of similar Team Power no longer seem to be the norm. Fought at least 10 bot teams with all Platinum tonight, while I had no heroes at Platinum on my team.

Makes sense. I agree that’s a terrible matchup. At least you did win.

Good strategy. If he was able to quickly eliminate the support heroes, the others are left vulnerable.

He does sandbag, and added gold bars, I fight a bot sometimes with similar power but 0 platinum hero’s using maxed gold bars and stars