I’m not sure how much its been discussed or if its even been mentioned before, but I’m sure several would love the idea.

I know Im not the only one who thinks that a certain skin might look a lot better on a favorite hero of ours or perhaps no skin at all, but the majority of individuals would rather run the “meta” skin, either due to the skins defense, crit chance, or damage boost or purely war based and the one that gives you the most power. Considering skins make little to no difference stats wise, Im proposing an idea.

Im tired of facing 4-cep in his rare skin, by no means do I dislike the design since its a very interesting one. Im sure many people would agree, but I would rather use him without a skin, in his regular form. That being said, I feel that we should be allowed to mix up our heroes skins and allow us to personalize our heroes and really make them our own, integrate our own spin with the skins that are available of course and really “express” ourselves through skins lol

I made a rough mock up as to how I would personally approach this idea, something similar, either or. I Included the difference between skins and their overall power to demonstrate the impact players place on having certain skins over others

With Legendary skins perhaps it’d be a lot more difficult to do so since they change a heroes ability, but besides that everything else would be fine,

Please HH, I know a lot of people would love to see something like this incorporated! 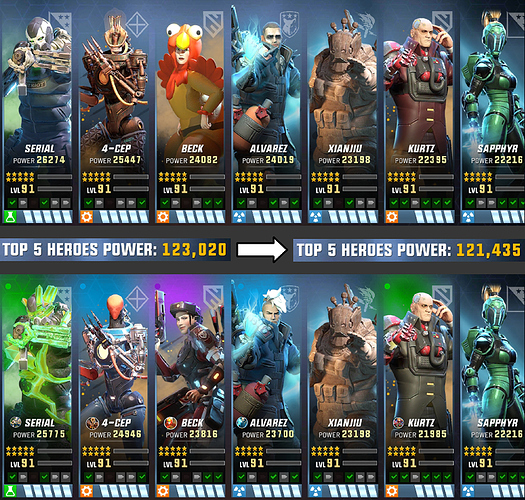 As always: if something seems easy, obvious, or simple, and we haven’t done it, it’s because it’s not.

Thanks for the feedback!

I love the idea but it’s not something that probably worth spending time on in this game, there’s lot of other things to do at the moment, don’t get mee wrong

Yeah, within the post itself I explained that legendary skins would probably be the only exception. Turkey skin is nice shit post skin lol

Considering the amount of skins that are constantly being pumped out, I feel it should definitely start being worked on. Its nice seeing little details such as this being implemented, A lot of people would love it

We were making one skin a month for a short period. 3.0 had a lot of skins because we put extra artists to work to get everyone a Common skin. Go look through the search function! We’ve explained before why skins aren’t as easy as adjusting a color slider like you suggest. They’re not “pumped out.”