Hi devs!
First, I want to say how much I love the game. With new content each month, it doesnt really get old fast.
I have a suggestion though. Seeing how long this game has been running, and with the roster of heroes, wouldn’t it be fun to have a sort-of awards per hero? Like:
Best DPS
Best Tank
Best Healer
Best Design (w/o skin)
Best Backstory
Best Gimmick
…and the stuff. Those who voted for the winner could get frags or other goodies.
Feedback is welcome

There was a Facebook poll event last year which dogface won so we all got some dogface frags for free. Maybe it would be good to do that again

Everyone would vote for Kurtz. 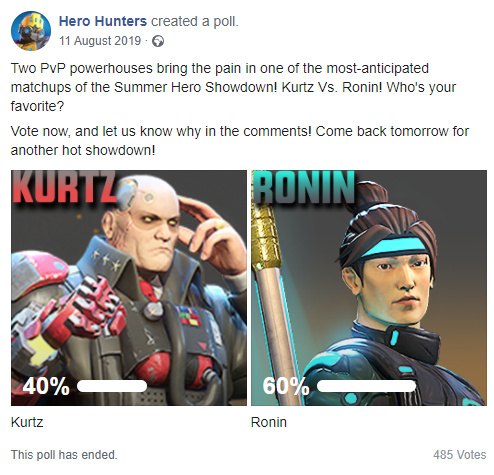 I like the idea. Also agree with Ghastly. Would be cool to earn some frags of each hero that won. The community could vote together

Is the goal just to get free Fragments? What other value would this present, besides “it would be cool to do?”

To give my two cents, it’d be a good assessment of the heroes. Which hero does the community like the most? What hero is the most fun to use? It’s kinda like the expansion of the poll last year.

We could just do a discord/forums straw poll for a HH community awards. It doesnt need a dev stamp of approval or prizes, its just a fun dumb activity.

I think it would also help boost the popularity of this game . When I first saw the trailer of this game through Play store, I was confused whether to install this game or not. There are a lot of games which are wrapped in golden paper on the outside but just aren’t that good. This game is wonderful , I liked it and suggested it to a lot of friends as well but again after watching the trailer, they were not totally convinced to install it, but they did because of me. This Awards can create buzz about this game and bring more players to the game .

Muninn since the last poll there have been numerous outstanding heroes released and the introduction of the amazing 4* heroes plus more people have Kurtz now. Would be good to get another understanding of who likes what hero, we can run it on the forums or on discord rather than Facebook if you would like

I personally think Astrix or Purifier would win as they have been absolutely beastly recently, especially purifier!

You guys are free to do polls and brackets, if you want! Like Gruff said, it doesn’t have to be officially sanctioned if you think it would benefit the community. So long as it’s not harmful, or a misuse of our IP, have at it.