Very good list. I would say this is likely a bit much for one month. Specifically when its posted during this month. Realistically this stuff wont be handled yet. However, some items are relatively easy to adjust and all are reasonable within the next few months imo.

I think you’re dramatically over estimating the ability of the developers here. No offense meant. Based on previous updates, you could maybe hope for like a 1/5th of the content on this list.

Added an additional suggested improvement to the UI as below:

They are actually working on that or are at least have it on their list. They stated that in…can’t really remember…June or July or so?

Fantastic list, agree with everything. It would definitely improve game experience and make it more enjoyable!

Just thought of Another Thing… do skills really need to cost so damn much?

Relook skill costs and rescale them to what is reasonable.

Let’s add the removal of xp rewards from crates. They’re already given out like candy in campaign. We don’t need them in crates as well.

You do not even have all your heroes at level 75 and want less XP? I can just speak for myself, but if level 80 comes anytime soon I will struggel to upgrade just half of my heroes. 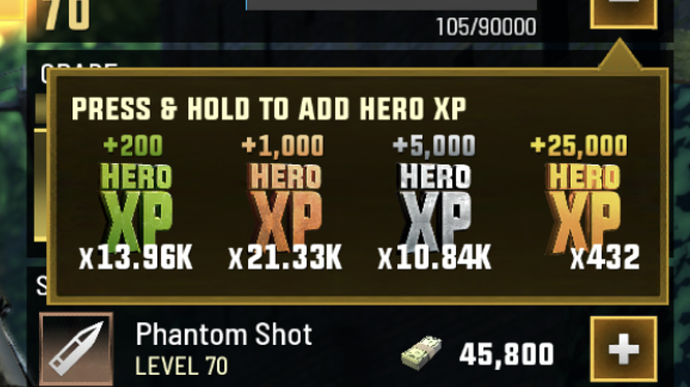 I do not demand more XP, it is fine as it is. But if they lower the XP income, we will all struggle in the long term. Since we at least need to upgrade our heroes to level 85 to max out all plat bars.

I made a thread about this before and asked a dev in vip chat. They are working on it but had no ETA when I asked

Please replace Pris. Either that or buff her significantly. I’d bet that she’s the least purchased hero in the PVP Store.

I personally wouldn’t like her to be removed but rather buffed. I’m definitely biased as I have her at 10* but never use her

Crazy to see people arguing in favour of keeping Pris in.

I mean, it’s totally rational on the individual level but, it’s crazy that the game is made in such a way that incentivizes getting as many frags as you can for a single hero regardless of whether you actually like/use them.
Facepalm

Duuude, come on. For the player base as a whole man, not just for a few.

I trust its not coming from the same place as your ‘don’t touch Nightingale, nothin wrong with her’ comments!

Wouldn’t be happy is she was removed, but it would be the same for me as matador, to bad, now I need another one haha

She really isn’t that bad though, she deals decent damage in a bounty

I agree with everything, but I hope they just expand the PVP store content instead of removing some cycles. =( People will be motivated to play more PVP if they have more options to buy with their PVP currency.

Hi HHG, we as a community are hoping you will deliver all the items on this list – thanks!! These things are what the game needs.