So I’m having difficulty with Stratus Sphere Easy 1. I’m using as many Terraventa heroes as I have (which aren’t many) and Icebox, as well as all of my best most powerful heroes, and I’m getting nowhere . It is also 29,000 power which is a lot for a self proclaimed Easy level. Am I the only one having this problem?
As I continued playing this mode, I realized the Venom and Jackal have the increased health (and I’m assuming damage) buffs in this mode. Is this an accident? I’m asking, I don’t know how modes like these were meant to be developed since I started back up during the GunderDome (but even that wasn’t that hard on its first level). Maybe though the enemy’s skill level is based off my skill level like with the Christmas sim?
Am I the only one? Do I just need to level up my Terraventa heroes more? Is this all intentional and I just need to get better?

The devs said they’re looking into this on discord, give them time

To be clear: we’re investigating your concerns. That doesn’t necessarily mean we’ll be lowering the difficulty. We’re investigating. For now, I would carry on under the assumption that the event is what it is, and any changes we make, if any, would be a happy surprise.

I would highly recommend you check out my extreme mission guide, it has a lot of endgame tactics for hard missions and a lot of different teams that may work. I am level 100 and am finding the team below to work perfectly, I pop serial’s shields at the start of the mission and Mariana kills the rest.

PLEASE READ BELOW AND CLICK THE DISTRICT IMAGES TO GO TO THE GUIDE WHICH HAS BEEN MOVED TO THE WIKI This is a guide intended for players who are looking to start completing the extreme missions. Previously, this guide included screenshots, videos and guides on the forums but this has become unsustainable due to the size of the guide. Because of this, it has been transferred over to the Hero Hunters Wiki. Below you will now find links to the wiki pages for each district as well as any oth…

Similar to the Gunderdome there is a trick to the start of the mission to avoid being instantly killed, see this video here:

But in case you are wondering how it works then see this video here of me beating the Stratus-Sphere with an example team and using this trick:

If you don’t have Ruby heroes then try using Kurtz execute technique, in this video Kurtz dominated but you can use flatline to revive if he cannot execute an enemy.

Yeah the devs don’t care if anyone completes this raid. Gunderdome or whatever that FF raid before was a huge disaster and the last time I’ll try to play one of these. That and this one, plus their response, shows that they’ve designed a paywall around the Forged Fantasy heroes, but don’t have the professionalism to say it out loud. Game is a wreck now, don’t expect any fixes.

As I said: we’re investigating. We may find that it’s too difficult, and make adjustments. We may not. What I’m saying is, don’t sit and wait hoping for a difficulty adjustment that MAY not come.

I’m sorry the game has made you angry, and hope you find peace in the future.

imagine tomorrow the other 4 kkkkk

I tried this out but with a kobold instead of kiyoshi (since I dont have one) and it works. Thanks friend

It think this raid has the same difficulty scaling across the board. In other words, you and I are seeing the same health on the enemies.

The Forged Fantasy enemy heroes have increased health, it’s on purpose. The Gun-derdome was the same way. Get rid of the FF enemies first.

I ran the same team as Gun-derdome, which is Serial, Shivs, Hivemind, Duran, and Flatline, all ruby and 10 stars. Serial is key. I take out Gunsmoke (mech), then Poison (biochem).

I saw your account though, you’re lvl 61 and no Serial, so try to work on Poison and Hivemind, and the other bonus heroes. The enemy Gunsmoke and Poison are the biggest threats. Hivemind gives up to five extra targets for them to shoot, two of which taunt. Maybe try Poison Shivs Kobold Hivemind Flatline.

Everyone in this thread - USE THE EVENT BONUS HEROES. This same topic came up last time and it’s the same situation. They’re bonused for a reason. 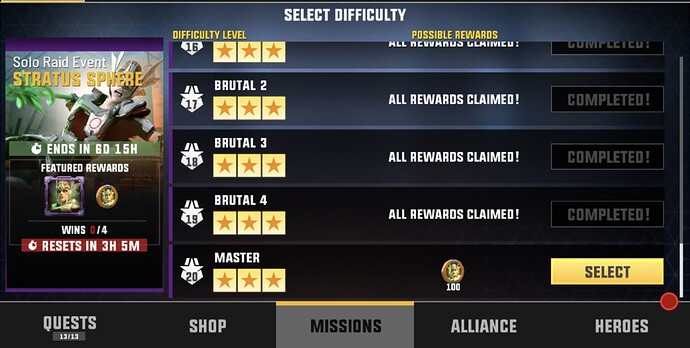 It is too hard.i use my all powerful heroes but not win easy level 1.it is impossible to win easy level 1 for those who not have bonus heroes.i hope hero hunters community will fix it.i think only vip’s can complete all level.

I am a free to play gamer. And i am still pretty much struggling with this raid if you notice i have an extra power bracket of approx 6500 which is supposedly enough to beat the level, but the most i could do was kill 2 enemies. It wasn’t even a battle they literally exterminated my team.
All i am saying is this is really tough on free to play players, i honestly believe that you can change the difficulty. These events are like the only few ways i can get better characters.

Yeah I don’t have serial yet but was able to two star the first 12 with siren and kurtz execute. IDK if this helps anyone but you can at least get SOME tokens for the crate that way.

I have seen a decrease in difficulty from the past few days, and I would like to thank the devs. They removed the buffs from the enemy Terraventa heroes. I tried a bunch of strategies to get through easy 1 and promoted Halo to plat, and now that it is not as hard, I plan to be able to get through the event a lot farther than before. I know it must be hard being a dev and always being criticized and asked for more content, but thank you to focus on fixing this. Also happy lunar new year a few days late