Stop with new Hero every month!

Currently we have 65 hero’s in game
Really is it not enough?
I think it is (for two months)

We are getting hero fragments from solo raids.
Instead of making a new hero every month; give us one of hero’s fragments (boosted faction) on co-op raid.

I completely agree, but it is about MakiMaking money with the new heroes. They be in crates. Ppl will buy gold to max it out

I agree with you, but for not the same reason.

The game can always use more heroes. They add a lot of new content, dynamics, and ways to play. 65 heroes isn’t even that much. I’ve played other games which have had 100+ on launch, and the game does perfectly fine. The balance is good and there are a lot of ways you can customize them to make them more effective.

However, I do think they need to ditch the once a month model. I think that it takes away from other content in the game. I would much prefer a new game mode and have a hero delayed for a few months. The once a month model also doesn’t give the devs the time to quality control, meaning that bugs and broken heroes are more prominent. The fist few heroes that were introduced under the one month model, Panzer and Ifrit, were game breaking, Panzer because of her sheer power, and Ifrit because of an invincibility bug and his revives.

Also, what other reasoning do you have for not introducing new heroes? You never state why you’re against the once a month system, you just state an alternative that I, and possibly man others, would consider worse (Plus the game already does that, there are co-op raids that give out lots of frags for featured month heroes).

We don’t need less ways to play, we need more.

what other reasoning do you have for not introducing new heroes?

I’m not against new hero’s, 1 hero every two months it’s fine, not every month because of what you said before:

The once a month model also doesn’t give the devs the time to quality control, meaning that bugs and broken heroes are more prominent.

However, I do think they need to ditch the once a month model. I think that it takes away from other content in the game.

I agree and I think if devs bring a new game mode, it will be more fun than having new hero every month.
Something like this would be a good idea:

The idea is simple For example: Player 1 using Dogface Player 2 using Mandrake Player 3 using Heimlock Player 4 using Nighingale Player 5 using Flatline Also it can be with 3 hero’s People can invite players from their friends list or alliance members or they can join automatch. Game match a group with another group who they are online at the moment. I know this idea needs a lot of work and some edits, but it can be really fun if developer’s do it for us. What you think? And sorry fo…

I don’t mind the once a month hero. It used to be 2 heroes per month.

But more attention/focus does need to be applied to balancing new heroes for sure. I think you also need to take into account the kafuffle experienced once platinum skills were unlocked. Instead of the usual 1-2 heroes to balance, they had the full armada that had to be brought in line.

Having said that, I think they have brought that relatively under control and the last hero (Anvil) seemed pretty well balanced from the get go. In my opinion at least.

Trading coop in-alliance, + helping out others in vip/general chat gets me the new hero pretty fast.

I’m finally at a point where i can farm heronium. so i can make the new hero 5-7 relatively easy in the month he’s out.(just got heronium farm and wanted to boost a few heroes)

I think as long as you do your pvp everyday, participate in pvp events, well all events in fact, you don’t need to buy hero with real $$.

On the other side, i also agree that other game modes would be more enjoyable than playing with a new hero i probably won’t keep in my lineups after the end of the month.

It would also give time to level up other heroes you would want to play with, that always have to take a backseat to monthly-faction + new hero

Yes, I’m curious about this event as well. It would be nice to have more details…

(Remind myself that I need to put some love into Min)

We have a Min event coming? Where did you see this?

I also missed this one before some people mentioned it 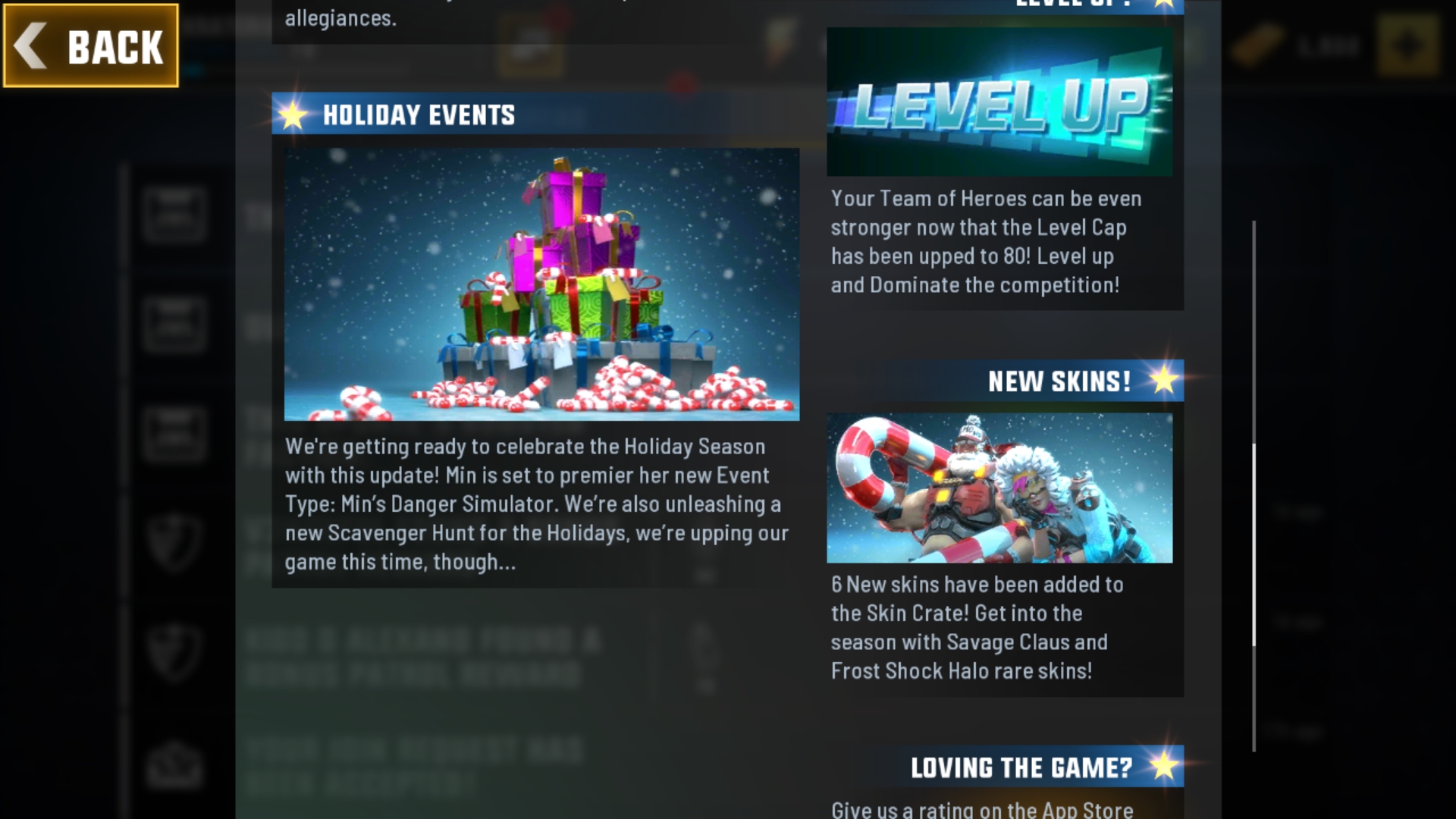 The new hero a month is likely necessary. It keeps the devs employed as new heroes make money. New sections and play modes dont. New heroes also keep the player base stable. Introducing new heroes effects all methods of play and keeps it fresh for long standing players. New play modes or new campaign sections alone will not keep the interested in the same way new heroes will over the month.

The only other alternate I see is making this more like a card expansion every 3 months where 3 new heroes are released at the same time. But that may be too long before new content is introduced in a game such as this.

Ah. The Christmas event. Yes I knew this was coming. Did not pick up that it was Min related though. Thanks for pointing it out

I think those are 2 separate events though. At least the wording is insinuating 2

You’re right, I think the time has come for a small break.
This month of December I would have left very quiet without too many commitments and with the time to upgrade our heroes especially after a November with three rounds of bountys

For me it is the monthly raid that lets us get the new hero keeping me in the game. I personally prefer a new hero each month that can potentially take the entire game by storm!

I wouldn’t mind seeing a break in new heroes every 3-4 months. So we get 1 new hero every month for 3 months, then the fourth month they take time to balance stuff and do not introduce a new hero. Fix all the crappy heroes, balance the OP ones, and maybe give us a fun holiday event.

It could work out well if they took off December, March, July, and October for new heroes and gave us massive balance updates and holiday events instead. I don’t think pumping out half baked heroes just so we have a new hero every month really helps the game. Does anyone even care about new heroes if they aren’t OP game breakers? Kobold, Wesson, and Anvil seemed decent, but not like anyone was itching tog get them.